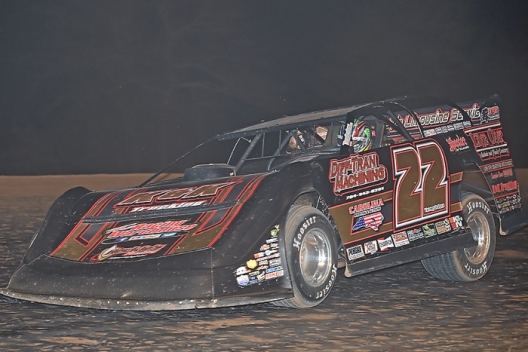 COCHRAN, Ga. — A nice, smooth march to victory was just the outcome Chris Ferguson was looking for when he headed south to enter Saturday’s Schaeffer’s Spring Nationals event at Cochran Motor Speedway.

Erasing memories of two bad-luck mechanical malfunctions during last month’s Georgia-Florida Speedweeks that left him shaking his head in frustration, the 29-year-old driver from Mount Holly, N.C., put himself back in a winning groove with a $10,000 triumph in Cochran’s 60-lap feature.

“I really think that we’ve finally turned the corner here,” said Ferguson, who began to rebound from his Speedweeks disappointments with a third-place finish in March 16’s Carolina Clash Super Late Model Series show at Lancaster (S.C.) Speedway. “When I have a race car like that, as long as I don’t screw up, I think we can win.”

Ferguson was virtually perfect in leading all but two laps of the A-main behind the wheel of his family-owned Sweet-Bloomquist mount. He came off the outside pole to run the top side of the track by polesitter Ross Bailes of Clover, S.C., for the lead on lap three and never looked back en route to his first career victory on promoter Ray Cook’s Spring Nationals tour.

A caution flag with six laps remaining wiped out Ferguson’s half-straightaway advantage and gave fifth-starter Michael Page of Douglasville, Ga., a final shot to steal the glory in Cochran’s first-ever Spring Nationals affair, but the standout racer known as Fergy was more than equal to the challenge. He pulled away following the restart to defeat Page’s Troy Baired-owned Stinger Race Car by roughly the same margin he previously held.

Bailes chased Ferguson for much of the distance after ceding the top spot but suffered a cruel fate on lap 41 when his Barry Wright Race Cars house car slowed with rearend trouble as he held the runner-up spot.

Following Bailes’s departure, Page, who already has two special-event victories in the Southeast this season, tried to add a third to his ledger. He couldn’t summon enough speed to dethrone Ferguson, however.

“The car was flawless,” said Ferguson, who won three features in 2018. “We worked on one problem that we had all week and we finally got it dialed in for the feature.

“This track was flawless,” he added. “There’s not a rough spot on this. It’s just so fun to come down here and race. I’m excited for the World of Outlaws race here (scheduled for May 31). This place is gonna be awesome to race on again.”

There was an emotional component to Ferguson’s checkered flag as well.

“My dad (Bryan Conard) come down here (after) his brother actually passed away last night,” Ferguson said in victory lane. “This win was for my Uncle Danny … it’s just amazing how God works.”

Page found satisfaction in his bridesmaid finish, which came after he struggled to a 13th-place result the previous night at Oglethorpe.

“It did way better from last night,” Page said. “Went to the shop after last night and worked all day and got it way, way better. But still, when it gets working, it kind of goes away.

“I really wanted to run high in (turns) one and two (on the final restart) because we was riding around and it felt really good, but I was afraid if I didn’t clear whoever, I’d be stuck on the outside of three and four and I’d lose everything I gained. So I just kind of rode and hoped they’d burn up their tires or something.”

McDowell, meanwhile, took his third-place finish and moved on.

“We just missed a little bit,” McDowell said. “We wasn’t as maneuverable. I think we was gonna end up second and we got shuffled back on that (mid-race) restart.”

The first of the race’s three caution flags flew on lap 30. During the slowdown, Lucas Oil Late Model Dirt Series regular Tim McCreadie of Watertown, N.Y., who was a surprise entrant in the weekend’s Spring Nationals doubleheader, pitted with a flat right-rear tire on his Sweeteners Plus-backed Longhorn house car. He rallied to finish seventh, one spot behind the Big Frog Motorsports entry of hopeful Spring Nationals regular Ivedent Lloyd Jr. of Ocala, Fla.