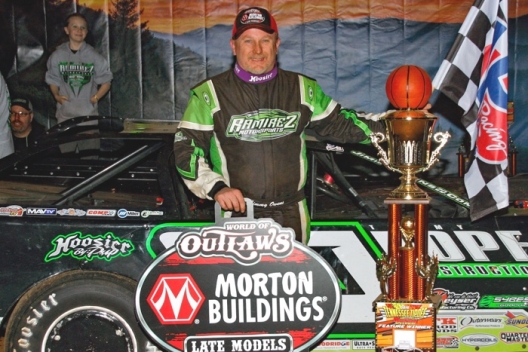 MARYVILLE, Tenn. — Jimmy Owens knew it was important to get ahead of polesitter Brandon Sheppard early. While Sheppard, of New Berlin, Ill., has been very difficult to pass during a five-race World of Outlaws Morton Buildings Late Model Series win streak, Smoky Mountain Speedway, with its long straightaways and high speeds, puts a premium on aerodynamics. Clean air is a must.

Owens, of Newport, Tenn., knew he’d have a much better chance of fending off Sheppard’s advances than he would trying to get around him once the field began to fan out around the sprawling half-mile east Tennessee oval.

“It was real important,” said Owens. “Brandon’s been really tough. We needed to get him chasing us rather than us chasing him and we’d have a lot (easier) time winning.”

Indeed he would. The second-starting Owens grabbed the lead on the opening lap — he barely nosed ahead of Sheppard to lead the first circuit — and went on to pick up a popular victory at Smoky Mountain on Saturday evening. Often enjoying leads of more than two seconds, Owens led all 60 laps. He kept Sheppard at bay throughout the main event on the way to his 13th career World of Outlaws feature, a win worth $12,000.

While Owens was in control of the race throughout the distance, he did have to withstand restarts following three cautions while also negotiating lapped traffic over the final 10 laps. The slower cars posed the biggest test.

“I was a little concerned because really when I was running the high side through (turns) three and four up there coming off of four it felt like it might have been latched up a little bit up there,” said Owens. “When I caught the lapped cars earlier, I could make a little ground up up top there and I come off that corner really good, so I was really concerned. I kept looking over my shoulder for somebody to hit that high side and come around me. But I know the bottom kept getting a little better and a little better, so I was expecting it, but I never saw it.”

Sheppard never let Owens get too far ahead. With 10 laps remaining he trailed by 1.499 seconds, but began to cut into the deficit as the leader tried to work through traffic. Sheppard was hoping the traffic could give him a chance to sneak by.

“I thought it would be (my only chance), but the cautions came at the right time and everything played out in his favor tonight,” said Sheppard. “We could get there, but he was running the right line to where it would be hard for me pass either way. We’re happy. We’re definitely not hanging our heads over running second by any means.”

Chasing what would have been a record-tying sixth straight series victory, Sheppard searched for a quicker line, one that would perhaps catapult him into the lead. But Owens never let him get close enough.

“My crew did a good job signaling me and stuff so I kinda knew where he was at the whole time and when they’re up close to me I could hear him on me there toward the end,” Owens said. “But I felt like he wasn’t going to go nowhere because I couldn’t go nowhere.”

Notes: Eighteen drivers finished the race with 16 completing all 60 laps. … Owens won by .803 of a second. … Weiss, who started ninth, made a late charge, taking third away from Lanigan on lap 43. … Lanigan, who left Georgia-Florida Speedweeks in sixth place in WoO points, 26 markers behind Sheppard, managed to make up spots during the tour’s two Tennessee stops, but actually lost ground to Sheppard. After Smoky Mountain, he’s tied for second in the standings, but sits 42 points behind the leader. … The race was slowed by three cautions, none too serious. Vic Hill spun on lap three; Dennis Erb Jr. stopped on the front stretch with a broken right front shock on lap 39; Devin Moran spun on lap 40, collecting Josh Richards who had no where to go. Richards reportedly jammed his thumb in the crash but was OK. ... Smoky Mountain hosted the WoO for the eighth time, that includes two visits last season. Previous winners include Rick Eckert (2004), Shane Clanton (’13), Scott Bloomquist (’15-’16), Brandon Overton (’17), Chris Madden (’18) and Dale McDowell (’18). … It was the first race at Smoky Mountain since owner Roger Sellars reconfigured the speedway’s turns in the offseason by widening them and taking out about six degrees of banking.