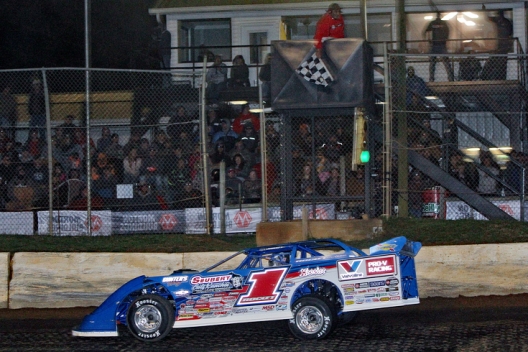 WHEEL, Tenn. — The Brandon Sheppard Express rolled into Tennessee Friday for its first of two weekend stops and it was business as usual for the New Berlin, Ill., driver and the Rocket Chassis house car.

Continuing an onslaught that began on the second night of the DIRTcar Nationals at Volusia Speedway Park back in February, Sheppard notched his fifth consecutive World of Outlaws Morton Buildings Late Model Series victory. It wasn’t necessarily a dominating performance, but Sheppard was hardly challenged after taking the lead from polesitter Chase Junghans of Manhattan, Kan., on lap 26.

Sheppard, who inched ahead by a whisker on lap 10 but surrendered the lead a lap later, paced the final 25 laps for a $10,000 victory, his fifth straight on the national tour and sixth straight overall (he also won the March 16 Lucas Oil Dirt Late Model Series race at Indiana’s Brownstown Speedway). Junghans, who was the overall fast qualifier and winner of the first heat, settled for second after leading 24 of the first 25 circuits.

Tanner English of Benton, Ky., drove Alabama car owner Tommy Pope’s No. 22 to a third-place finish and World of Outlaws rookie of the year contender Ricky Weiss of Headingly, Manitoba, finished fourth after starting eighth. Sixth-starting Kyle Bronson of Brandon, Fla., was steady throughout the 50-lapper, improving one spot to complete the top five.

Though it took the third-starting Sheppard half the race to assume command, no one had anything for him after he grabbed the lead on lap 26. And while he and Junghans did have a spirited battle for the top spot early in the main event, the track’s two grooves became a bit narrow late in the distance.

Sheppard moved to second on the second lap and then began to stalk Junghans. With second-starting Chris Madden of Gray Court, S.C., charging the outside, the top three cars ran nose-to-tail and often side-by-side in the opening laps. Madden’s hope for his first career victory at Duck River disappeared on lap 17, however, when, during a caution for Bobby Pierce of Oakwood, Ill., he had to pit for a flat tire. Madden returned to the rear of the field, but was never a factor in finishing 15th.

Sheppard looked high and low in his effort to grab the lead from Junghans before finally slipping by on the outside.

“I was just kinda judging off of him and I found a pretty good arc into the corner that I was able to get a run on him,” Sheppard said. “But then I think one of his guys moved him down in the bottom and that left the middle open.”

Sheppard took advantage of the extra room through the middle and darted by into the lead, almost immediately pulling ahead by a full second. With lapped traffic looming ahead, he eased back, kept the blue No. 1 in the preferred groove and finished .660 of a second ahead of Junghans, who was happy with second place, but perhaps not quite satisfied.

“When you’re out there leading, you’re just kinda searching where you need to be,” Junghans said. “Their car’s really good, but we’ve been working hard on ours and I can’t thank my guys enough. Hopefully we’ll get another podium tomorrow if not a win.”

Notes: Eighteen of the 24 starters completed all 50 laps. … The race was slowed by four cautions, none serious. … Duck River hosted the WoO tour for the fifth time in series history. Their have been five different winners: Sheppard; Eric Wells (2013); Darrell Lanigan (’14); Dale McDowell (’16); and Mike Marlar (’17). … Bobby Pierce saw his first-ever trip to Duck River end on lap 17 while running 11th. “I got a pin hole in the radiator and at the same time got a little pin hole in my tire. I’m thinking this track might have some sharp little rocks,” said Pierce while loading his car. … Third-place finisher Tanner English said his Tommy Pope-owned car wasn’t bad, but there’s room for improvement. “This Longhorn car’s been great ever since I got in it. I think if we fine-tune it a little bit it’ll be real good,” said English, who won a weekly show at Clarksville (Tenn.) Speedway in the car on March 10. … Among drivers failing to transfer to the feature: Don O'Neal, Tyler Bruening, Eric Hickerson, David Seibers, Scott Cook, Caleb Ashby, Christian Hanger, Clint Nichols, Josh Putnam, Michael Chilton and Brad Skinner. … After crashing his primary car in his heat, WoO rookie Blake Spencer of St. Augustine, Fla., started the feature in Hickerson’s car. He made one lap and parked it. … David Brannon of Elora, Tenn., was the lone local driver to crack the starting lineup. He finished 14th after starting 10th. … Putnam of Florence, Ala., was the second fastest qualifier in the second group and started on the pole of his heat. But after an early spin, he was caught up in a second wreck (one that collected Spencer) a few laps later, ending his bid for his first-ever WoO win.