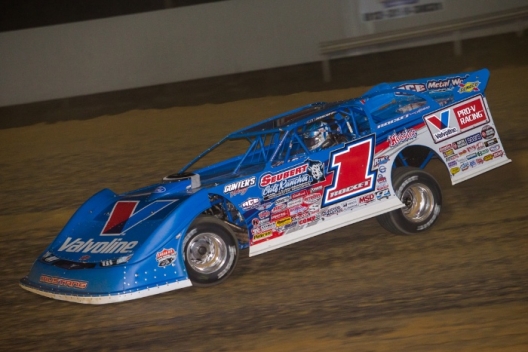 It was a perfect night for Sheppard, who clocked the overall fast time and won his heat race to start on the pole of Saturday’s 50-lap main event. Charging the front of the field at the drop of the green flag, the Rocket Chassis house car driver led the entire distance to notch his 12th career Lucas Oil Series victory and first-ever win at Brownstown.

“It seems like every time we come here, we’re up front at the beginning of the night and I guarantee my dad and grandpa sitting at home thinking, ‘Oh here we go, another repeat. Start on the pole and go backwards like normal,’” Sheppard said. “This thing is just awesome right now. I wish there was a race tomorrow somewhere because we’d probably be there.”

Sheppard successfully worked his way through lapped traffic, setting a torrid pace over the field through early and middle stages of the race. A lap-48 caution allowed second-running Devin Moran of Dresden, Ohio, to narrow the gap between himself and the race leader in the final circuits. But it was Sheppard edging ahead at the checkered flag.

“They (lapped traffic) were in the bottom and the top and those were the preferred lines,” Sheppard said. “But I was able to keep up just enough where if they were to mess up I could slip through the middle of them. It was definitely tricky out there. I was trying to be patient somewhat and try to make sure I made the right decision through lapped traffic. But obviously when you’ve got them guys behind you, there’s a lot of tough competition out here, and they’re just back there waiting for me to make a wrong move.”

As the frontrunners worked their way through late-race lapped traffic, Moran began reeling in the race leader, only to have his efforts thwarted by a caution with two laps remaining in the distance. But a surge of momentum from the lap-48 restart provided Moran one final challenge for the lead.

“I think we were just the second-best car tonight,” Moran said after the race. “I haven’t been here since ’15 and I think it’s got more banking and I think it helped the racing. You could move up the track a little bit. We weren’t so married around that bottom. But that bottom was still good enough where you could squirt off of it and that’s what we did right there at the end, tried to get that run. But it just wasn’t quite enough. We were good, just not good enough.”

With his crew making adjustments to his car after Saturday’s prelims, Davenport was able to advance from his inside fourth-row starting spot to round out the podium in the 50-lapper, clicking off another solid points night to maintain the top spot in the Lucas Oil standings.

“I wish I would have gotten by Tyler (Erb) a little earlier,” Davenport said. “We was really good on the bottom early before it got real rough. But we couldn’t get through the holes like we needed to. We need to change a few things there. But we’re trying a few new things on the car. We’re just going for W’s this year. So we completely changed it after qualifying there and didn’t really go too good in the heat race. But we got better in the feature.”

Notes: Sheppard scored his 12th career Lucas Oil Series victory. … The race was slowed by three cautions. … The first yellow flag waved on lap 21 for debris on the racetrack. … Jason Jameson spun in turns one and two to draw a caution on lap 33. … The final yellow flag flew on lap 48 when Darrell Lanigan spun in the the top of turns one and two. … After running as high as fifth, Jimmy Owens retired early on lap 28. Bobby Pierce also retired early after nearly rolling his No 32 machine. … Among drivers making their first-ever appearance at Brownstown were Ryan King, Stormy Scott, Matt Cosner and Shanon Buckingham. ... Notably absent from the pit area was Gregg Satterlee, who has followed the Lucas Oil tour for the last two seasons. ... Justin Rattliff climbed back behind the wheel after stepping out of the driver's seat in 2018. ... Scott Bloomquist's team told DirtonDirt.com Thursday afternoon that he would be sidelined indefinitely after sustaining leg and hip injuries in a motorcycle accident. ... Missouri driver Austin Rettig is also out of action after undergoing intestinal surgery earlier in the week.