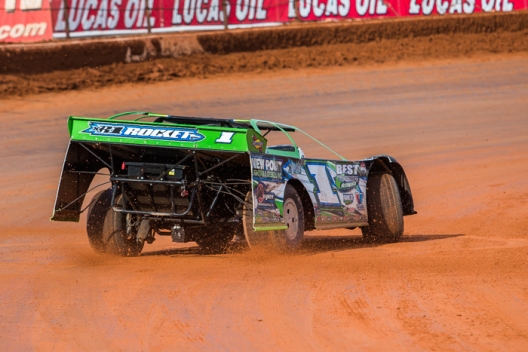 The 22-year-old Erb took the lead on a lap-13 restart and led the rest of the 50-lapper to capture his first start for the St. Marys, Ohio-based team fielded by Eric Brock and wrenched by Randall Edwards.

“I’m thrilled. Eric Brock, Kelly (Brock), (crew chief) Randall (Edwards), they believed in me to take Josh’s spot here,” said Erb, who replaced former series champion Josh Richards. “He did a heckuva job when he was in this thing. I don’t know, it was just the right time I guess. I talked to them three years ago about driving this thing and it didn’t work out. But it’s an awesome way to start.”

A series of cautions kept competitors close to Erb through the first half of the race, but he stretched his lead to a straightaway with 10 laps remaining before runner-up Earl Pearson Jr. of Jacksonville, Fla., cut into the margin late, ending up 0.961 seconds behind at the checkers.

The third-starting Pearson took second from seventh-starting Jonathan Davenport of Blairsville, Ga., on lap 43, leaving the reigning series champ to settle for third in the race originally scheduled for Friday evening. Outside front-row starter Josh Richards of Shinnston, W.Va., and Brandon Sheppard of New Berlin, Ill., rounded out the top five.

O’Neal, who led the first 12 laps, got into the turn-one wall while running second on the 27th lap and retired with right-front suspension damage.

The feature was slowed seven times, the most serious for Brian Shirley’s barrel-rolling accident into turn three after a lap-20 restart. The Chatham, Ill., driver was shaken up but didn’t suffer any apparent injuries, walking to the ambulance unattended after climbing from his Bob Cullen-owned car under red-flag conditions.

Erb, a former World of Outlaws Morton Buildings Late Model Series competitor who shifts to the Lucas Oil Series with his move to the Best team, thanked all his crew in victory lane.

“This is an awesome team we’ve got here,” Erb said. “They gave me an awesome race car and it’s been fast the whole time we’ve been here. Man, I’m excited, I want to keep racing all week. This is probably the best way we can start and it’s just an awesome night.”

Erb finished third driving his own car in last year’s Super Bowl finale, briefly edging ahead of Richards in the final laps.

“The first time I came here, I was terrible, and the Friday night last year I wasn’t very good,” Erb said. “Saturday we just kind of picked up on something, really, just making laps here, coming and testing here, just to give ourselves the best chance for this race when it comes time for this race at the beginning of the year. I’m definitely a fan of it now.”

Pearson, who started third and held the second spot twice — laps 18-19 and 28-29 — before slipping back, got rolling late to overtake Davenport, but he couldn’t seriously challenge Erb.

“It was a good run for us. On those restarts we got shuffled back there once or twice, but for a daytime show, it was pretty interesting for the fans I’m sure,” Pearson said. “Randall (Edwards) and the (Best) guys, they do an excellent job. I don’t know how many races that car’s won at this racetrack, but it’s a bunch.

“We could clean the top off and it got better. On those restarts it was awful dirty (on the high side) up there, but we kind of set up since we’ve been here to run the top. I can’t get around the bottom like I want to here right now.”

Davenport, who slipped back to ninth on the 15th lap, had his share of troubles before his fifth-to-third move on lap 28.

“Me and Scott (Bloomquist) got hung together — I hung his right-rear quarterpanel on my left-front flopper — and then I got behind Sheppard one time and took the air off my nose, and I didn’t know (Owens) was on the outside of me. I hope his car’s OK,” Davenport said.

“I think it turned out pretty good," he continued. "I just wish I’d have never given up on the top. I was afraid I was going to hurt my tire too much, and I was afraid I (began charging) a little too early. But sometimes you’ve just gotta pick your battles when you can.

"Hat’s off to my crew, they did an excellent job. We changed quite a few things from what I normally run here (with suspension setup), and I’m going to go back a little bit. I think we went a little too far. We had to let the racetrack come to us."

Devin Moran, who was running ninth when he got into the wall between turns three and four on the sixth lap, drew the first yellow with the second appearing on the 12th lap when Stormy Scott blew a left-rear tire.

A lap-17 yellow appeared when Shanon Buckingham got into the turn-four wall and collected Scott.

Tim McCreadie spun in turn four for a lap-19 yellow and sixth-running Jimmy Owens went around in turn three on the 20th lap after getting squeezed by Davenport.

Drivers will go right back to work Saturday evening with the regularly scheduled finale of the Super Bowl of Racing with hot laps set for 5 p.m. Time trials, heat races and consolation races will precede the $12,000-to-win main event.

Notes: The Best Performance Motorsports team has won four of the last five Lucas Oil events at Golden Isles (the previous three with Josh Richards behind the wheel). ... Chris Ferguson, who had engine problems in his own car in Friday’s heat race, took six laps in Scott Bloomquist’s backup car in the feature to get start money. … A faulty battery during his heat race forced Don O’Neal to use a consolation race to transfer to the main event; he was running second in his heat when he dropped to the infield in Friday’s prelims. … Jeff Mathews was holding a transfer spot in the second consolation when contact from Steven Roberts sent him around in turn one on a restart, knocking both from contention. ... The feature wrapped up about 3:40 p.m.; it was originally scheduled for Friday evening but postponed when rain became too heavy during consolation races.

The conclusion of Friday's event has been reset for 1:30 p.m. and race cars were called to the track to help pack the track. Track workers began rolling around the racing surface about 11:15 a.m. for a start about 90 minutes later than originally scheduled.

Friday evening rain that halted action during consolation races forced the postponment of the Lucas Oil Late Model Dirt Series opener in the first round of the RhinoAg Super Bowl of Racing.

The makeup program will tentatively resume with the second consolation at noon Saturday following by a 50-lap feature paying $12,000-to-win. Gates will open at 11 a.m. Fast qualifier Hudson O’Neal of Martinsville, Ind., is scheduled to start on the pole position.

Fans without a Friday or two-day armband can purchase a $10 armband to watch Friday’s makeup event; Friday’s lower divisions won’t makeup the remainder of their program but will compete in Saturday evening’s event running for their full weekend purse (with 10 extra laps for the enduro and local Late Model feature).

Polesitter Tyler Erb raced to a 10-lap victory over fellow transferrees Chris Ferguson, Kyle Bronson and Scott Bloomquist, who got the final spot when Steven Roberts got into the turn-two wall on the final lap. Erb and Ferguson pulled far away from the field in a race slowed by a first-lap scramble. Bloomquist, who started outside the front row, saw his hopes dim on the initial start when he got into the turn-one wall while battling Erb. The scramble sent Ray Cook and Blake Spencer to the pits (Joel Callahan sustained right-side damage but finished the prelim).

In a race slowed by four yellow flags, Josh Richards outdueled Clint Bowyer Racing teammate Don O'Neal (who retired during a lap-seven caution with a faulty battery) and captured the third heat. Polesitter Brian Shirley dueled Richards early, lost a spot to O'Neal on a restart and then dropped to fourth when Devin Moran stole the position with an early turn-four slide job. Shirley pressured Moran the rest of the way but settled for third with Devin Gilpin getting the final transfer spot. O'Neal was set to restart second after three lap-seven yellows, but pulled to the infield before the race returned to green. The most serious caution appeared when Brian Connor's car bounded into the air and nearly climbed completely over the turn-one wall on a lap-seven restart, his car coming to a rest with the rear wheels on the track. The other cautions: Mark Whitener got into the turn-one fence on the first lap; Blair Nothdurft spun on lap seven; then Shanon Buckingham and Nothdurft spun on the ensuing restart.

Earl Pearson Jr. outdueled front-row starter Jimmy Owens at the outset and raced to victory in the second heat. Pearson also turned back Jonathan Davenport's slide job on an early restart and went on to win over Davenport, Owens and final transferree Chase Junghans. Ivedent Lloyd Jr., pulled to the infield with right-front suspension problems on the first lap, drawing a yellow.

Fast qualifier Hudson O'Neal turned multiple challenges from Brandon Sheppard and captured the first 10-lap heat. The two transferred to the main event along with Brandon Overton and Tim McCreadie. Jason Jameson, who started on the tail after getting into the wall in time trials, rallied to finish fifth as rain began spitting at the 4/10-mile oval.

Fast qualifier Hudson O’Neal’s 18.864-second lap lowered the record for the track’s 4/10-mile configuration; Ronny Lee Hollingsworth held the previous track record (15.049 seconds) set in 2009. … The series is in hurry-up mode with rain approaching from the west. ... Josh Richards of Shinnston, W.Va., has won five of the previous seven Lucas Oil events at Golden Isles. … Texan Morgan Bagley planned on entering the event, but generator problems on the team’s hauler forced them to head to Ocala, Fla., for repairs. … Jason Jameson didn't get a qualifying time after slapping the wall. ... Ivedent Lloyd Jr. of Ocala, Fla., is competing in the Big Frog Motorsports entry.

The RhinoAg Super Bowl of Racing kicks off the season on the Lucas Oil Late Model Dirt Series with a $12,000-to-win, $1,000-to-start purse on the line as Jonathan Davenport of Blairsville, Ga., begins the defense of his 2018 championship.

Tim McCreadie of Watertown, N.Y., and Hudson O’Neal of Martinsville, Ind., are among other series returnees while newcomers include Devin Moran of Dresden, Ohio, and Tyler Erb of New Waverly, Texas, who replaced Richards in the Best Performance Motorsports ride.

Entries will be split in half for time trials followed by four heat races (four transfer apiece), two consolation races (three transfer apiece) and the 50-lap main event at the 4/10-mile oval where Richards swept both 2018 Georgia-Florida Speedweeks events.