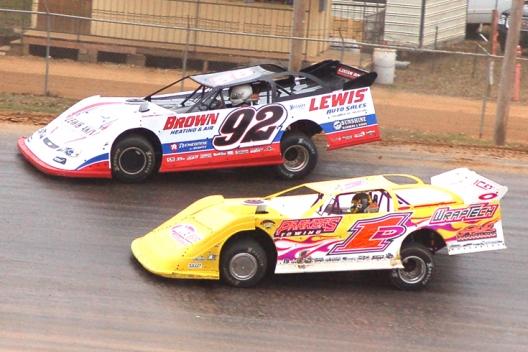 PHENIX CITY, Ala. — Polesitter Joseph Brown of Columbus, Ga., rallied back around fellow Columbus native Dalton Cook on lap five and then led the final 35 laps to win Sunday’s National Late Model Super Car Series main event at East Alabama Motor Speedway. Cook grabbed the lead on the start and paced a handful of early laps, but Brown used highside momentum to grab the lead as they raced off of turn two.

Brown then had to survive a rash of late cations to pick up the $3,000 victory. Cook finished 2.120 seconds back, while Kenny Collins of Colbert, Ga., finished third. Mark Whitener of Middleburg, Fla., finished fourth after pitting with a flat tire with nine laps remaining, while Taylor Puckett completed the top five.

Notes: Cook said he was happy to run second after a plug wire fell off midway through the race. … Mark Whitener slowed with a flat to bring out a caution with nine laps remaining. He rallied to finish fourth. … A caution waved on lap 38 for a slowing Dana Eiland. He pitted and returned to finish sixth. … Debris in turn one forced a caution with one lap remaining. … Nine of the 16 starters finished the race, all on the lead lap. … Jake Traylor gave up a top-five spot when he pitted with two laps remaining. Traylor was already slowing in turn two when he and Whitener made contact. … Oliver Gentry scratched from the main event.