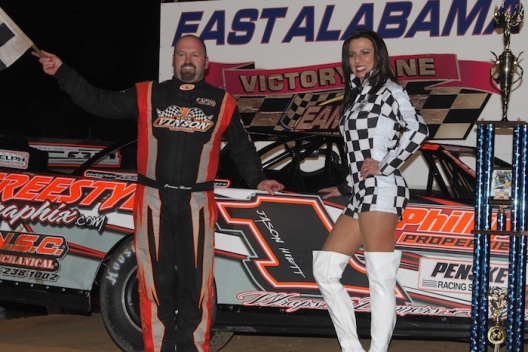 PHENIX CITY, Ala. — Everything leading up to Sunday’s 44th annual National 100 at East Alabama Motor Speedway is of little consequence to Jason Hiett. Hiett wasn’t overly concerned that the race was nearly two months removed from its traditional November date. The Oxford, Ala., native didn’t care about the car count either. Nor was Hiett bothered that the race was trimmed to just 50 laps.

Jason Hiett is now a National 100 winner, even though his first victory in Alabama’s most prestigious dirt Late Model event will likely have an asterisk beside it, understandable considering the 2018 race was actually held in 2019, the laps were only half what makes the traditional century grind just that, a century grind, and the purse was a mere $6,000-to-win rather than the $25,000-to-win advertised back in November.

None of that mattered to Hiett after he turned back charges from Tanner English of Benton, Ky., and Michael Page of Douglasville, Ga., to win Sunday evening at EAMS.

“Any time you can get this race, whether there’s five cars there or not, it kinda marks you in the history books,” Hiett said. “It’s a big deal to us … plus just getting a quick start to the new season with a new car. It definitely helps our confidence out.”

Hiett, the polesitter, took the lead from fellow front row starter J.R. Moseley on the fourth lap and led the rest of the way, finishing 0.546 seconds ahead of English, who started third. Page rallied to complete the podium after starting seventh, while Joseph Brown of nearby Columbus, Ga., improved two positions to finish fourth. Fourth-starting Kenny Collins of Colbert, Ga., slipped back one spot and completed the top five.

Hiett briefly slipped back to third on the initial start, before rebounding to reclaim the lead from Moseley, who paced the first three circuits.

“We ran the state race here in kinda the same track conditions and it’s really treacherous on them starts because I think the other divisions kinda chalk the track up,” Hiett said. “So yeah I just didn’t get a good start that first start so luckily we got a caution and I kinda got my adrenaline going a little bit better and we were more on our toes that second start.

"The rubber started coming back in (turns) three and four and I could get a run on (Moseley) and he was kinda high there. I caught a good run on him and I actually think he nipped the wall there going down the frontstretch and we were able to get ahead of him.”

Once out front, Hiett had to negotiate five restarts, as cautions waved on laps five, 15, 26, 30 and 47. The third was for Moseley, who slowed just past the halfway mark before ducking into the pit area for a tire change. By then, Moseley had slid nearly out of the top 10, while English was comfortably in second, about a half-second back.

“I wasn’t really concerned about tires because it was chalky in (turns) one and two and the rubber hadn’t really got there,” Hiett said. “I probably should have paced myself a little bit more. We kinda started losing the tire there with seven or eight (laps) to go and I knew I was gonna be in trouble if we didn’t get a caution or something.”

English knew that his bid for a victory in his first start with Crossville, Tenn.-based Stone-Weaver Racing all but disappeared with the fifth yellow flag.

“When the caution come out, that killed me right there,” said English. “We had a roll going and had him on the outside there and that hit it just right. The car was good, but we could’ve done a few things better. It’s the first time out … I’m really pleased for sure.”

Notes: Ten drivers completed all 50 laps. … Hiett is the 26th different National 100 winner in 44 events. There were no previous National 100 winners in Sunday’s field. … His best finish in four previous starts was fifth in 2015. Other finishes include seventh (2012), 14th (2013) and 11th (2016). … The worst of the five cautions came on lap 30 when 14th-running Jim Rogers of Statesboro, Ga., flipped wildly in turns one and two after making contact with Russell Flynn of Pensacola, Fla. Rogers was apparently uninjured in the incident. … Jimmy Thomas was a late additon to the starting field. He finished 19th. ... Forrest Trent and Patrick Michel scratched from the feature. ... Chuck Hummer if Lyon, Ohio, made only two laps before retiring with a broken J-bar. ... Hiett said preparing of a 50-lap race is far different than a 100-lap race. “Usually in a 100-lapper you’ve got people changing tires and going back and forth,” he said. “You know with a 50-lapper you just can’t afford to change a tire come back to the front. We were pretty much on what everybody else was on, just because of the other classes we’d watched. We kinda knew what we needed to be on.” … Scott Bloomquist of Mooreburg, Tenn., leads all drivers with a record eight National 100 victories, but none since 2003.

Tanner English of Benton, Ky., is among 12 drivers making their first-ever National 100 start. He was just a blink of an eye away from sitting on the pole, but will instead start third behind polesitter Jason Hiett of Oxford, Ala. “The track’s totally different than anything I’ve ever been on,” said English. “Just the rubber and how you drive it, letting off (the throttle) early and stuff like that. It’s a little different. But I like it. It’s a good track for sure. Jason (Hiett) had a little bit different tire on, so we were the fastest on the same tires. He went soft on the right rear. It burnt it off, but it worked for a lap. Maybe we should have done that.” … While only eight of the 20 drivers have started a National 100, six of the eight were in the 2017 field: Dalton Cook (21st), Patrick Michel (19th), Michael Page (17th), Kenny Collins (15th), Mark Whitener (14th) and Dana Eiland (10th). … Eiland started the 2017 race in his Crate Late Model after a number of drivers left following a lengthy rain delay. … Hiett’s last National 100 start was in 2016. He finished 11th. … Rodney Martin, who will tag the rear of the field, will make his first National 100 start since 2006, when he finished 23rd. … Cook, Eiland, Mark Whitener and David Whitener are among the drivers who are slate to start Sunday’s feature in cars they’ll be utilizing in other divisions. Mark Whitener will pilot his National Late Model Super Car Series machine, while his brother David will pilot the Crate Late Model that Mark is driving Sunday. “They just didn't have enough cars,” said Mark Whitener. “(Track owner) Billy (Thomas) deserves to have cars here. He deserves to have a enough cars, so I entered both of my cars in the race to try to help, you know, help with the purse or, or whatever the case is.”

Going out third in the first group, Jason Hiett of Oxford, Ala., turned a quick lap of 14.243 seconds to set the overall fast time and earn the pole position for Sunday’s 44th annual National 100. Hiett knocked Tanner English of Benton, Ky., from the top spot. English, making his debut in the Stone-Weaver Racing No. 116, was the second driver to take the track during time trials. His mark of 14.530 seconds was fast enough to earn the second spot in the first group, giving English the third starting position for Sunday’s 50-lap main event.

J.R. Moseley of Columbus, Ga., was the last driver among 18 qualifiers to make a qualifying lap, but he was the fastest in the second group as his mark of 14.856 seconds earned him the outside front row starting position for the feature. Kenny Collins of Colbert, Ga., stopped the clock at 14.886 seconds in the second session and will start alongside English on the second row.

Nineteen drivers are slated to start the main event. They’ll line up straight from Saturday’s qualifying sessions, with the first group occupying the inside row with the second group on the outside. Only one driver, Patrick Michel of Belle Chasse, La., failed to make a qualifying lap. Michel will start 19th on Sunday.