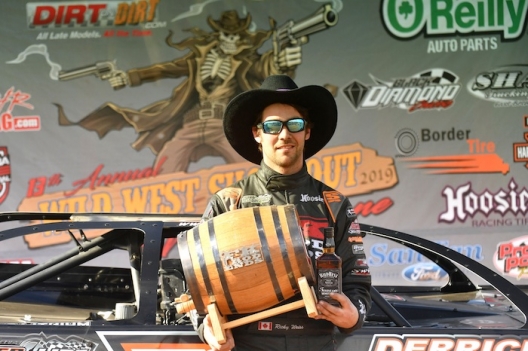 Weiss took advantage when polesitter Brandon Sheppard of New Berlin, Ill., got into turn one too high on the eighth lap, slipping underneath and edging into the lead on the backstretch en route to his third career miniseries victory.

“(It’s good) just to know that you’ve got a good car, got a good piece,” said the third-starting Weiss, who won two miniseries races last season but hadn’t cracked the top-five in the first three races. “We knew that coming here. This is a brand new car, second night on it. (Crew chief) Shawn (Gage)  built this thing. Hats off to all the guys, just everybody helping me. … Hopefully we can make it 2-for-2 today.”

Pierce, the Oakwood, Ill., driver whose three 2019 miniseries victories already paid him $10,000 from the Keyser Quarter-Million Challenge, was up to second after the first lap, but ended up settling for a fifth place finish behind Weiss, Sheppard, Chris Simpson of Oxford, Iowa, and Chase Junghans of Manhattan, Kan.

While the $250,000 for a six-race sweep is off the table for Pierce, the 22-year-old still has the opportunity to earn a $100,000 bonus for five victories or $25,000 for four victories. Racing continues with the $5,000-to-win nightcap of Saturday’s doubleheader and the miniseries concludes Sunday with a $14,000-to-win finale for Super Late Models.

Weiss, who took the checkers 0.749 seconds ahead of Sheppard on a daytime track where passing was at a premium, was glad to get back on track in the desert.

“It was a good race. Lapped traffic was getting a little hectic there but I could see Shawn, he was giving me good signals. Then the caution come out and I knew at that point as long as I could keep the tires under me we would be alright.”

Sheppard knew he was in trouble when he left Weiss room inside him on the eighth lap.

“I had a good race car but I just slipped up getting into (turn) one there and gave him just enough room to get under me there,” Sheppard said. “It was kind of hard to judge our there leading where exactly I needed to be in the black because it was kind of still dirty. I just slipped up that one lap and he got by me there. But all in all we had a really good race car and we’ve got one more race today, so we’re going to go back there and get to work.”

Like Weiss, Chris Simpson turned around his week one night after wrecking his Longhorn Chassis against the turn-one wall in hot laps. He unloaded his Black Diamond Race Car and notched his first podium finish in Arizona since the 2018 opener.

“It’s been rough,” the seventh-starting Simpson said. “Last night was a hard hit. I actually got to thank my guys. They worked their butts off last night and this morning to get the car ready. … We’ve got two more left. The other car felt a little better but we’ll just keep working on this one and see if we can get it where we need it.”

Notes: Weiss ended Bobby Pierce’s personal five-race winning streak; Pierce was unbeaten going back to late November’s preliminary for the VP Racing Fuels Gateway Dirt Nationals in St. Louis, Mo. … Heat winner Scott Bloomquist lost ground immediately battling with Kyle Beard, falling from his fourth starting spot to ninth and ending up 13th. … The race’s lone caution appeared on the 19th lap so the ambulance in the infield could attend to a medical emergency in the pit area. ... A blown engine after time trials forced Scott Ward to scratch for the rest of the miniseries.

Moments after driving his race car up and down the highway to confirm fuel pressure issues were fixed, Scott Bloomquist rallied from his sixth starting spot for a heat victory. Bloomquist emerged from a three-wide battle with Brandon Overton and Hudson O'Neal to lead the final seven laps. Overton, O'Neal and polesitter Earl Pearson Jr. also transferred as the next three finishers.

Ricky Weiss led all eight laps to capture the third heat, taking the checkers ahead of Chris Simpson, who went to a backup car after a Friday wreck. Jason Papich and Cody Laney also transferred to the main event.

Kyle Beard led all eight laps to win a heat race for the second straight night. Chase Junghans finished second to transfer along with Mike Maresca and Jimmy Mars.

Brandon Sheppard stole the top spot from polesitter Bobby Pierce exiting turn two on the first lap and led the rest of the eight-lapper. Pierce stayed closed with his fellow Illinois driver but couldn't get by while Cade Dillard finished third, transferring along with fourth-finishing Shaw in the caution-free heat.

The Keyser Manufacturing Wild West Shootout continues with a Saturday doubleheader that opens with an afternoon program that’s a makeup of Jan. 6’s rainout. Bobby Pierce of Oakwood, Ill., is gunning for his fourth straight victory in his quest for the Keyser Quarter-Million Challenge that pays $250,000 for a six-race sweep ($100,000 for five victories, $25,000 for four victories and $10,000 for three victories).

Hot laps are scheduled for 11 a.m. MST with racing starting at noon. While Late Models will run a complete program, USRA modifieds and X-mods will run double features.

The second race of Saturday’s doubleheader is set to begin with 5:30 p.m. hot laps while Sunday’s $14,000-to-win Super Late Model finale wraps up the miniseries with hot laps at 3:30 p.m.