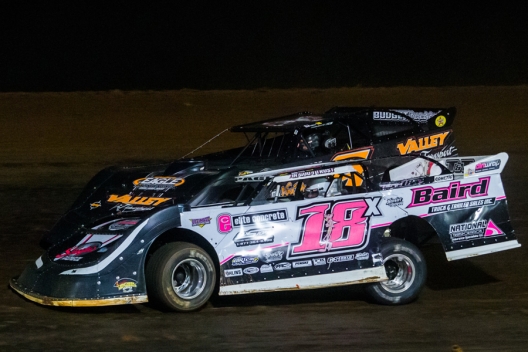 EASTABOGA, Ala. (Jan. 6) — Michael Page knew he had a chance to make history. But he really had to work for it.

With a chance to become the first driver to win the Ice Bowl three consecutive times, Page was close to letting the opportunity slip away. A brake malfunction while leading on lap 26 sent his car zipping up the hill in turn two. By the time he could gather it back in, Cory Hedgecock of Loudon, Tenn., was well out front.

Hedgecock made a final charge as the lead pair raced into turn three on the final circuit, but, unable to grab the lead, he spun out of second place in turn four. Polesitter Ray Cook of Brasstown, N.C., scooted by Hedgecock to grab the runner-up spot, 2.57 seconds behind Page, while early leader Austin Horton of Newnan, Ga., took third. Ninth-starting Dallas Cooper of Talladega finished fourth, while Joseph Brown of Columbus, Ga., finished fifth after starting 10th.

“I really wanted it bad,” said Page. “I’ve been having problems all week with my car. It’s been a handful. It’d kinda come and go. I was having brake problems. I thought I broke something coming out of (turn) two and the car just took off (up the track). I didn’t think it was gonna stop. I was going right to the wall and I finally got it stopped.”

He did get turned left in time, however. And then, despite falling back to third behind Hedgecock and Cook, he turned his focus back to taking the lead. Chasing them through heavy lapped traffic, Page almost saw his night end on lap 30 when he made contact with the lapped car of Dylan Hoover on the frontstretch. Hoover’s car was left crumpled after he shot into the outside wall, while Page managed to soldier on.

“I hate it for the lapped cars,” Page said. “The track got kinda weird there. When you get behind a car, people don’t realize, you don’t see that car in front of them until they open a hole. Then a lot of times it’s too late. You can ride around and run fourth or fifth, but if you’re gonna win a race, you’ve gotta have yourself there to take advantage and do it.”

After the lap-30 caution, Hedgecock pulled away to lead by a full second. But Page quickly reeled him back in. With Page looking to the inside of Hedgecock on lap 35, Hedgecock denied the pass. Five laps later, however, Hedgecock couldn’t hold him off.

Page grabbed the lead and held on over the final 10 laps, despite Hedgecock’s best effort to muscle back in front as they entered turn three, a daring move that left Hedgecock facing the wrong way in turn four, dropping him to a 19th-place finish after leading twice for a race-high 27 laps.

Cook was close enough behind the action that he thought he could be in line for his third career Ice Bowl victory.

“We felt like we had a third-place car tonight and run second,” said the 2009 and 2012 Ice Bowl winner. “There was some good racing there for the lead and it wasn’t one-grooved ‘cause I started on the pole and went to fourth.

“Hat’s off to Michael and the 9 car (Hedgecock) there. They had a really good race. I thought I was gonna win it there the way they was racing. But I just thank the good Lord for a safe race and thank everyone for coming out.”

Horton, who took the lead from Cook on the opening lap and paced two full circuits before giving way to Hedgecock, was satisfied with his podium finish.

“These two guys (Page and Cook), they race a lot and they’ve both won this race,” said Horton. “I’ll take third to start the year off. We just need to go to work; I wasn’t good enough. We’ll try again next year. It ain’t like I ain’t going down swinging. We’re going home and going to work and we’ll come back stronger than ever.”

There are seven drivers in this year’s Ice Bowl starting field who were also in last year’s race. Along with last year’s winner Michael Page, Jason Hiett, Dallas Cooper, Chris Jones, David Brannon, J.T. Seawright and David Seibers are in the show for the second consecutive year. … Overall fast qualifier Seawright of Ft. Payne, Ala., had to hustle to get into the feature after contact on the first lap of his heat knocked him from contention on Saturday. Seawright finished second in his consolation race to advance to the main event. … Seibers, of Chapel Hill, Tenn., starts sixth for the second year in a row. … Consolation race winner Tanner English of Benton, Ky., is driving a second car fielded by Tommy Pope. … Driving again following a year-long hiatus, Corey Posey of Fayetteville, Tenn., finished fourth in his consy to make the feature. Posey also starts on the front row of the Durrence Layne Winter Shootout series feature. … Four former Ice Bowl winners are in field, representing six victories. Page (’17-’18), Ray Cook (’09, ’12) and Brannon (’16) are looking to add to their total, while Page looks to become the first driver with three straight Ice Bowl wins. ... Former winner Tim Roszell (’15) missed the main event by one spot, but was awarded a track provisional.

All but one of Saturday’s heat winners at Talladega Short Track started on the front row of their respective prelim. Michael Page of Douglasville, Ga., grabbed an early lead and paced the first heat flag-to-flag. Page, who is seeking a record third straight Ice Bowl victory, will start fourth on Sunday.

Others winning heats on Saturday included Cory Hedgecock of Loudon, Tenn., Austin Horton of Newnan, Ga., and Ray Cook of Brasstown, N.C. While Page won after starting on the outside front row, both Hedgecock and Horton — who won a lengthy third heat that was slowed by six cautions before a single lap was complete — cruised to heat wins from the pole. Cook, a two-time Ice Bowl winner (2009, ’12), was the only winner who started further back than the front row.

The third-starting Cook took advantage of lap-one contact between polesitter J.T. Seawright — the overall fast qualifier — and Joseph Brown that resulted in Seawright dropping to the rear of the field and led the distance to win the fourth heat. Cook’s victory puts him on the pole for Sunday’s 50-lap, $6,000-to-win main event.

Going out near the tail of the 42-car field, J.T. Seawright of Ft. Payne, Ala., turned the quickest lap during Saturday’s qualifying for the 28th annual Ice Bowl. He’ll start from the pole of the fourth heat. Taking advantage of his draw on a track that was quick early, slowed down noticeably during the middle of qualifying and then picked up a bit of speed toward the end of the session, Seawright turned a fast lap of 14.978 seconds — the only driver to crack the 14-second threshold.

Hometown driver Jimmy Elkins, of Talladega, was the quickest in the first group with a time of 15.230 seconds. Elkins will start from the pole of the first heat. Cory Hedgecock of Loudon, Tenn., was the fastest in the second group, stopping the clock at 15.191 seconds, and Austin Horton of Newnan, Ga. — the second quickest overall — was the fastest qualifier in the third group at 15.041.