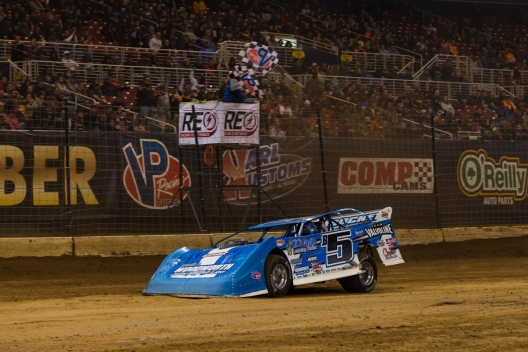 Staring on the pole, Sheppard shot to the front of the field at the drop of the green flag, leading wire-to-wire as he fought back a mid-race charge from Tim McCreadie of Watertown, N.Y. With his victory, Sheppard is one of eight drivers locked in to Saturday’s $3,000-to-win Gateway finale.

“It’s definitely awesome to be locked in and not have to worry about running a B-main,” Sheppard said. “We’ve started on the front row of a B-main the past two years. You’ve got to get a good starting spot up front in the feature. Even though it’s 40 laps, it’s a short 40 laps, as small as the track is. Especially if we go green the whole time. There’s not a lot of room for passing and you’ve got to pass guys when they mess up and there’s a whole lot of tough competition out here. They don’t mess up very often. It’s definitely cool to get the win here.”

As Sheppard entered lapped traffic on lap eight, fourth-starting McCreadie was able to close the gap between himself and the race leader, even pulling alongside Sheppard down the backstretch when a lap-11 yellow flag waved for Billy Moyer Jr. of Batesville, Ark., who brought his heavily damaged car to a stop in turn three. With the caution slowing McCreadie’s momentum, Sheppard went unchallenged the remainder of the distance.

“Lapped traffic was definitely getting treacherous,” Sheppard said. “I didn’t want to push the issue too much. I felt like I could move around wherever I needed to go, so that was the big thing. I think I could have held him off, even if we would have went green. But I don’t know where he’s going or where he’s running, so I think it definitely helped to have that caution.”

While the mid-race caution certainly didn’t help his cause, McCreadie said track conditions — the preliminary was the 31st of the day’s 32 contested races — also factored into his demise.

“It’s pretty rough,” McCreadie said. “Hopefully they can square that away. It just makes it hard to get any type of racing really with side-by-side with guys because you’re trying not to get into people. But with the straightaways being that rough, it’s just hard not to. They knocked the tire in in (turns) one and two and it actually made the racing way better for the 10 laps it was knocked in. It made it way wider to race on. But they pushed it back out and that kind of ended our shot maybe because I couldn’t get through the holes as good as Brandon. But hats off to him.”

Welshan, who’s “Scott Who?” driver introduction sign made for one of the most memorable moments of the 2017 Gateway Dirt Nationals, finds himself locked in to the weekend finale for the second straight year. His success in The Dome isn’t just by chance, he said. His team works hard and he’s feeling more confident now that he has a year of indoor racing behind him.

“It’s just awesome,” Welshan said. “For everybody that thought that last year was a fluke, I hope they know now that our team is capable of running on something like this with the bigger teams. You’re aerodynamic package and all that was just thrown out the window. I think my car was off the ground a whole lot more than it was on the ground out there. It’s nerve-racking. It’s a big stage. I was a lot nervous last year. This year I’m a little bit more calmer and our race car’s good too.”

A yellow flag waved on the opening lap when Robbie Stuart spun in turns one and two, collecting Greg Johnson and others. Scott Bloomquist also suffered heavy damage to his car in the chaos, retiring early to the pit area. Polesitter Freddie Carpenter shot to the front of the field as the race went green, with Clay Fisher and Bryce Davis in a tight battle for the runner-up spot. A yellow flag flew on the fifth lap when Don Hammer spun in the bottom of turn two; fourth-running Johnson was black flagged under the caution for a flat tire. Davis challenged Carpenter as the race went back green, with the frontrunners racing nearly side-by-side for a couple of circuits. Another caution fell on lap eight for a frontstretch pileup involving R.C. Whitwell, Adam Schrag and Blake Martin. A yellow flag waved on lap nine when Martin, Trevor Gundaker and Brian Woodard tangled in turns three and four. Carpenter led the final circuit, with Davis finishing second. Fisher edged ahead of Ruben Mayfield at the line to run third.

Polesitter Jason Welshan shot to the front of the field at the drop of the green flag, as Adam Schrag and Chris Fetter tangled in turns one and two to draw a caution on the first lap. Another yellow flag waved on the ensuing restart when Richard Shepler spun in turn four. Welshan held his lead when the race went back green, with another yellow flag waved on lap two when Mark Shipman and Greg Johnson made contact in turns three and four, sending Shipman spinning. Johnson and Shipman’s battle continued at the rear of the field, with Welshan stretching his lead over Scott Ward. Welshan won the head, with Ward and Chris Fetter grabbing feature transfer spots.

Polesitter Brandon Sheppard shot out to an early lead, with he and second-starting Manny Falcon pulling away from the rest of the field at the halfway point. Fourth-starting Trevor Gundaker attempted to run the top side but was unable to make it stick, eventually falling back to sixth. Never challenged up front, Sheppard led all eight laps, with Falcon finishing runner-up. Rich Bell ran third to transfer to the feature.

A yellow flag waved on the opening lap when Ryan Unzicker nearly got sideways in turns one and two, resulting in a chain reaction that sent Blake Martin spinning. As the race went green, front-row starters Billy Moyer and Austin Rettig raced side-by-side down the backstretch, with the advantage going to Rettig on the first lap. Losing a nose, Donald Johns slowed to draw a caution on lap two. Overtaking Retting on the second circuit, Moyer led the field back to green, as Unzicker challenged Rettig for second. Unchallenged the remainder of the distance, Moyer won the heat, with Rettig finishing runner-up. Unzicker grabbed the third and final transfer spot.

Polesitter Tim McCreadie took an early lead, as Bryce Davis and Rusty Griffaw battled for third. With McCreadie stretching his lead at the halfway mark, Scott Bloomquist began to advance from his final starting spot to run sixth. Pulling away at the checkered flag, McCreadie won the heat, with Rusty Schlenk and Griffaw rounding out the podium to transfer to the feature.

Polesitter Jonathan Davenport shot to the front of the field at the drop of the green flag, with a yellow flag waving on the first lap when Dewayne Kiefer came to a stop in turns one and two, collecting Brandon Hood, who was towed off the track. Davenport began pulling away on the restart, as Gordy Gundaker and Levi Ashby raced side-by-side for second. Kiefer slowed in turns one and two to draw another caution on the second circuit, retiring to the infield. In a tight battle for second, Ashby spun to draw a caution on the ensuing restart, eventually retiring early. Unchallenged up front, Davenport led the remaining circuits to win the heat, with Gundaker finishing second. Oakley Johns grabbed the third and final transfer spot.

A yellow flag waved on the opening lap when Brad Simpson spun into the infield. Edging ahead of fellow front-row starter Billy Moyer Jr. when the race went green, polesitter Tanner English took an early lead. Third-starting Freddie Carpenter nearly got sideways in turns one and two on the green flag lap, with Simpson slowing to draw another caution with just one lap complete. Amber Crouch and Don Hammer tangled in turn three on the ensuing restart, collecting Hunter Rasdon; all cars were able to continue. Another yellow flag waved on lap two when Crouch and Rasdon tangled in the bottom of turns one and two. English maintained his lead as the race went to a single-file restart, with second-running Moyer Jr. attempting to real in the race leader at the halfway mark. English won the heat, with Moyer Jr. and Joey Coulter rounding out the podium.

Twelve Dirt Late Model heats — six for each qualifying group — kick off Friday’s jam-packed VP Racing Fuels Gateway Dirt Nationals program at 3 p.m. A total of 32 races are scheduled between the Late Models, midgets and open-wheel modifieds; the action is set to climax this evening with the twin 20-lap Late Model preliminary features paying $5,000 to win. … Hot laps are not being held for any of the three divisions, though the midgets did hit the track shortly after 2 p.m. for slow circuits to get heat in motors. … Scott Bloomquist of Mooresburg, Tenn., is hopeful that he’s solved the fuel-system problems that prevented him from logging a qualifying lap and forced him out of the 20-lap Race of Champions. … Tyler Carpenter of Parkersburg, W.Va., who finished second in last year’s Gateway finale, secured a pole position starting spot for his heat in Thursday’s time trials but nevertheless had some work to do on his car after the qualifying session. He clipped an inside tire with the left front of his car on his second lap, bending his nosepiece and causing him to slide into the outside wall with his machine’s right-rear corner. “We tore it all up,” Carpenter said of his bodywork, “but luckily it was all cosmetic.” … Logan Roberson of Waynesboro, Va., wore a big smile as he rode a scooter around the pit area on Friday afternoon after landing a heat-race pole start in what is his Super Late Model debut. The 21-year-old Crate Late Model standout is driving his father Greg’s Mike and Michelle Smiley-owned No. 19 after his own machine, which he planned to bring to St. Louis, was sidelined after engine problems in practice curtailed his expected first Super Late Model appearance the previous weekend at 411 Motor Speedway in Seymour, Tenn. … Tim McCreadie of Watertown, N.Y., was featured on a segment of St. Louis’s Fox2 News morning show on Friday. Standing in front of the midget he’s driving this weekend, he spoke to a reporter about the Gateway Dirt Nationals and his own racing career, providing some superb local publicity for the event.