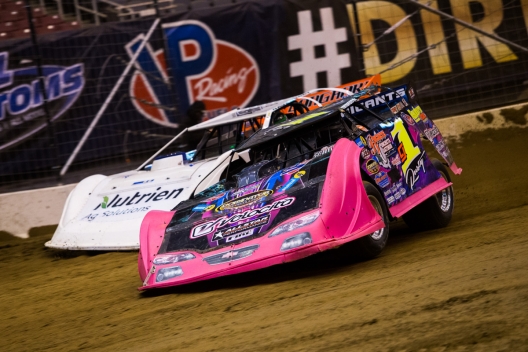 ST. LOUIS, Mo — Leaving the VP Racing Fuels Gateway Dirt Nationals last year, Rusty Schlenk felt like he’d missed a chance at perhaps a career-high payday and an opportunity to shine on one of the sport’s grandest stages: victory lane inside The Dome at America’s Center. Schlenk was leading a preliminary feature when a scrape with the wall and subsequent flat tire knocked him from the lead.

Along with seeing a $5,000 paycheck disappear, Schlenk also felt as though he’d severely hampered his chances at winning the $30,000 finale on Saturday. Perhaps now Schlenk can put the dreaded memory of last year’s Gateway Dirt Nationals behind him. The driver from McClure, Ohio, got a measure of redemption on Thursday as he led the 20-lap Race of Champions flag-to-flag.

He earned $5,000 in finishing 0.959 seconds ahead of Jonathan Davenport of Blairsville, Ga. Dennis Erb Jr. of Carpentersville, Ill., rallied from ninth to finish third, while Jason Feger of Bloomington, Ill., and Brandon Sheppard of New Berlin, Ill., completed the top five in a 13-car invitation-only field made up of drivers including past Gateway Dirt Nationals winners, crown jewel winners and series champions.

For Schlenk, the win simply couldn’t come fast enough. Some 349 days after his fateful miscue, Schlenk admitted he’s thought about it “every night all the way up ’til today.”

“That’s just one of them races that you can’t get back,” said Schlenk as he took a break inside his hauler, away from the crowd a well-wishers gathered to offer their congratulations. “You never know if you’re gonna be in that position again. When you’re running with this caliber of cars, you never know when you will have another chance to be on that stage at a race like this. To give that away as a driver … if you have it taken from you it’s one thing … but when you make a mistake in the seat and cost yourself a $5,000-to-win (race) and potentially a $30,000-to-win race, that’s huge. It eats on you everyday.

“As drivers we hate losing. And when we do lose and it’s our fault, we criticize ourselves done to the last bit of energy we have just to make sure you don’t do that again. That’s the hardest part. You never know when you are gonna get that opportunity. You get that shot once a year. It’s like the World 100 or the Dream. It’d be like leading one of those things. I know it was only a $5,000-to-win race, but who cares. You’ve got the same caliber of driver behind you that’s at the World 100 or whatever it may be.

“As a driver, to beat those guys, it’s huge. When you have them beat and you give it away, that’s the stuff that gives us nightmares for a whole year until we get a shot to prove ourselves. And a lot of us, sometimes we don’t get a (second) shot to prove ourselves. That’s kinda where I was. I might never be that fast here again. I might come back every year and be a fifth-place car.”

The three-time DIRTcar weekly champion was anything but a fifth-place car in Thursday’s 20-lapper. The starting lineup for the race that opened competition inside the Dome for the third annual Gateway Dirt Nationals was set by random pill draw. Schlenk drew the pole position, while Davenport started alongside on the front row. Schlenk bolted ahead of Davenport at the start and slowly inched away. The race was slowed by three cautions, one for a spin before a lap was complete, and two more that allowed the second-running Davenport to pull directly to Schlenk’s rear deck.

“After that first caution I was a little nervous,” said Schlenk “I looked up at the jumbotron on that first run and I seen I was pulling away from him. But it’s J.D., you know what I mean? He’s gonna figure it out eventually. So I figured, man, once that bunched us back up, he’s on my butt. If I mess up one time, he’s gonna have that advantage and that’s all it would take to get underneath me. But after that first restart, I watched myself driving away on the big screen and I knew as long as I hit my marks, that he wasn’t good enough to do anything with me and everybody else was fighting for position.”

Schlenk wasn’t the only one watching the action on the huge monitors located at each end of the track. Though Davenport gave chase, he still had time to glance up at the screen.

“I was trying to watch the race on the jumbotron up there ‘cause there wasn’t much happening from where I was,” said the Lucas Oil Dirt Late Model champion. “And I wasn’t going to push the issue, even if I was faster than Schlenk. He had a really good car. Congratulations to him.

"We could keep pace there at the very end. It was so rough there in (turns) one and two I seen a couple guys have problems. I think (Tim) McCreadie broke a driveshaft and things like that. I was just trying to keep everything together the first night. We didn’t hit a yuke tire, so we didn’t tear the nose up. I didn’t hit the outside wall, so I didn’t knock the deck out and we got some pretty good notes to go off of for tomorrow.”

Erb felt like he was able to take a few notes as well. After starting ninth, he clung to bottom to improve six spots all while trying to get a feel for a relatively new car.

“It was hard to pass. You had to (wait) until somebody slipped up and get up underneath them,” said Erb. “We got a couple on the restarts … so, I mean it’s tight out there to pass right now. We could at least maneuver and get up through there. I think we are a little bit better this year.

"The race track’s a little different. It has a little more moisture in it this year. So we’ll just have to see what tomorrow brings. We’re still trying to build our notebook here on this (Rocket) XR1 car. It’s the first time having it on a little tight track like this, so we just threw something at it here tonight and it was pretty good. I think we’ve got something we can kinda tune on for (Friday).”

Notes: World 100 winner Tim McCreadie of Watertown, N.Y., was making a charge on the high side when he lost a driveshaft from his No. 39 on lap six, bringing out the second caution. … Inaugural Gateway Dirt Nationals winner Scott Bloomquist of Mooresburg, Tenn., was running in the top three on a lap-six restart when his No. 0 slowed. Bloomquist pulled up the track out of the way before darting into the infield. … The race was slowed by three cautions, one of the initial start for a spin in turn one, another on lap six for McCreadie, and the third for Billy Moyer who looped his car in turn one. … Moyer spun in turn one to avoid the cars of Shannon Babb and Jeremiah Hurst, who got together in the corner, but continued on their way. … Shannon Babb of Moweaqua, Ill., the winner of last year's inaugural Race of Champions, finished sixth.