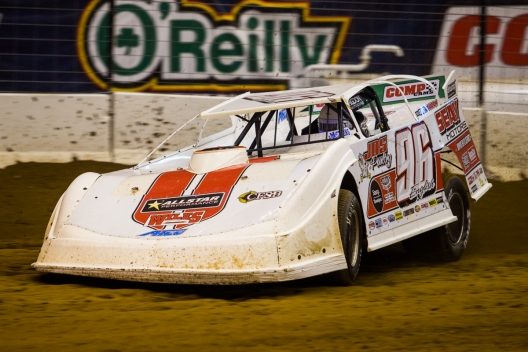 Heath Lawson/heathlawsonphotos.com
Tanner English on his way to setting fast time in Thursday's Gateway Dirt Nationals qualifying session.
Key notes: Watch all the action live via pay-per-view at DirtonDirt.com. ... The third annual Gateway Dirt Nationals gets under way on Thursday with Late Model time trials and the $5,000-to-win Race of Champions. ... The Late Model field is split into two preliminary programs for Thursday's time trials; Groups A and B will run separate Friday programs of heats, consolations and 20-lap features. ... The top four finishers from each of Friday's $5,000-to-win Late Model preliminary features are locked into the first four rows of Saturday's $30,000-to-win event. ... Previous Gateway Dirt Nationals finale winners include Scott Bloomquist (2016) and Bobby Pierce (2017). ... Modifieds will also be in action, with midgets added to the program this year.
Car count: 93
Fast qualifier: Tanner English
Time: 11.119 seconds
Editor's note: Results and race details are unofficial.
By Alli Collis, Kevin Kovac and Robert Holman
DirtonDirt.com staff

Tanner English of Benton, Ky., was the overall fastest qualifier on Thursday, turning a lap of 11.119 seconds during the first time-trial group. The performance earned him a pole position starting spot for the first of Friday’s preliminary program heat races.

Defending Gateway Dirt Nationals champion Bobby Pierce of Oakwood, Ill., was quickest in the second qualifying group with a circuit of 11.276 seconds, giving him a heat-race pole start on Friday as well.

Drivers experiencing problems during time trials included 2016 Gateway Dirt Nationals winner Scott Bloomquist of Mooresburg, Tenn., who turned the slowest lap in the first group due to a fuel pressure problem apparently caused by a fitting in his car’s fuel line, and Randy Timms of Wheatland, Okla., who failed to log a qualifying lap due to a broken driveshaft.

Three Dirt Late Model standouts — defending Gateway Dirt Nationals winner Bobby Pierce of Oakwood, Ill., Tim McCreadie of Watertown, N.Y., and Brian Shirley of Chatham, Ill. — are driving midgets this weekend. Pierce is actually pulling triple-duty with an open-wheel modified ride as well while McCreadie is also entered in his Sweeteners Plus-backed Longhorn house car; Shirley is solely competing in the midget class, running a Neuman Racing mount as a teammate to McCreadie. … Tanner English of Benton, Ky., who was a contender for victory in last year’s finale at the Dome, is making a final ’18 start in his family-owned No. 96 before shifting his focus to his new position as the hired gun for the Stone-Weaver No. 116 team. … Joey Coulter, who earlier this week announced that he is reducing his racing schedule in 2019 because he’s relocating to Texas with his wife’s job transfer and will have Brandon Overton of Evans, Ga., take the full-time reins of his Rum Runner Racing No. 2, is taking a break from his move to the Lone Star State to compete in the Dome. … Jason Welshan of Maryville, Tenn., the fourth-place finisher in last year’s 40-lap Gateway headliner, is back at the Dome but not behind the wheel of the same car he drove in 2017. He’s now running a Savage Chassis that he’s trying to develop for sale to the public. … Zack Dohm of Cross Lanes, W.Va., is making Dome debut driving his father Tim’s No. 6T because his own machine is being rebuilt following a flip earlier this month during the World Finals at The Dirt Track at Charlotte in Concord, N.C. Tim ran the Gateway Dirt Nationals in 2017 so he decided to give his son the opportunity this year. … R.C. Whitwell of Tucson, Ariz., is making his first Dirt Late Model start since Arizona’s Wild West Shootout in January in a former Earl Pearson Jr.-driven Black Diamond Race Car fielded by his open-wheel modified team owner Jessie Hoskins of Lonsdale, Okla. … Dan Jacober of Highland, Ill., has his car adorned with a wrap featuring professional wrestler Hulk Hogan with the slogan “Hulkamania is running wild brother!” splashed across its hood. … Fairbury (Ill.) American Legion Speedway sportsman division racer Amber Crouch of Cullom, Ill., is making her Super Late Model debut driving Ohio standout Rusty Schlenk’s Rayburn No. 91. Schlenk, meanwhile, is driving his familiar No. CJ1 Rayburn house car as he attempts to duplicate the speed that made him a strong contender in last year’s Dome event.

A field of 93 Dirt Late Models are signed in for the third annual VP Racing Fuels Gateway Dirt Nationals. That number is down one from 2017’s turnout and four from the ’16 inaugural. … Event promoter Cody Sommer told competitors during Thursday’s drivers’ meeting that he senses a renewed buzz in the air for the third installment of the weekend with the addition of the midget division, which he said has produced “a lot of new faces in the building” with the class drawing 54 invited entries. … With the invitation-only open-wheel modified division also pulling 54 cars, a total of 201 machines are parked inside the convention center pit area adjoining the Dome. … The fifth-mile dirt oval constructed on the Dome’s concrete floor is essentially the same layout as a year ago save the addition of Jersey barriers positioned on the inside of the corner exits. Officials laid down dirt all the way to the inside walls and placed large tractor tires in front of them in an effort to prevent drivers from pushing the tires in and getting so low on the inside of the turns that the cars’ wheels were on concrete floor as in the past. … Ultimate Southeast Super Late Model Series director Kelley Carlton is overseeing the Dirt Late Model competition while the midget and modified action is being officiated by Matt Curl, who spent the 2018 season as the World of Outlaws Craftsman Late Model Series director but recently announced his departure from the position because he’s returning to his hometown Fairbury (Ill.) American Legion as majority owner and promoter.

The third annual VP Gateway Dirt Nationals gets under way on Thursday at The Dome at America’s Center with the opening round of indoor action. Thursday’s program includes Late Model time trials and the $5,000-to-win Race of Champions.

The Late Model field will be split into two groups for Thursday’s time trials, with each group running a full show of heats, consolations and a 20-lap, $5,000-to-win feature on Friday. The top four finishers from each of Friday’s two preliminary features will be locked in to Saturday’s $30,000-to-win main event.

Along with Late Models, Thursday’s program will include modified time trials and heat races and an option practice session for midgets. DirtonDirt.com is offering live pay-per-view coverage from the three-day event.