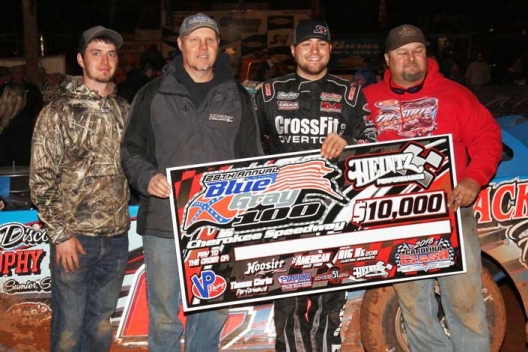 GAFFNEY, S.C. (Nov. 18) — Making the most of a cameo appearance in a Mark McLeod-Terry Caples-owned Rocket Chassis, Brandon Overton kept his remarkable second half of the 2018 season rolling Sunday afternoon at Cherokee Speedway.

Overton took the lead from Chris Ferguson of Mount Holly, N.C., on lap 92 and pulled away to win the Carolina Clash-sanctioned Blue-Gray 100, finishing 3.417 seconds ahead of Ferguson. Mike Maresca of Potsdam, N.Y., finished third for the second day in a row, while Cla Knight of North Augusta, S.C., and Justin Hudspeth of Ronda, N.C., completed the top five.

Overton earned $10,000 for his first triumph in Cherokee’s annual season-ender that has long been a southern staple. It marked his second triumph of the weekend following a victory Friday at Screven Motor Speedway in Sylvania, Ga., and brought his weekend haul to $15,000. Overton was appreciative of his opportunity to slip behind the wheel of the No. 24D for three straight nights.

“It’s pretty special to come over here and run these races … I can’t thank (car owners) Mark McLeod and Terry Caples (enough) for believing in me,” he said.

The 27-year-old standout from Evans, Ga., needed a stirring late rally to get the job done in Cherokee’s century grind, however. After a flat right rear tire sent him to the pits for a fresh Hoosier on lap 75, Overton rejoined the field at the back of the pack and roared back to the front.

He took advantage of a caution for second-running Chris Madden of Gray Court, S.C., that bunched the field with 10 laps remaining. Overton grabbed second from Maresca on the restart and slipped by Ferguson, who led a race-high 56 laps, on the next circuit and began to pull away.

“I’ve been wanting this one (Blue-Gray 100) for awhile,” said Overton in victory lane. “I don’t know what to say. I’m kinda out of breath. I love coming here … all these people here who come and watch this race. It’s amazing. Dirt track racing is alive and well and that makes me happy … let’s me know I’m gonna have a job. It was an awesome track tonight. Jason and all of the boys did a hell of a job.”

Starting on the outside front row, Ferguson grabbed the lead on the opening lap and paced the field through lap 38 when Overton grabbed shot ahead on a restart. Overton stayed out front for 26 laps until Chris Madden of Gray Court, S.C., took over on lap 65, while Overton slipped back to fourth. Madden and Ferguson battled for the top spot until Ferguson wrestled it away on lap 75. Chasing his second five-figure paycheck in as many days, Ferguson, who won Saturday’s Palmetto State 50 at Lancaster (S.C.) Speedway, stayed out front until Overton powered back ahead on lap 93.

“I had that flat tire there. I wasn’t being hard on it and then everybody just drove by me,” said Overton. “I guess they said I cut it. It ain’t wore out or nothing. (After) you come in and pit, it’s hard to beat new rubber. Congratulations to Chris (Ferguson) and them guys for making it the whole distance on one tire. That was good.”

Good. But not quite good enough to keep Overton at bay.

“I wasn’t saving nothing there at the end,” admitted Overton. “Right there at the beginning I really wasn’t driving that hard. I seen Scott (Bloomquist) out there on the race track signaling Chris (Ferguson) to go to the top. I didn’t want him to get out there and get gone so I just slid him and kinda took control and I really wasn’t spinning or driving hard or anything. They said the tire still looks brand new. It’s just got a big gash in it. That’s what happens when you run around that top up there. There’s rocks and stuff up there.”

Notes: Ferguson’s finish — combined with a win in Saturday’s Southern All Stars-sanctioned race at Lancaster Speedway and a runner-up finish to start the weekend in Screven Motor Speedway’s Ultimate Southeast Series-sanctioned Georgia State Outlaw Championship — gave him the points title in the weekend’s three-race mini-series. He pocketed an extra $1,200 from the $3,000 points money posted by the three participating tracks. … Four-time Blue-Gray 100 winner Scott Bloomquist of Mooresburg, Tenn., battled fuel pressure issues most of the day. He was the first retiree after completing just one lap in the feature. … New Yorker Mike Maresca was pleased with his second podium finish of the weekend, especially after making a 15-hour drive from his home in Potsdam. “Any time you run good, you’re happy,” he said. “It’s good for us. We come down pretty far (from New York) to run. We want to do good when we come down and we did. Hopefully we can go out (to Arizona for the Wild West Shootout in January) and have a couple of good runs there like we did here. That’d be cool.” … Overton is the first first-time winner of the event since Mike Marlar of Winfield, Tenn., won in 2012. … Eleven of the 23 starters completed all 100 circuits. … The race was slowed by 10 cautions, including two for rollover accidents. Ryan Gifford of Winchester, Tenn., got upside down in turn one on a lap-seven restart, while Anthony Sanders of Spartanburg, S.C., rolled over in nearly the exact same spot to draw a caution on lap 37. … This was the season-finale for the Carolina Cash Series.