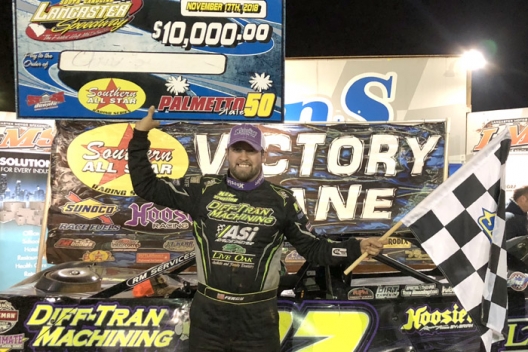 LANCASTER, S.C. (Nov. 17) — Chris Ferguson was able to take advantage of Scott Bloomquist’s misfortune long before the Southern All Star Series-sanctioned Palmetto State 50 ever began at Lancaster Speedway Saturday. Bloomquist had planned to enter the late-season event, but when his hauler broke down less than 30 minutes from the speedway, leaving the hall-of-fame driver unable to get his car and equipment to the track, Bloomquist instead shifted his focus to Ferguson, who drives a Sweet-Bloomquist Race Car.

With Bloomquist and his crew chief Cody Mallory lending a hand to the 28-year-old star from Mount Holly, N.C., Ferguson sailed to a $10,000 triumph. Ferguson, who started eighth, grabbed the lead from Zack Mitchell of Enoree, S.C., on lap 29 and dominated the remainder of the distance to score his second career Southern All Star Series victory.

Michael Brown of Pageland, S.C., finished 3.196 seconds behind in second, while Mike Maresca of Potsdam, N.Y., grabbed the final spot on the podium. Ross Bailes of Clover, S.C., and Brandon Overton of Evans, Ga., completed the top five.

Ferguson easily handled three restarts once in command and crossed the finish line comfortably ahead of runner-up Brown.

“That was awesome. It was a heck of track,” said Ferguson. “You had to really drive it different than we normally do here, but man this Sweet-Bloomquist car just drove flawless. The slicker the track got the better we got. I can’t say enough about Cody (Mallory) and Scott (Bloomquist). Cody and Scott broke down 20 miles down the road and they sent a truck up here. They told us to come pick ‘em up and Cody worked his ass off tonight and Scott was here helping us too. There was some really good cars we outrun and just like last night (at Georgia’s Screven Motor Speedway), anytime you can outrun them it’s a blessing.”

Ferguson cracked the top five on a lap-three restart and slid into fourth ahead of Ben Watkins a lap later. It took him awhile to get around Jeff Smith, however. In fact, he gave up the fourth position to Overton following another early restart and trailed the top three for much of the first half.

Mitchell, who led 27 of the feature's first 28 laps, ceded the top spot only briefly to Chris Madden on lap 19. But Madden slowed with mechanical trouble moments after assuming command and retired from the race, putting Mitchell back in front and putting Ferguson in third behind Mitchell and Overton.

Eight laps later, Ferguson had cleared Overton and was hounding Mitchell. He finally drove by with a low-side pass as they exited turn four.

“I started diamonding off my corners,” said Ferguson. “I started going in like they were, but then they would kinda hang and I could drive down the track because we had so much traction. The same thing off of (turn) two. We were just so good coming off the corner.

“Man, to God be the glory … that was a heck of a win. Anytime you outrun Michael Brown here, Ben Watkins, Ross (Bailes) … they’re all really good. And then anytime you outrun Brandon (Overton) it’s even better. I hate what happened to (Chris) Madden. I didn’t even see what happened to him I just all of the sudden seen Zack (Mitchell) in the lead, but I’m like, ‘Where’d Chris go?’ We were so fixed in on trying to hit our marks.”

It took the fifth-starting Brown awhile to work into contention as well. He managed to get around Overton for second on a lap-45 restart.

“There at the beginning, I was just letting everybody do their take and there wasn’t no give and take. I just finally had enough of that and figured it was time for me to take some,” said Brown. “That’s what we did. Billy Hicks gave me an awesome race car. I can’t thank him enough. It was a good night. Billy said I ‘bout give him a heart attack a couple times. I think I fell back to eighth or so. I was about to give up on myself. I finally had to dig deep and make it back to the front thankfully.

“I knew it was my time to go because everything kinda migrated to the bottom down here. All the run that you would get off the banking down here, you’d have to slow down, there really wasn’t no passing. I knew when I had a hole I had to go.”

Maresca, who started 20th, patiently worked his way through the field. Riding in the top five late, he was able to follow Brown by Overton on the restart.

“We struggled (early in the night),” said Maresca. “I think it was just me getting used to the long straightaways and how fast this place is. Then we got two flat tires in the heat race. Then in the feature (I) just kinda went out and started coming through the field … started missing those ruts a little bit and found something way down in the ditch. Nobody was really running there. We kinda moved up top and cut across the racetrack.

“I knew we were good. I knew we were better than two guys in front of us .. just kinda kept rolling and got (Brandon) Overton at the end there. Then the 79 (Brown) was in front of me. He was a good little bit in front of me. I was pretty happy with (finishing) third. Obviously we want to win, but I think we had a car that probably could have won and maybe a second- or third-place driver.”

Notes: The victory was Ferguson’s third of the season. … His previous Southern All Stars win came on Aug. 1, 2015, at Cherokee Speedway in Gaffney, S.C. ... Ferguson became the 14th different winner in 17 SAS races this season. ... Racing one night after clinching the Ultimate Southeast Series title at Georgia's Screven Motor Speedway, race-long leader Zack Mitchell lost second to Brandon Overton on a lap-38 restart, fell to fifth on lap 44 and slowed with race-ending problems one circuit later. ... Overton restarted second on lap 45 but was immediately overtaken by Michael Brown and Mike Maresca and shortly thereafter was passed by Ross Bailes, leaving him fifth at the finish. ... Bailes pitted for tires on lap 38, restarted ninth and rallied back to fourth. … Six caution flags slowed the race. ... The SAS visited Lancaster for the first time this season and the third time in series history. … Drivers accumulating the best finishes from Friday’s Ultimate Southeast Series race at Screven, Saturday’s SAS race and Sunday’s Carolina Clash Series event at Cherokee Speedway will earn money from a shared point fund.