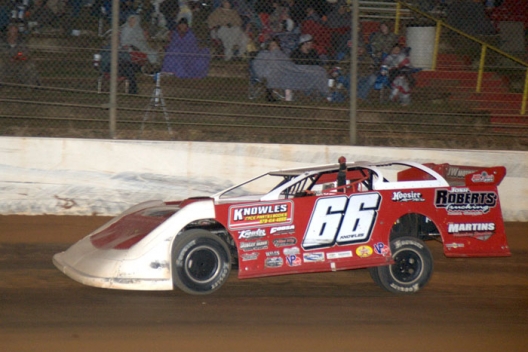 MILTON, Fla. — With only two events remaining on the 2018 Durrence Layne Chevrolet Series calendar, Jake Knowles needed to find an edge in the tour’s tight points battle. He found just the advantage he was looking for in Milton, Fla. Knowles, of Rome, Ga., drove to his fourth series victory of the season Saturday at Southern Raceway, winning the 11th annual Southern 100 while collecting a $10,000 payday.

Knowles, who inherited the lead on lap 25 when then-leader Travis Pennington of Stapleton, Ga., slowed with a flat tire, withstood a bevy of cautions — 14 total — but raced relatively unchallenged after taking over the top spot. He said racing on Southern Raceway’s always tricky surface was as much about tire management as anything else.

“This was the first time I have been here racing in the sand, but I knew I had to be patient, manage my tires, and try to get through the lapped traffic without abusing them,” Knowles said. “I knew Andy (Picklesimer) was close to me in traffic, but I knew he would race me clean when it came down to racing for the win. I was just trying to run just fast enough to stay out front.”

As the series for Crate Late Models headed to the gulf coast for its 14th race of the season, Knowles trailed series leader Ashton Winger of Fayetteville, Ga., by 48 points. Both had three series wins. Trying to close the gap before heading to the final race of the season Nov. 23-24 at Magnolia Motor Speedway in Columbus, Miss., Knowles caught the break he needed when Winger had trouble on lap 68.

Winger, who had already experienced the misfortune of an early race spin while running third, was trying to race his way back into the top five. He managed to climb back to eighth, but on a restart following a lap-69 caution, Winger suddenly slowed. Monte Skinner of Saraland, Ala., couldn’t avoid Winger and crashed into the left side of his slowing machine.

Winger’s bad luck — he was credited with 19th place at the finish — allowed Knowles to trim 36 markers from the points lead. As the tour heads to Mississippi in three weeks for the season finale, Knowles trails Winger by a scant 10 points.

With Winger off the track Saturday, Knowles was left to simply concentrate on hitting his marks in order to stay ahead of Picklesimer. Picklesimer managed to keep pace, but barely. He cut down a right-rear tire on the final circuit, but somehow managed to keep Joyner at bay.

“I think I used more energy in the last half lap of the race than I used in the 99 previous laps just to get to the checkered flag,” said Picklesimer. “I don’t know what it is about this place, but we always seem to do well here. This sand is so much different than what we race on at home, so maybe I just need to move down here, and I know the weather is better most of the year.”

Notes: Previous series victories for Knowles came at Greenville (Miss.) Speedway; Talladega Short Track in Eastaboga, Ala.; and North Alabama Speedway near Tuscumbia. … Fourteen of the 24 starters finished the race, with 12 completing all 100 circuits. … Early leader Travis Pennington rallied from his flat on lap 25 to finish seventh. … Tennessean Oakley Johns finished 17th after starting sixth. … Cory Hedgecock of Loudon, Tenn., who led the series points through the tour’s Oct. 6 stop at Smoky Mountain Speedway in Maryville, Tenn., was not in attendance. … The series wraps up its season Nov. 23-24 with the Possum Town Grand Prix at Magnolia Motor Speedway in Columbus, Miss. … The Southern 100 and the PTGP are the tour’s richest races of the season, with each paying $10,000 to win.