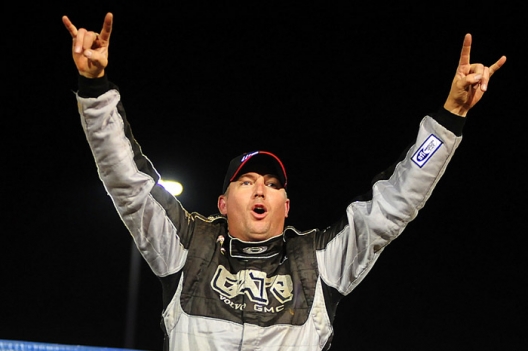 Todd Boyd/photosbyboyd.smugmug.com
Chad Simpson celebrates in victory lane at Lucas Oil Speedway.
What won the race: Capping off his second career Lucas Oil Midwest LateModel Racing Association championship with a $5,000 victory, Chad Simpson of Mount Vernon, Iowa, took command when leader Logan Martin had trouble late and led the rest of the way in the fifth annual Fall Nationals at Lucas Oil Speedway.
Quotable: "The track was brutal. I knew it would be a survival-type deal," Simpson said. "I just had to wait for those guys to mess up and that's when I could take my shot. I was just scared to death that I was going to make the same mistake."
Key notes: Simpson inherited the lead with four laps remaining when Logan Martin, who rallied after being involved in a lap-four caution, hit the wall in turn three in a race in which only eight of the 24 starters made it to the finish. ... Jesse Stovall and Tony Jackson Jr. also took turns out front with Stovall leading a race-high 24 laps. ... Lucas Oil Speedway's fifth annual Fall Nationals was scheduled as a doubleheader but Friday's program rained out. ... The event was co-sanctioned by the Comp Cams Super Dirt Series.
Winner's sponsors: Simpson's Black Diamond Chassis has a Jay Dickens Racing Engine and is sponsored by Liebe Trucking, GATR Truck Center, Diercks Ltd., Simpson Farms, Graves Oil, Allstar Performance, Wehrs Machine, Dyer's Top Rods, Performance Bodies, Master Built Concrete, Cen-Pe-Co and Phase2Sign Supply.
Points chase: Winner Chad Simpson of Mount Vernon, Iowa, clinched his second MLRA championship; runner-up Jack Sullivan of Greenbrier, Ark., tops the Comp Cams standings.
Car count: 44
Heat race winners: Scott Crigler, Logan Martin, Chad Simpson, Mason Oberkramer, Tony Jackson Jr.
Consolation race winners: Matt Furman, Kaeden Cornell
Editor's note: Corrects rundown throughout.
By Lyndal Scranton
Lucas Oil Speedway

"I'm a little choked up right now. It didn't hit me until after we took that checkered flag," an emotional Simpson said in victory lane after earning $5,500 in a hard-fought, 40-lap race of attrition. He and the Brinkmans also teamed to win an MLRA championship in 2014.

Simpson inherited the lead with four laps remaining when Logan Martin of West Plains, Mo. — who rallied from the back after being involved in a lap-four caution — hit the wall in turn three in a race in which only eight of the 24 starters made it to the finish. Comp Cams Super Dirt Series points leader Jack Sullivan of Greenbrier, Ark., finished second in the event co-sanctioned by that Arkansas-based tour with Raymond Merrill of Sallisaw, Okla., third and Terry Phillips of Springfield, Mo., fourth on a track that took its toll on equipment and nerves after a rainy week.

The 39-year-old Simpson began the weekend of racing, which was shortened after a Friday rainout, just 24 points ahead of Will Vaught in the MLRA title chase. Things took a bad turn for Vaught four laps into the feature, through no fault on his own.

Early race leader Tony Jackson Jr. slowed dramatically coming out of turn two on lap four and Vaught, running in second, had no place to go and plowed into the rear of Jackson's car. Vaught, with front-end damage, had to restart at the rear of the 24-car field and. He made up seven positions before slowing and pulling into the pits on lap 10, his night and title chances over.

Simpson made it clear earlier in the week that he wanted to not only win the title for himself, but for the Brinkmans. The fellow Iowans, who are retiring from the sport, joined Simpson in a joyous victory lane celebration.

"It's just been a great run with these guys," Simpson said, fighting through tears.

The feature race saw four different leaders with Jesse Stovall leading a race-high 24 of the 40 laps. Along with four cautions, there was a red flag on lap 12 when J.C. Wyman, Jeremy Grady and Mitch McGrath had hard contact in turn two.

"The track was brutal. I knew it would be a survival-type deal," Simpson said. "I just had to wait for those guys to mess up and that's when I could take my shot. I was just scared to death that I was going to make the same mistake.

"The track was rough, but it definitely has got some character."

Stovall passed Jackson coming out of turn two on lap six to take over the lead. He would hold onto it until a caution flew on lap 28. Simpson, who started eighth, had worked his way into second with Sullivan running third and Payton Looney fourth.

By that point, only nine cars remained in action. During the caution, with the drivers allowed to stop and trade out helmets if they chose and get new tear-offs for their visors, it was determined that the race would be shortened by 10 laps.

On the restart, Simpson rocketed into the lead as Stovall fell back to fourth. Simpson would stay in front for four laps until Martin, who restarted sixth, shot past Simpson in turn two to take his first lead of the race.

Just as it appeared that Martin was on his way to victory, he slid too high in turn three, slapped the wall and came to a stop to bring out another yellow. It was a heartbreaker for Martin as he dejectedly sat down by his damaged vehicle as the wrecked made its way to him.

"He definitely had a good race car, too, and I hated to see him lose it like that," Simpson said of Martin, who wound up ninth. "We lost one earlier like that. We got it back tonight."

That gave Simpson the lead with four laps to go, ahead of Sullivan, Stovall and Looney. Simpson was up to the challenge on the single-file restart, navigating the bumpy surface despite a big hop in turn three of the final lap, to earn his third MLRA victory of the season.

The winner's share included a $500 bonus in honor of Ron Jenkins, who built the original Wheatland Raceway.

Payton Looney of Republic,, Mo., finished fifth and nailed down MLRA Sunoco Rookie of the Year honors with his eight top-five finish of the series season.