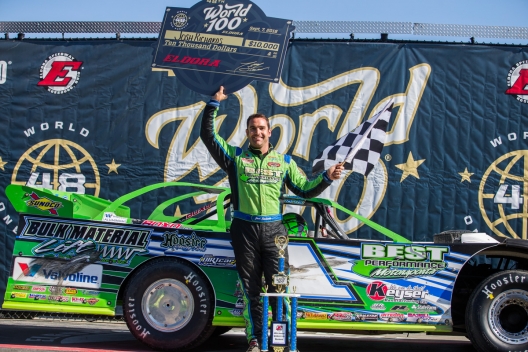 Richards, 30, of Shinnston, W.Va., reached victory lane for the first time in over eight months, turning back restart challenges from Mike Marlar of Winfield, Tenn., and Chris Madden of Gray Court, S.C., to capture the 25-lap odd preliminary feature for the World 100.

“It feels fantastic,” Richards said after climbing out of his Best Performance Motorsports XR1 Rocket car on Eldora’s winner’s stage. “I almost forgot what it feels like to be up here.

“It’s been a little bit of a tough year,” he continued. “We’ve had some speed, we just haven’t had things go our way. It feels good to finally get one.”

The five-time national touring series champion rolled off the outside pole to lead the entire distance, but his $10,000 score didn’t come without some moments of trepidation. Marlar nosed underneath Richards on a lap-six restart and Madden did the same following a lap-12 caution period, but neither driver was able to shake Richards from the top spot.

Madden, 43, lost ground to Richards racing through lapped traffic in the closing circuits and settled for runner-up money, a half-straightaway behind the victor. Marlar finished a healthy distance farther back in third while Don O’Neal of Martinsville, Ind., nipped Earl Pearson Jr. of Jacksonville, Fla., by inches at the finish line to claim fourth place.

Richards felt the pressure applied by Marlar and Madden but didn’t wilt when it came. He appreciated that neither driver forced the issue in a bid to overtake him.

“I just gotta thank Madden and Marlar,” Richards said. “They both gave me room on those restarts. I wasn’t sure to pick the top or the bottom (lane), and they left me just enough room off of (turn) two (to power off the outside and remain ahead).”

Richards controlled the race’s second half but had to be careful negotiating the sun-baked afternoon surface.

“It’s tough because it was starting to rubber in patches and was really slick in patches,” Richards said. “It was coming and going, but the car was good. We’ll just have to tweak on it for tonight and hopefully we can stay up front.”

Richards, whose only previous triumphs in 2018 came when he swept the Feb. 2-3 Lucas Oil Late Model Dirt Series season-opening doubleheader at Golden Isles Speedway in Brunswick, Ga., ended up as the overall top points earner in the World 100 preliminaries and spun a three-car invert for the heat races during Saturday night’s finale. While he has won a crown-jewel preliminary feature at Eldora in the past (2013 Dream), he’s chasing his first triumph in one of the half-mile oval’s two marquee Dirt Late Model events.

Both Madden and Marlar are also winless in Eldora crown jewels but stamped themselves as contenders with podium finishes.

Madden was one of the prelim’s top movers, hustling forward from the eighth starting spot. He reached second place with a lap-eight pass of Marlar and actually sliced Richards’s 1.6-second edge in half in a matter of three laps before a lap-12 caution flag dulled his momentum.

“We didn’t need that yellow there,” Madden said. “(The track) started rubbering after that caution.”

Nevertheless, Madden did have one more opportunity to snatch the lead from Richards. On the lap-12 restart he dived underneath the leader through turns one and two but was uncertain if he had the room to safely slide ahead of Richards.

“I don’t know if I had him cleared going into one or not after that caution,” Madden said. “I try to race everybody clean, and I probably had him cleared down there and should’ve drove up the racetrack and took his line away from him but I didn’t.”

The race’s two caution flags were caused by polesitter Duane Chamberlain of Richmond, Ind., who immediately slipped out of the top five at the initial green flag and then slowed with left-rear suspension trouble on lap six, and Bobby Pierce of Oakwood, Ill., who fell off the pace on lap 12 with a left-rear flat tire sustained in a homestretch scrape with Michael Chilton of Salvisa, Ky.

Steve Roberts tip-toed around the ever-slicker afternoon surface to score the win, beating Steve Casebolt by 0.677 of a second. Jon Henry placed third and Jason Jameson, who forfeited a heat-race transfer spot to DQ for failing to report to the post-race technical inspection area, charged from the rear to finish fourth and transfer to the A-main.

Shane Clanton cruised to a wire-to-wire victory, taking the checkered flag 0.937 of a second in front of Earl Pearson Jr., who slipped by Devin Moran for the runner-up slot on lap one. Pearson closed in on Clanton late but never drew close enough to challenge. Moran, who lost second to Pearson after he grazed the turn-two wall, settled for third and Chris Simpson placed fourth after ducking underneath Donald McIntosh off turn four on lap seven.

Outside polesitter Chris Madden shot to the inside of the track on the opening lap to assume command and never looked back en route to a flag-to-flag triumph by 2.825 seconds over Mike Marlar. Bobby Pierce made an early vault from seventh to third and finished in the show position while Brian Birkhofer was fourth, leaving fifth-place Zack Dohm, who entered the program leading the World 100 points standings, on the outside looking in for the feature.

Josh Richards pulled a textbook slider on Duane Chamberlain to grab the top spot from the race-long leader with two laps to go and drove away to capture the non-stop event. Chamberlain settled for the runner-up position, 2.140 seconds behind Richards, while Jason Jameson crossed the finish line in third place but didn't report to the post-race technical inspection area in the pit area, disqualifying him from his run. That moved Michael Chilton, who nipped Jonathan Davenport for what appeared to be fourth and final transfer spot, to third and elevated Davenport to the fourth position and a berth in the feature.

Backing up his qualifying effort in which he set a new track record, Brandon Sheppard ducked underneath Don O’Neal off turn four heading to the white flag to grab the lead and march on to victory. O’Neal, who led laps 2-8 after passing polesitter Steven Roberts, finished 0.377 of a second behind the winner in second. Shannon Babb advanced from sixth to place third and Dale McDowell claimed the final transfer spot.

A 78-car field is signed in for Saturday’s postponed preliminary program, which began virtually right on schedule with hot laps at 10:30 a.m. Eight heat races plus B-mains and two 25-lap, $10,000-to-win features are on the agenda. … The rain that washed out Friday night’s program continued through the overnight hours; at one point the temperature dipped low enough that snow actually fell over the speedway for a short period. Teams and campers awoke Saturday morning to chilly temps in the high 30s, but sun began breaking through shortly before the start of practice and skies are forecast to remain clear throughout the day with highs climbing into the low 50s. … Seven haulers were parked outside the track in the upper pit area on Friday, but Eldora officials moved all of them into the infield which will help hasten the alignment of the Saturday’s races. … The track surface was extremely quick during hot laps with Josh Richards of Shinnston, W.Va., topping the speed charts at 14.899 seconds, putting him just a tick off the track record. Kent Robinson of Bloomington, Ind., also broke into the 14-second bracket with a circuit of 14.998 seconds. … Officials plan to run off the afternoon preliminary action and then immediately begin clearing the grandstands and sweeping the pits while track crews work on track maintenance to prepare for the evening’s World 100 finale. Heat races are scheduled to begin at 7 p.m.

Friday night’s World 100 preliminary program at Eldora Speedway in Rossburg, Ohio, was postponed by rain that arrived during the drivers’ meeting, setting up a doubleheader on Saturday.

Officials will open the track’s gates on Saturday at 10 a.m. and begin hot laps at 10:30 a.m. for Friday’s program, which will include eight heats and four consolations to set the fields for the pair of 25-lap, $10,000-to-win preliminary features. The stands will be cleared following the completion of the afternoon action and then the evening card that features heats, consolations, scrambles and the 48th annual World 100 finale will be run as scheduled.

A total of 77 cars went through inspection on Friday afternoon for the restart of the World 100 weekend, which was stopped on its original Sept. 6-8 date by rain that set in following the completion of the first preliminary program on Thursday night.

Those who purchased a pay-per-view video package for Friday’s program will receive access to watch when it is made up starting Saturday morning.