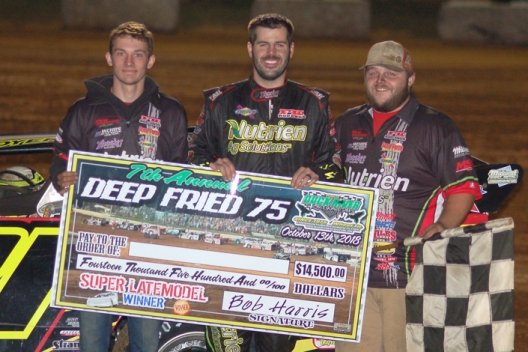 WHEEL, Tenn. — Billy Moyer Jr. knew he needed to do two things right to secure a victory in Saturday’s Deep Fried 75 at Duck River Raceway Park. First, he needed to make sure he didn’t overthink his car’s setup. Second, he knew it was imperative that he get the jump from his pole position on the opening lap.

Moyer was spot on in both cases and then he simply checked out. Leading all 75 circuits around the quarter-mile middle Tennessee bullring, Moyer, of Batesville, Ark., cruised to a career-best $14,500 payday, becoming the seventh different winner in the seventh annual event.

“I started in the right spot of course,” said Moyer. “I knew getting that jump (at the start) was big. I wanted to get the jump. I wanted to get in clean air and I wanted to set my own pace because I didn’t want to use my right front tire up with this tire rule and I feel like the car was pretty dang good.”

Moyer won by .928 seconds ahead of fellow front row starter Riley Hickman of Ooltewah, Tenn., while Victor Lee of Campbellsville, Ky., advanced from eighth to finish third. Morgan Bagley of Longview, Texas, finished fourth after starting 14th and Austin Rettig of Sikeston, Mo., completed the top five after starting well back in 16th.

On a track that developed a distinctly dominant bottom groove early before eventually taking rubber, Moyer knew his best bet was to get the lead at the start. He knew that holding onto the lead was highly dependent on the decisions he made both on the track and in the pit area before 75-lapper.

“I knew in that dash (Friday) we had a really good car,” Moyer said. “But I’ve been good, like at Richmond (Raceway in Kentucky) a couple weeks ago it felt pretty good and I got my butt handed to me in the feature. So tonight I made a few small changes. Really I don’t feel like I would’ve changed anything after the dash. I came back (after the dash) and we didn’t really do anything (to the car).

“Then we hot lapped today and I didn’t feel like I was very good. You know, what the hell do I do now? It’s the same track. When we hot lapped, they ran around that bottom so everybody used that little bit of a spot down there, they pushed the tires back out where you could race. I was off. I was seventh or eighth hot lapping. But I tuned on it.”

While he felt he had to make a slight change, Moyer was reluctant to tweak too much.

“So tonight I’m like, do I just leave myself alone, like at Richmond I left the car alone and I wasn’t no good. I didn’t make the right adjustments. I always take good notes and I’m always trying to think. I always want to make sure the car’s the best. I’m not the best driver out there. That’s why I want to give myself the best (chance to win). I tweaked on that thing and finally, in that feature if I could go right back again I don’t think I’d do anything different.”

Hickman, who had a back-and-forth battle with Tanner English of Benton, Ky., until English departed with a flat tire on lap 52, ran a comfortable second, but he was never able to mount a serious bid for the lead. Hickman managed to close his Competition Racing Equipment house car in on the leader occasionally in lapped traffic, but when the caution waved on lap 68, giving Moyer a clear track again, his fate was sealed.

“Congratulation to them guys. They just had a better car then we did,” Hickman said. “I didn’t want to see (the last caution). I don’t know if I could’ve done anything, but hopefully I could’ve made it interesting. Well take it .. (the car is) in one piece … and go on. It’s been fun getting to race with these guys. Not sure how much more I’m gonna get to race with them, but it’s been fun.

“Glad we were able to come over here and get a podium finish. I kinda thought second was where we needed to start at in the race there. But I was just asleep over there a little bit on the start and just couldn’t make it happen.”

Like Hickman, Lee was resigned to accept his position as well. Starting eighth, he was in the right spot to take advantage when third-starting Josh Putnam of Florence, Ala., exited with mechanical trouble on lap 16 and both Rusty Schlenk of McClure, Ohio, and English gave up their top-five spots on lap 52.

“We got in line there and was just really riding,” said Lee. “A couple of guys had some issues with some flats. … Good car here. We’ve run this thing the last five or six weeks and had some really good runs in it. Tonight we were just riding around here in a line (on) a locked down racetrack. But all in all, it was a good weekend for us.”

Notes: Fourteen of the 24 starters were running at the finish, with 12 completing all 75 circuits. … Rain drops began to fall on lap 51, but the precipitation held off long enough to get the main event in the books. … In seven Deep Fried 75s, there has yet to be a repeat winner. Moyer Jr. joined his hall-of-fame father Billy Moyer (’16), as well as Brandon Overton (’17), Frank Heckenast Jr. (’15), Riley Hickman (’14), Josh Putnam (’13) and Vic Hill (’12) as an event winner. … This year’s race drew one of the most diverse fields ever assembled at the 35-year-old facility. Thirteen states were represented, with the home state’s 19 drivers leading the way. There were three drivers from Alabama and two each from Georgia, Kentucky and Texas. States with one entry: Arkansas, Illinois, Iowa, Minnesota, Mississippi, Missouri, Ohio and West Virginia. … Victor Lee’s third-place finish marked the first time in three visits to Duck River that he has finished a feature. … In five visits to DRRP, Rusty Schlenk has yet to finish a main event. … Morgan Bagley’s fourth-place finish was a nice reprieve for the Texan who said he battled electrical issues with his hauler’s generator all weekend, forcing him to borrow electricity from a neighboring competitor. … Four drivers — Moyer Jr., Josh Putnam, Jonathan Rowan and Vic Hill — opted to compete at Duck River than return to this weekend’s rescheduled World 100 at Eldora Speedway in Rossburg, Ohio, where they each took part in preliminaries for the Crown Jewel event on Sept. 6. … The inaugural Deep Fried 75 paid $10,000 to win and has seen an increase every season beginning with the third event.

With rain forecast for later in the evening, track officials were trying to push Saturday’s show along. The consolation races were wrapped up by 7:05 p.m. and the planned intermission was bumped to after the Super Late Model main event, which is the fourth feature in night’s lineup. … Rusty Schlenk of McClure, Ohio, felt confident in his chances following Friday’s dash for the top six qualifiers, which set the lineup for the first three rows of the 75-lap feature. … “We’re a little bit off right now. We’re definitely a top-five car,” said Schlenk. “I know we’ll be in contention at some point, but I’ve got a little tuning to do. This place is a different animal and we’re not used to this tire rule. We came down here with all the wrong tires. I’ve been thrashing to groove these 1600s. I didn’t realize the 1600 that they’re allowing you to run down here is a white dot, which is softer than out 40s. We were thrashing. I borrowed a left rear tire from Michael Page just to qualify on because I didn’t have one. But we’ve got everything now, so I think we’ll be alright.” … Page, of Douglasville, Ga., struggled all weekend. After hitting the wall during qualifying on Friday, he eventually finished fourth in his heat. Rolling off from the pole of the first consolation, his car shot up the track in turn two and he slowed to bring out a caution before pulling off the track without making a lap. … Victor Lee of Campbellsville, Ky., is happy so far in his third-ever trip to Duck River Raceway Park. He’ll start eighth after winning Friday’s second heat. “The other times I was here they almost rained it out with the water truck. I think the track was pretty good (Friday).” … Rob Toland of Davenport, Iowa, hoped to get some laps on a new Rocket XR1-Jay Dickens Racing Engines combo, but his after slipping from second to fourth in his heat on Friday, his weekend worsened when he suffered mechanical trouble on the opening lap of his consolation race. … Toland is among a handful of drivers making their first-ever visit to Duck River. Among them also is Jared Hawkins of Fairmont, W.Va., who is driving the Tim Logan Racing No. 11. “We really haven’t been very good for about the last four weeks,” said Hawkins, who will start 18th in the feature. “It’s good and then it’s not. The track was actually pretty good Friday, if we could just get (the car) better.” … Only two drivers — David Seibers and Brad Skinner — had qualified for all six Deep Fried 75s entering the weekend and their streak continued when Seibers, of Chapel Hill, Tenn., secured the final transfer spot in the first consolation. Skinner, of Spring Hill, Tenn., qualified third in his group Friday and will start the feature from the sixth position. … There are three former Deep Fried 75 winners in the starting field: second-starting Riley Hickman (’14), third-starting Josh Putnam (’13) and Vic Hill (’12), who starts 17th. ... Caleb Ashby of Cunningham, Tenn., had mechanical issues Friday and scratched for the weekend.