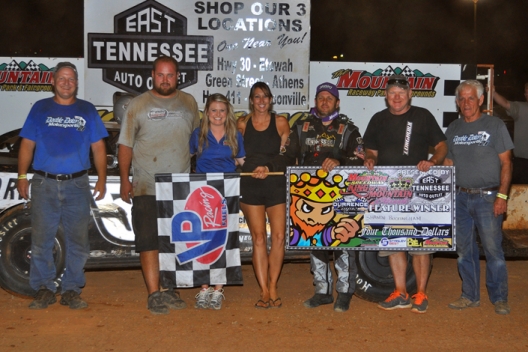 Michael Moats/mrmracing.net
Shanon Buckingham enjoys his DLCS victory with his crew.
What won the race: Shanon Buckingham of Morristown, Tenn., cruised to a dominating victory in Saturday’s Durrence Layne Chevrolet Series race at Smoky Mountain Speedway. The second-starting Buckingham earned $4,000 for his victory ahead of series leader Cory Hedgecock and Michael Courtney.
Quotable: “It’s been so long since we’ve raced with the Durrence Layne Series, I wasn’t sure what we had tonight because we just put this all together this week with an engine straight out of the box and a basic set up on our chassis,” Buckingham said. “I didn’t know I had that big of the lead, but I kept seeing Cory Hedgecock climbing the ladder on the scoreboard, so I didn’t know how close he was to us.”
Key notes: Buckingham dominated the evening, setting the quick time, winning his heat and leading all 50 laps of the main event. … He returned to action in the Crate Late Model series after an eight-year absence. … Buckingham led by as much as 6.5 seconds and held a 5.7-second advantage with 10 laps remaining. After a late caution, the final margin of victory was 1.805 seconds. … On his way to a runner-up finish, Hedgecock, who started 14th, was up to fourth by lap 30. … The race was slowed by three cautions. … Half of the 24 starters completed all 50 circuits.
On the move: Ashton Winger of Senoia, Ga., started 18th and finished fifth.
Winner's sponsors: Buckingham’s Longhorn Chassis is sponsored by Double Down Motorsports, Tennessee RV Supercenter, Grand Design Recreational Vehicles, Hard Rock Cafe, Classic Rock 103.5 WIMZ, Maxima Racing Oils and FK Rod Ends.
Points chase: Before Smoky Mountain, Cory Hedgecock (942) of Loudon, Tenn., led Ashton Winger (890), Jake Knowles (852), Andy Picklesimer (748) and Jamey Boland (730).
Car count: 33
Fast qualifier: Shanon Buckingham
Time: 17.301 seconds
Consolation race winners: Josh Henry, Matt Steward
Provisional starters: Andy Picklesimer, Jamey Boland
Next series race: November 23, Magnolia Motor Speedway (Columbus, MS) $10,000
Editor's note: Results and race details are unofficial.