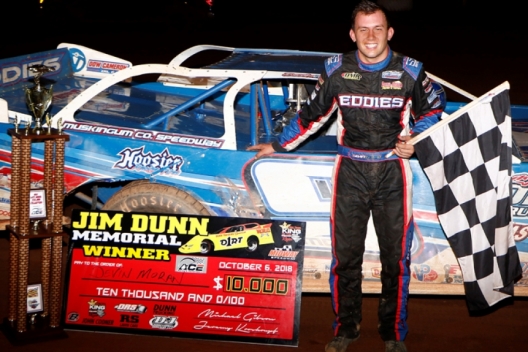 Charging to the front of the field at the drop of the green flag, second-starting Moran led the entire 60-lap distance, outrunning fellow front-row starter Mike Benedum of Salem, W.Va., to win the race honoring the inaugural Dirt Track World Championship victor.

“We’ve been running really well, we just haven’t figured out how to get in victory lane consistently enough yet,” Moran said after the race. “It’s definitely an awesome feeling. I’ve raced in this race I don’t know how many times. My dad’s won it so many times and I’ve never won it before. I’ve led and everything else. It’s pretty cool to finally win it.”

Successfully navigating lapped traffic, Moran was never seriously challenged up front, pulling away in the final laps to capture his third victory of the 2018 season.

“It’s awesome,” Moran said of his victory. “We thought about going to Pittsburgh. But (Midway) is so close to home and I love coming here and racing. I’ve won a couple of races here. It’s fun to come to this place to race.”

While Benedum was able to keep pace with Moran on restarts, he was never able to make a pass for the lead.

“We were biding our time there for a long time,” Benedum said. “(Moran) got a good start on the initial start. I’d aggravate him a little bit on some of those restarts. I thought maybe we’d be able to catch him in lapped traffic. But towards the end my car went away a little bit and he was still pretty stout.”

Rallying from the 13th starting spot, Larson, a World of Outlaws Craftsman Late Model Series Rookie of the Year contender, notched one of his best finishes of the 2018 season in his first-ever appearance at Midway.

“It’s not too bad,” Larson said. “We come from 13th there, passed a few cars and (we are) happy about it. I can’t complain. … The track got pretty racy there. I had my concerns earlier with the rain. But it came right around.”

Notes: Moran scored his third victory of the 2018 season, his first since July's Prairie Dirt Classic at Fairbury (Ill.) American Legion Speedway. ... In the last six Late Model events Moran has entered, he's finished no worse than fourth. ... Midway hosted the 36th annual Jim Dunn Memorial, honoring the the inaugural Dirt Track World Championship winner from Roseville, Ohio. … The event began in 1983 and has been run at four different tracks. ... The race was reset for Oct. 6 after its original May date was rained out. ... Moran's father Donnie is a six-time Jim Dunn Memorial winner. His most recent victory in the annual event came in 2008.