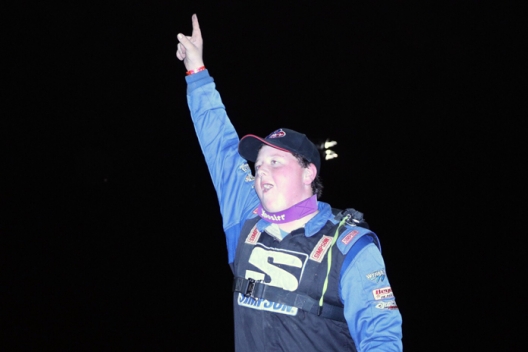 JAMAICA, Va. — Logan Roberson has been the bridesmaid in eight Fastrak-sanctioned events. No more. Roberson, of Waynesboro, Va., raced to the biggest win of his career on the tour’s biggest stage as he captured the $20,000-to-win Fastrak World Championship Saturday at Virginia Motor Speedway.

Roberson reclaimed the lead from Michael Brown on lap 52 and kept him at bay the rest of the way to claim a career-high victory. Brown, who grabbed the lead on lap 51 only to relinquish it on the next circuit, finished second, while Tyler Bare was third. Ross Bailes, last year’s winner, was fourth, while Matt Long  completed the top five.

“I don’t know what to say. Me and my dad work our butts off in the shop at night to come here to do this,” said Roberson. “To get my first Fastrak win against all these good guys … man, I don’t know. I am crying like a baby. I am just so excited. We are just a small-funded team but we got it done tonight.”

Jensen Ford and Roberson led the 31-car field to green with Ford grabbing the lead out of turn two. Roberson got by Ford for the lead on lap four as they raced out of turn four. Ford retired with mechanical trouble, while Roberson stretched his lead over second-running Tyler Bare by 10-car lengths until lap the leaders began to work traffic.

On lap 20, Bare got inside Roberson out of turn two and looked to have a run good enough to take the lead only to have a caution come out for a car stopped in turn four. On the restart Roberson pulled away as a battle for second developed between Bare and Michael Brown. On lap 23 Brown swept to the outside of Bare to take second and set out to catch Roberson.

Two laps later the leaders began working traffic again and Brown closed on Roberson’s bumper. But the battle for the lead was thwarted by a caution on lap 31. On the restart Roberson once again pulled away until he began to run into lapped traffic yet again. Brown finally got back to Roberson’s bumper and on lap 51 got inside Roberson for the lead. Roberson would quickly regain the lead on the next corner with a strong move out of turn two.

A final caution on lap 54 tightened the field back to Roberson’s bumper for the restart, but Roberson was able to hold off Brown over the final six laps.