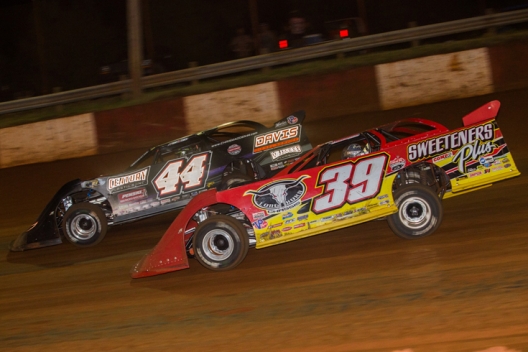 ROME, Ga. — Making a long overnight haul from Ohio pay off, Chris Madden of Gray Court, S.C., won Sunday’s Rome Showdown at Rome Speedway. The third-starting Madden swept to the outside of leader Scott Bloomquist of Mooresburg, Tenn., to lead lap 10 and never trailed again as he paced the final 41 laps for a $10,000 victory.

Madden survived a hoard of cautions and a late charge by Tim McCreadie of Watertown, N.Y., to win his first Lucas Oil Dirt Late Model Series race of the season. McCreadie, who had an up-and-down night after having to replace his car’s oil cooler following hot laps, settled for second.

Just 24 hours earlier, Madden was at Atomic Speedway in Alma, Ohio, where he competed in a pair of Word of Outlaws Craftsman Late Model Series events. The WoO regular finished ninth at Atomic on Friday and sixth on Saturday and before deciding to make a beeline for Rome.

“Barry (Wright) was probably looking at me like I was crazy when I told him we wanted to go to Rome today,” Madden said. “We traveled eight hours from Ohio down this morning. Those guys did a heck of a job getting this thing ready for me today. Just thanks to everybody who’s a part of our sport and part of our racing here.”

Madden wasted little time showing Wright — the Hall of Fame chassis builder from Cowpens, S.C. — that the decision to make the side trip rather than driving directly home was the right one. He powered to the outside of second-running Jimmy Owens of Newport, Tenn., on lap eight and did the same to Bloomquist on the next circuit.

“I knew I had to get the lead there pretty early if we were gonna be able to get it and then try to set our own pace, but there ain’t no more setting paces anymore in our sport,” Madden said. “Our sport it’s all you can get every lap. About 20 or 23 (laps) to go there we started having a little skipping and popping problem. I was trying to figure out whether I was gonna take off in front of the field and crash ‘em or not. I don’t know what it is, it’s just down a little bit and skipping there, but it worked out for us.

“It was really awesome because when we first got here I seen how wet the bottom was and I was scared it was just gonna be a bottom-feeding racetrack. Actually, (Brandon) Overton kinda showed me the line there. After we moved up, we had a great race car.”

Once in the lead, Madden had to do control the pace after each restart. The race was slowed by nine cautions, including one with two laps remaining. But McCreadie couldn’t build enough steam to get around the leader.

“The last (caution) didn’t help,” McCreadie said. “It was a green-white-checkered. I thought it was gonna be (two green-flag laps), but it is what it is. I needed that long run. We starting tracking Chris down a little bit. Maybe he didn’t know I was coming and maybe we could have snookered him.

“All in all, to knock the oil tank out of the car in hot laps when we were really good … it really put us behind the way the rules are we couldn’t time as good as we actually did. It’s really to (the credit of) Phillip, Justin, Matt and a couple of Jimmy Owens’s guys who helped out. The oil tank we had wasn’t the right one and it just was a mess. To overcome that and to pass a bunch of cars in the feature, we’re happy. The last three weeks we’ve got a car that was really competitive and it’s been a lot of hard work by them guys. I’m just lucky to drive it.”

McCreadie, who started 10th, managed to stay one step ahead of 11th-starting Davenport as the two worked their way forward. Closing in on his second Lucas Oil Series championship, Davenport was content to take it easy as he focused on series points for the second night in a row after finishing second Saturday at Dixie Speedway. His podium finish Sunday — combined with a 17th-place finish by Josh Richards of Shinnston, W.Va. — all but assured that his Lance Landers-backed team will indeed be celebrating a championship following the tour’s finale at Portsmouth (Ohio) Raceway Park on Oct 20.

“I know how this place is for rocks and flat tires,” Davenport said. “I knew the cushion was the fastest way around, but I was just points racing tonight. We were just biding our time early. I kept getting caught behind one car there and he would mess up on the restart. He would get passed and then I would get passed, so then we’d line up again right behind him. Finally I got cleared of him and got to rolling pretty decent in the bottom and the middle there. Congratulations to Chris and Barry and Lance and everybody back at their shop. I know they work hard.

“I ain’t real good at math, but I think we might have clinched (the championship) tonight. I hate the bad luck for Josh (Richards) there. He was doing what he had to do, (getting) up on the wheel. I was trying to be patient and do what we had to do to, like I said, just get our ultimate goal done and I think we got that done tonight.”

Davenport was up to third when Overton, of Evans, Ga., pitted with a flat tire on lap 42, drawing the eighth caution of the night. From there, he had a perfect view of Madden and McCreadie as they battled for the lead.

“I was just watching them there,” Davenport said. “I just backed off and let them have their own race. I wasn’t gonna push the issue if they did get into one another I didn’t want to get in the middle of it. But it was a hell of a race.”

Notes: Madden finished 0.297 seconds ahead of McCreadie. … Madden earned his ninth-career Lucas Oil Series victory and first since April 1, 2016 at Boyd’s Speedway in Ringgold, Ga. … Like, Madden, Shane Clanton of Zebulon, Ga., made the eight-hour haul to Rome from Ohio’s Atomic Speedway also, but for Clanton, Rome was actually only about 45 miles out of the way. … Most of the race’s nine cautions were for competitor changing flat tires. …  Kyle Bronson broke a valve spring before hot laps and drove the backup car of fellow Floridian Blake Spencer the rest of the night. Bronson took a provisional to start the main event and finished 20th. … Bloomquist, Richards, Overton and polesitter Earl Pearson Jr. each stopped to change tires at least once. … Mason Zeigler’s night ended on lap 22 with apparent engine trouble.