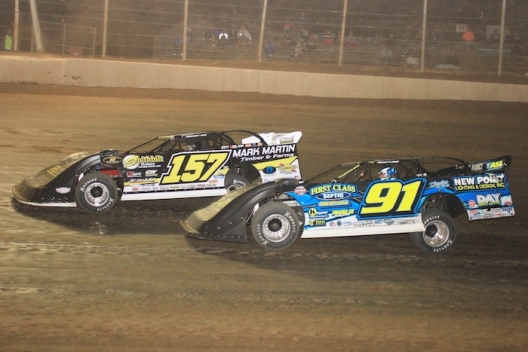 “This is awesome,” Erb said in victory lane. “I don’t know if it’s just the end of the year and we know if we tear something up we don’t have to race the rest of the year. I can drive like that every night. But a lot of times it doesn’t pay off. This was an awesome race from my point of view. I’m super, super excited.”

Charging from the 13th starting spot, Erb moved into second on lap 21, sliding ahead of race leader Brandon Sheppard of New Berlin, Ill., to briefly lead lap 23. Falling back one circuit later, Erb lost another position to Marlar on a mid-race restart. But when Sheppard slipped over the berm on lap 40, the third-running Erb shot past, keeping pace with Marlar, who inherited the lead.

As the frontrunners worked their way through late-race lapped traffic, Erb continued his charge around the high side, taking advantage of Marlar’s last-lap miscue in turn two. The pair raced side-by-side down the backstretch, with Erb sliding ahead out of turns three and four to edge out Marlar at the checkered flag.

“I was kicking myself for picking the outside on that restart,” Erb said. “(Marlar) saw what I was doing there and he really picked up and passed (Sheppard). I didn’t think I’d have another shot, especially when (Sheppard) got by me. I just committed to running that. I know (Sheppard) drove off the top and I about did two or three times. But I could stay up there and if I could hit it just right, I’d make up a ton of ground. (Marlar) jumped it right there at the very end.”

After leading laps 40-49, Marlar finished runner-up, with Sheppard running third for the second straight night. Eighth-starting Devin Moran of Dresden, Ohio, finished fourth, with Chase Junghans of Manhattan, Kan., advancing from the 15th starting spot to round out the top five.

Avoiding a lap-one pileup when Frank Heckenast Jr. of Frankfort, Ill., spun in front of the field, the third-starting Marlar battled Sheppard and polesitter Chris Madden of Gray Court, S.C., in the early running. Shooting ahead of Sheppard when he slipped over the turn-two berm to assume the point on lap 40, Marlar fell to Erb in the final turn, coming up just one spot short at the checkers.

“All of us older guys, we look out for (Erb) and try to coach him and it looks like it’s biting us in the butt,” Marlar joked. “I’m happy for him. It was an awesome race there. … (Sheppard) got pushed over the berm there and I was trying to get by him without wrecking. It was really close when I turned under him. It was definitely a wild race.”

Charging from his 12th starting position, Sheppard spilt Madden and Marlar to grab the lead on lap 20. Briefly falling to Erb, Sheppard shot back to the front of the field on lap 24, holding a comfortable lead over the field when the final yellow flag waved on lap 30. But luck would not be on Sheppard’s side, as the Rocket house car driver nearly slipped off the track with just 10 circuits remaining, closing the weekend doubleheader with a pair of third-place finishes.

“I had a really good race car there,” Sheppard said. “I gave that one away for sure. I went in there and hit the hole wrong getting into (turn) one and my right-front tire was already starting to give up on me. I hit that hole wrong gettin into one and pushed and I hit that little bit of wall there at the end and got over the berm. Luckily we were able to get back on the track and only lost two spots. We were right there with them at the end, so we know our car was really good.”

There’s no doubt it was an unforgettable weekend for Erb, who scored his first career World of Outlaws victory in Friday’s opener. Saturday’s win increased his weekend earnings to $18,000.

“Our car’s been good all year,” Erb said. “I used to make a lot of bonehead moves and I still do. I about gave it away. (Marlar) could have drove by me right there coming out of four. I just can’t thank everyone that helps me enough. It takes a lot of money to go up and down the road. It’s been a different year for me. … I haven’t been home in four and a half months and I’m about to relocate. So it means a lot for everybody that actually does care about what I’m doing.”

Notes: Erb scored his eighth victory of the 2018 season. …Polesitter Chris Madden led the first 19 laps. … The race was slowed by three cautions. ... The first yellow flag waved on lap one when Frank Heckenast Jr. spun on the backstretch. … Shane Clanton slowed on the backstretch to draw a caution on lap 28. … A yellow flag flew on lap 30 when Duane Chamberlain folded his nose under, slowing in turn two.