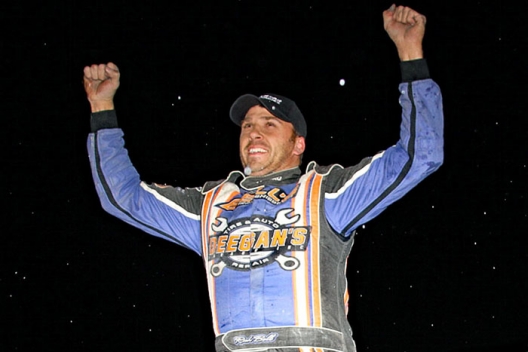 Jim DenHamer
Rich Bell celebrates his career-high $6,000 payday at Berlin.
What won the race: Rich Bell of Sheffield, Ill., overtook Jeep Van Wormer on a restart with three laps remaining Saturday for a $6,000 victory in the American Ethanol Late Model Tour finale at Berlin Raceway. In a rain-plagued race, the sixth-starting Bell denied Van Wormer a sweep of three straight Saturdays of tour action on Berlin's dirt-covered asphalt.
Quotable: "It was starting to come in good there before that caution, and then I thought we were done (as raindrops fell), so I was kinda down about that," winner Rich Bell said. "Man, when we took off green, I knew we had something good. I just can't thank all my sponsors and my family (enough) for all they do for me. I couldn't do it without 'em."
Key notes: Bell made an outside move on a lap-48 restart, going around Nick Kurtz and leader Jeep Van Wormer in one fell swoop. ... Bell has three career Ethanol Tour victories; the previous wins came in 2016 at Mount Pleasant and Thunderbird. ... Brandon Thirlby's fifth-place finish was good enough to wrap up the Ethanol tour championship. ... The 50-lap feature was run through off and on rain and there was a 40-minute delay with 22 laps remaining. ... Jeep Van Wormer took the lead from polesitter and early leader Mike Spatola on the 16th lap; Spatola retired four laps later. ... Ten cars completed 50 laps.
On the move: Rich Neiser of Fruitport, Mich., started 10th and finished fifth.
Winner's sponsors: Bell's No. 21B is sponsored by Deegan's Garagage, Hunderman & Sons Redi Mix, Pylman Power, Masterpiece Transportation, Busses and More, Laurie and Kevin Glieden, Starved Rock Wood Products, Readus and Dorothy Quickle, and Fastlane Graphics.
Points chase: Brandon Thirlby (754) of Traverse City, Mich., wrapped up the Ethanol Tour title.
Car count: 22
Heat race winners: Dona Marcoullier, Kevin Reeve, Travis Stemler
Editor's note: Results and race details are unofficial.