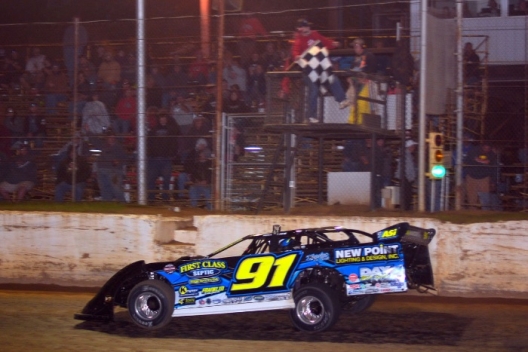 Overtaking race-long leader Devin Moran of Dresden, Ohio, on lap 35 of 40, the 21-year-old Erb led the final six circuits to win the opening night of Atomic Speedway’s Outlaw Invasion, earning an $8,000 payday in his first career World of Outlaws victory.

“I wasn’t a very happy guy most of the day,” Erb said in victory lane. “I knocked a nose off hot lapping. I didn’t expect it to race near as good as it did. The holes definitely gave it character. I know it was exciting from where I’m at. I’ve worked long and hard to win one of these. I won a Lucas race two weeks ago, so hopefully this is a sign of things to come. I’m beyond ecstatic.”

Charging from the 17th starting spot, Erb powered to third on a mid-race restart, setting his sights on Moran when a yellow flag waved on lap 31. Closing the gap between himself and the race leader when the race went back green, Erb slid ahead in turns one and two to assume the point on the 35th circuit, leading the remaining distance to score his seventh victory of the 2018 season.

“I broke something there about lap 20,” Erb said. “It don’t steer at all. It actually helped me because I wouldn’t hit them wholes so hard. It made me slow down because I was kind of scared to run in too high and knock the wall down. I saw (Brandon Sheppard) went to the back and it really had me worried. Once I got to (Devin) Moran I realized how good we were.”

After leading the first 34 laps, Moran settled for this third consecutive runner-up finish in World of Outlaws action. Recovering from a lap-15 flat tire, Brandon Sheppard of New Berlin, Ill., rallied from the tail of the field to run third, with seventh-starting Mike Marlar of Winfield, Tenn., improving three spots to finish fourth. Chris Ferguson of Mount Holly, N.C., rounded out the top five. Jason Jameson of Lawrenceburg, Ind., rallied from 22nd to second but fell from contention with a lap-26 flat tire.

Starting on the pole, Moran shot to the front of the field at the drop of the green flag, holding a comfortable lead as he navigated early lapped traffic. Unchallenged through the first half of the event, late-race restarts slowed his pace out front, ultimately leading to his demise. While he was hoping to back up last year’s victory, Moran was still happy for his fellow racer’s success.

“It was definitely frustrating, all them restarts,” Moran said after the race. “I felt like we were good on restarts but we struggled a couple times. I knew I had a comfortable lead. Man, it was a bummer. I think we’ve had too many seconds in a row now. But congrats to Tyler. He’s been staying at the shop a lot this year. It’s awesome to see him get his first Outlaw win, especially where I got my first win.”

Along with his flat tire, Sheppard was struck by a piece of debris during green-flag action, bloodying his lip and forcing him to make a mid-race helmet switch under a caution. A podium finish was no easy feat. But the Rocket Chassis house car driver got the job done.

“I had a really good car there,” Sheppard said. “I had a flat tire that put me behind. I don’t remember if I got hit before I got a flat or after I got a flat. … I was coming up through there and coming off (turn) four, somebody knocked up a big chuck of mud in the holes and it just busted by helmet. My lip hurts more than anything. It’s just a flesh wound. It’ll be alright. Overall, it was a lot of fun. We came from the back after we had a flat and had a really good race car.”

Notes: Feature cars took the track around 11:45 p.m. …The first yellow flag waved on lap four when Shane Clanton slowed off the pace after getting into the turn-four wall. ... Brandon Sheppard slowed on the backstretch with a right-rear flat to draw a caution on lap 15. … A yellow flag flew on lap 16 when Kody Evans slowed with a right-rear flat. Steve Casebolt drew another caution on the ensuing restart. … Austyn Mills spun in turn three to draw a lap-23 caution. … After the lap-26 yellow for Jason Jameson's flat, another caution fell on the ensuing restart for a turn-four tangle involving Devin Gilpin, Brent Larson and Eddie Carrier Jr. … Larson slowed on the backstretch to draw a lap-31 caution. … The final yellow flag flew on lap 36 when Jameson slowed in the top of turn two.