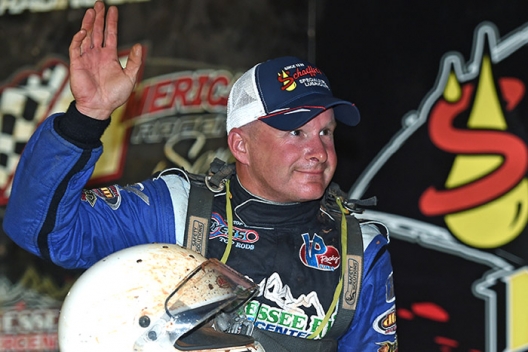 BRASSTOWN, N.C. — Even during seasons when things aren’t going his way, Casey Roberts can usually count on finding success at Tri-County Racetrack.

And so it was Friday at the western North Carolina oval as the Toccoa, Ga., driver dominated the second half of the Tar Heel 50 for a $10,000 Schaeffer's Southern Nationals Bonus Series victory in front of jam-packed crowd.

Taking the lead on lap 23 when race-long leader Dale McDowell slowed and headed pitside with a flat tire, Roberts rolled to victory in the 15th annual event promoted by Ray Cook and sponsored by FK Rod Ends. The track paid out its biggest purse in history.

“We’ve just had a lot of rainouts and a lot of bad luck, man, and it’s just been one of them years where we just can’t find no luck, but tonight everything worked out,” said Roberts, who earned his second victory for Tennessee-based Blount Motorsports. “I hate that happened to Dale there. We were having a good race there and it was going to be exciting there, for sure, to race him for the win. He’s a class act and I hate to see that happen to him there.”

Ross Bailes of Clover, S.C., made a late high-side charge to finish second in his Benji-Cranford No. 87 while Michael Brown of Pageland, S.C., drove the Billy Hicks-owned No. 79 to a third-place finish in his debut at Tri-County. Kenny Collins of Colbert, Ga., and Scott Bloomquist of Mooresburg, Tenn., rounded out the top five in one of five five-figure paydays on the Cook-promoted tour.

Roberts, who joined the Blount operation for the 2018 season but didn’t earn his first victory for the team until earlier this month, hounded McDowell in the first half of the race and wasn’t challenged after the fellow Georgian fell from contention.

“We definitely needed it,” Robert told Cook in victory lane. “I just can’t thank these guys here behind me (enough) for sticking with me and giving me an opportunity to race for them. It’s been a long year, but we’re trying to get a rhythm going here so hopefully we’ve kind of got better. I know this place has been so good to me. I appreciate you guys having us up here.”

Bailes, who started inside the sixth row, was languishing outside the top five in the first half of the race but found the high groove to his liking late in the race, storming to the second spot.

“We’re tickled to death. This track is amazing,” Bailes said. “I’ve been here twice and both times it’s been this racy. I was running the top but not up high enough, and I finally slid in there too far and hit the cushion, and once I felt that, it was on.”

The race was slowed by several cautions, the first one when former Tri-County winner Brandon Overton slowed in turn four on the ninth lap and retired.

Home-track driver David Payne spun between turns three and four for a mid-race caution, and was part of another yellow on the restart in a tangle with McDowell, who retired thereafter.

Johnny Cloer Jr. pulled up lame in turn four just past the halfway point and Levi Hicks slowed for a yellow in the second half of the race.

Notes: Roberts won Sept. 7 at Oglethorpe Speedway Park near Savannah, Ga., on the Southern All Star Racing Series. … He was third in March’s SNBS visit to Tri-County. … The track added four sets of portable grandstands that were filled along with the track’s existing bleachers. … The Tar Heel 50 is actually 53 laps. … Track and series promoter Ray Cook handled the victory lane interviews. … Fourth-place finisher Kenny Collins survived a backstretch scrape when he was pinched into the guardrail in the second half of the race. … David Payne started on the rear after mechanical issues before the race starter. ... Roberts also earned $1,000 for winning the T.J. Farver Quick Six Dash. ... Jamie Oliver scratched from the feature. ... Jacky Jones Automotive Group was the presenting sponsor.