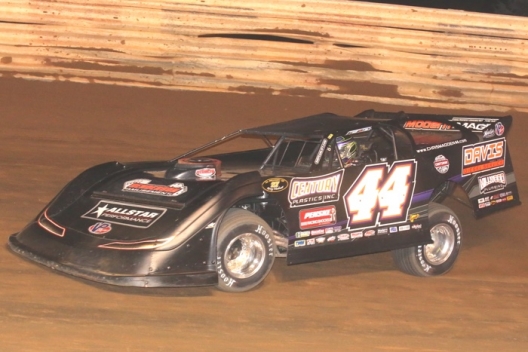 SELINSGROVE, Pa. (Sept. 22) — Chris Madden might not have been quite 100 percent physically on Saturday night at Selinsgrove Speedway, but his Barry Wright Race Car sure was.

With the 43-year-old driver from Gray Court, S.C., still recovering from a bout with pneumonia that forced him to visit a doctor earlier in the week, a flawless vehicle helped him roll to a dominant flag-to-flag victory in the half-mile fairgrounds oval’s 50-lap World of Outlaws Craftsman Late Model Series-sanctioned National Open.

“We definitely had a heck of a race car tonight on this big place,” Madden said after earning $10,000 for his eighth WoO triumph of 2018.

There was simply no catching Madden, who vaulted off the outside of the front at the initial green to grab the lead from polesitter Shane Clanton of Zebulon, Ga., and never looked back. After a potential threat in Brandon Sheppard of New Berlin, Ill., saw his march from eighth to second end on lap 22 in a cloud of engine smoke before he could mount a bid for the lead, Madden maintained a steady edge of at least a half-straightaway over his closest pursuer for the remainder of the distance.

Devin Moran of Dresden, Ohio, chased Madden for the final 28 circuits but never offered a challenge. Racing just three days before his 24th birthday, Moran couldn’t keep pace with Madden following a lap-48 restart and settled for a runner-up finish in his Tye Twarog-owned XR1 Rocket car, 1.976 seconds behind the victory.

Mike Marlar of Winfield, Tenn., challenged Moran on the green-white-checkered run that concluded the feature but finished third in Ronnie Delk’s XR1 Rocket, less than three-tenths of a second behind his young WoO rival. The performance cost Marlar six points in the tight battle for the WoO championship, leaving him 28 points in arrears of Madden with five races left on the national tour’s 2018 schedule.

Seventh-starter Rick Eckert of York, Pa., finished fourth after overtaking Coleby Frye of Dover, Pa., for fifth on lap 33 and moving up one spot position when fourth-place Tyler Erb of New Waverly, Texas, slowed on lap 48 due to a blown right-rear tire. Multi-time Selinsgrove champion Jeff Rine of Danville, Pa., who won last year’s WoO event at his longtime home track, placed fifth after winning a B-main and starting 17th.

Madden entered the event after being “under the weather for about a week-and-a-half with pneumonia” and relying on his Barry Wright-led crew to prepare his equipment, but he had plenty of confidence when he pulled through Selinsgrove’s gate. He finished second in his first-ever appearance at the track last year and was anxious to return.

Selinsgrove, of course, has a sprawling layout that finely fits Madden’s style.

“Just an awesome, big ‘ol racetrack here,” Madden said. “It’s an awesome place. I was a little worried about it to start with tonight, but they went out there and kind of rolled that top down some before those consies and before the feature so it didn’t get top-dominant. I felt like we had three lanes out there that we could run.”

Madden did receive the briefest of challenges from Clanton and Moran — the two drivers momentarily nosed underneath Madden in turns one and two following restarts on laps 14 (Clanton) and 16 (Moran) — but the eventual winner easily swatted them away.

“I never seen ‘em or heard ‘em,” Madden said. “I just kind of drove my race. I didn’t get into lapped traffic too many times … it got a little sketchy there a time or two still, but other than that, everything went smooth.”

The victory inched Madden ever closer to his first career WoO title and the $100,000 check that goes with it. He’s not taking anything for granted, however; he noted the winning races is still “the key,” but he faces an uphill climb to catch Marlar in Sunday night’s 50-lap feature at Outlaw Speedway in Dundee, N.Y., which was postponed by rain on Friday night, so the points battle is far from over.

“The 157’s on the pole tomorrow and we’re starting 10th, so we need to at least manage to get through there and try to win the race,” Madden said of Marlar. “We definitely don’t want to give up a whole bunch of points there tomorrow night with only four races left (after Outlaw).”

Moran conceded that Madden was in a class of his own, leaving him satisfied with a runner-up finish.

“He was really good,” Moran said of Madden. “Sheppard was really good too (B-Shepp overtook Moran for second on lap 18) … we really probably should’ve finished third, but misfortunes for them guys (Sheppard’s Rocket Chassis house car team) was a bummer that benefitted us.

“We didn’t have the car quite right tonight so there was nothing we could do (with Madden),” he added. “We’ll put it in our notes and hopefully we’ll be better when we come back.”

Marlar, 40, started and finished third, but he slipped as far back as fifth before spending the final 32 laps racing behind Moran.

“It was my first trip here and I was out early all night,” Marlar said. “I was in the first group (for qualifying) and I was in the first heat, and usually when you’re somewhere you’ve never been you’d kind of rather be in the fourth heat. By then the track’s slowed down a little bit and you can see what your car needs, but all night I was out there when the track was the fastest conditions, and really, for the feature, I didn’t adjust right.

“I didn’t really know what I needed and took a guess at it and I had ‘er just a little too free leaving the corners. A couple times Devin got in a position where maybe I could get by him, but I had hardly enough drive off to get him.”

Marlar looked on the bright side, though: he did set a new track record with his overall fastest lap in time trials.

“We still had a good showing,” Marlar said, “and we went around there faster than anybody ever has, so that’s good.”

The first two yellow periods came on lap 14, first for Dylan Yoder of Selinsgrove, Pa., slowing and then Brent Larson of Lake Elmo, Minn., spinning between turns one and two on the restart.

A critical caution period followed on lap 16 when Clanton slowed with a flat left-front tire that was cut in a turn-four scrape with Moran one circuit earlier as they battled for second place. Clanton slipped to fourth before pulling up lame to draw a caution; he pitted and returned to finish 12th.

Then, on lap 22, Sheppard’s blue No. 1 suddenly fell off the pace on the homestretch, engulfed in thick white smoke due to terminal engine trouble. He slowed to bring out a caution flag and was pushed into the pit area as the 22nd-place finisher, dealing a potentially killer blow to his hopes of repeating as WoO champion as he fell 74 points behind Madden.

Erb triggered the final caution flag on lap 48 when he run from the 10th starting spot to fourth place was dive-bombed by a blown right-rear tire. He pitted and came back to finish 15th.

Notes: Madden registered his 22nd career win on the WoO circuit. … Coleby Frye felt fortunate to salvage a sixth-place finish after his Larry Baer-owned car sustained right-front suspension damage on lap 33 when he ran out of racing room off turn four while battling for fifth with Eckert and clipped the outside guardrail. … Jason Covert of York Haven, Pa., recovered from a flat right-front tire that knocked him from a transfer spot in his heat to win a B-main, but he retired early from the feature and was credited with a 21st-place finish. … Making his first career WoO A-main start, Randy Christine Jr. of Manchester, Pa., was the last driver on the lead lap in 16th place. … Matt Cosner of Ridgeley, W.Va., scratched from competition after his car was felled by a broken engine lifter during hot laps. … Justin Weaver of Williamsport, Md., had a rough debut in the Coleman No. 72, failing to qualify after breaking a water pump during hot laps and then blowing a tire in his heat race. … Cars throughout the pit area sported decals remembering central Pennsylvania 410 sprint car star Greg Hodnett, who was killed two days earlier in a crash at BAPS Motor Speedway in Newberrytown, Pa. The feature’s four-wide pace lap was also extended an additional circuit so the pole position could be left open in a missing man formation to honor Hodnett.