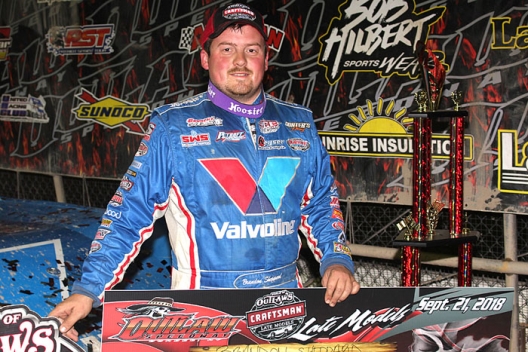 Bouncing back from what could have been a championship-crushing mechanical malfunction the previous night, the 25-year-old star from New Berlin, Ill., seized control for good from Mike Marlar of Winfield, Tenn., on lap 37 after several lead-swapping circuits and marched on to capture Sunday evening’s postponed 50-lap World of Outlaws Craftsman Late Model Series feature at Outlaw Speedway.

Sheppard tallied his series-leading 12th win of 2018 came after he broke an engine in a thick cloud of smoke running second on Saturday night at Selinsgrove (Pa.) Speedway, dropping him 74 points behind race winner Chris Madden of Gray Court, S.C. But the $10,000 triumph, combined with Madden’s mechanical trouble on lap eight that resulted in an 19th-place finish, brought Sheppard back within 40 points of new points leader Marlar, who ceded second place in the race to Devin Moran of Dresden, Ohio, coming to the white flag but used his third-place finish to move atop the standings by four markers over Madden with four events remaining.

Shane Clanton of Zebulon, Ga., who started from the outside pole and led laps 3-9, settled for a fourth-place finish. Tyler Erb of New Waverly, Texas, advanced from the 10th starting spot to place fifth, a position he finally reached on lap 45 with a successful slider on Chase Junghans of Manhattan, Kan.

The dramatic change in the WoO landscape in just a 24-hour period gave Sheppard renewed hope of defending his series title, a prospect that seemed to be on life-support as he traveled north to Outlaw to complete a racing program that was postponed after all qualifying was completed on Friday night.

Sheppard knows he still needs some breaks to go his way in the season-ending doubleheaders on Sept. 28-29 at Atomic Speedway in Alma, Ohio, and Nov. 1-3 at The Dirt Track at Charlotte in Concord, N.C., but at least he still has a chance — and considering the strength of his team and equipment, he’s confident he has a comeback in him.

“Every time we think we get close (in the standings), something happens to us and we fall back,” Sheppard said in victory lane. “At this point, all we’re worried about is getting wins and keeping this Rocket 1 machine up front. It’s been really fast, we’ve had a really good car all year. We’ve just had a little bit of bad luck.”

Sheppard, who started fifth, did experience a scare on lap 15 when he made contact in turn two with the lapped car driven by Michael Smith while running second. But despite sustaining damage to his car’s right-side bodywork, he chugged on and grabbed the lead for the first time shortly thereafter, overtaking Marlar to assume command on lap 20.

The most frenetic stretch of the A-main came following a lap-33 restart when Sheppard exchanged the top spot with Marlar for four consecutive laps. Marlar got rolling when the green flag returned and nosed ahead to lead laps 34 and 36, but Sheppard wasn’t headed again after shooting ahead on the 37th circuit.

Sticking to the inside lane around the third-mile oval proved to be a winning strategy for Sheppard, who pulled away following a final caution period on lap 40 to defeat the soon-to-be 24-year-old Moran by 2.4 seconds.

“The racetrack was a lot of fun to drive,” said Sheppard, who was victorious in his first-ever visit to the high-banked track in New York’s Finger Lake region that regularly headlines big-block modifieds. “It was pretty bottom-dominant for me for the most part. That’s where I felt the most comfortable, but I could move out there a little bit and pass lapped cars. That bottom just had a good little mud ring that helped us get by a few of them guys.”

Moran battled forward from the seventh starting spot in his Tye Twarog-owned XR1 Rocket car to record his second runner-up finish in as many nights, but he never had an opportunity to mount a challenge on Sheppard because he didn’t reach second place until sliding by Marlar off turn four heading toward the white flag.

Another $5,000 bridesmaid run sat well with Moran, who enjoyed the tour’s stop at Outlaw.

“This was actually one of the best tracks we’ve been to all year,” said Moran, who is fourth in the WoO points standings. “It cleaned up a little bit, and man, we could race all over that thing.

“Mikey (Marlar) and Sheppard were side-by-side (after the lap-33 restart) and I was right there. I couldn’t really do anything because that middle was so slick so I was just trying maintain, trying to get by Mikey, trying to get by Brandon. It was a lot of fun.

“There was a lot of traction up there on the top and that middle was super, super slick, so if you could get to the traction it was a whole lot faster,” he added. “I wish I could’ve got by Mikey a little sooner and seen if I could’ve given Brandon anything, but congrats to him and Rocket 1.”

Marlar, 40, commented afterward that his primary obstacle in his post-restart battle with Sheppard was the performance of his tires.

“I went on a little different tire combination I guess,” said Marlar, who started from the pole and led laps 1-2 and 10-19 before pacing single circuits while tussling with Sheppard later. “I didn’t realize it that until I was out there. I would be good for a little while and then I’d fade. I hung on there and it worked out (for a third).”

More importantly, Marlar’s podium finish in his Ronnie Delk-owned XR1 Rocket car gave him the WoO points lead because Madden, who started ninth, had his night sidetracked by a broken ball-joint that forced him to the pit area during a lap-eight caution period. Madden returned with 10 laps remaining after making repairs and picked up two positions in the finishing order but had to relinquish the points lead to Marlar.

Marlar kept a nonchalant outlook on the tense chase for the $100,000 crown to come, however.

“It’s come down here and we’re all racing hard,” Marlar said. “It’s a fun and cool thing to be a part of.”

Notes: Sheppard earned his 36th career WoO triumph and recorded his 19th overall win of 2018. … The feature was highlighted by seven lead changes among three drivers and caution flags on laps eight, 33 (Doug Eck slowing) and 40 (Brent Larson’s spin). … At 7:45 p.m. on Friday, with a severe thunderstorm approaching the speedway, track officials asked fans to clear the grandstands and take shelter and teams to do the same in the pit area. After the program was put in a holding pattern for just over an hour, the heavy rain that fell prompted officials to reschedule the 50-lap A-main for Sunday. ... Three of the 24 drivers scheduled to start the A-main after Friday’s postponement did not return on Sunday, including sixth-starter Jason Covert. Other no-shows were Chad Ruhlman and Larry Baer. … Clanton registered his first fast-time honor of the 2018 WoO season in Friday's qualifying.