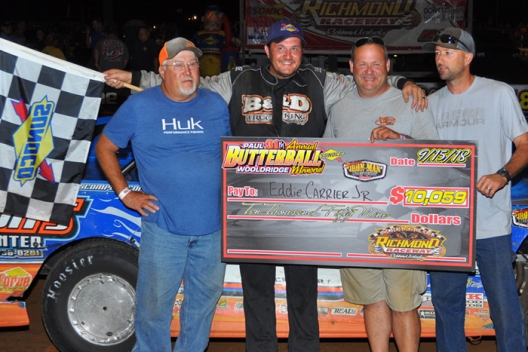 RICHMOND, Ky. — When Eddie Carrier Jr. realized he had a capable car Saturday evening at Richmond Raceway, the 47-year-old driver from Salt Rock, W.Va., was determined to park his Jake Keaton-owned ride in victory lane.

After all, not only was the Kentucky native winless at Richmond, he’d also fallen short in the track’s premier Sunoco Race Fuels Paul “Butterball” Wooldridge Memorial.

“I had to have this race,” Carrier said of the 31st annual event honoring one of the track’s most beloved drivers.

The sixth-starting Carrier took second from polesitter Billy Moyer Jr. on the 19th lap, stalked leader Victor Lee through the middle stages, then rubbed past the leader on lap 46 en route to his 59-lap victory at the quarter-mile oval south of Lexington.

Fighting back tears in victory lane, Carrier let out a guttural scream of relief while soaking in the satisfying victory on the Schaeffer’s Iron-Man Championship Series that paid $10,059 in purse money and another $550 in lap money.

“I’ve been coming here a lot of years and racing here and never won a race here, but whew, I really wanted this race,” Carrier said. “I’ve always wanted to win this Butterball, because I watched that man race here for years. And then to get my first win ever here, and for it to be the Butterball, I think I’m going to quit coming.”

Carrier took the checkers a half-straightaway ahead of Danville, Ky.’s Lee while Zack Dohm of Cross Lanes, W.Va., improved 10 positions to finish third. Jason Jameson of Lawrenceburg, Ind., was fourth in his Kentucky-based Rattliff Racing ride and Moyer, of Batesville, Ark., was fifth.

Carrier could barely contain his emotion in capturing one of Kentucky’s most recognizable Dirt Late Model events.

“I always like to come to Kentucky and race. It’s been good to me. I can’t lie. Even when I moved to West Virginia, it seemed like when I came back to Kentucky it was good to me,” Carrier said. “I’d just like to thank everybody that still believed in me and supported me. I might be getting old, but I think I can still get it done.”

Carrier worked the low groove past the halfway point to get underneath Lee exiting turn four. The frontrunners came together at the top of the frontstretch with Carrier’s car slightly out of shape, but he edged away and kept Lee at bay the final 14 laps.

“I want to apologize to Victor Lee. I always race him clean, he always races me clean. I got under him down there and we got together and I felt him,” Carrier said. “I tried to get away from him — he’s younger, he’s got more years than I do left — so I had to get this one. But I just want to apologize for him because I always try to race clean and (want) everybody to respect me as a clean, hard racer.

“Starting sixth, I didn’t know if we’d have it. But when they throwed the green and I was running third coming off (turn) two (on the first lap), I was like, ‘I think I got a piece.’ Then I got by Billy (Moyer) Jr. in lapped traffic. I kind of had to rough him up a little bit, but I think he understands. Then when I got to Victor, it seemed like Mikey Marlar — I want to thank him for showing me that bottom (groove).

“He started getting under me when I was running second, and on that last restart, I felt like I was better on the top on restarts, but I knew I needed to get down here and I knew Victor hadn’t found it yet. I thought if I could sneak under there and get to him, I’d have a shot at it.”

Lee started outside the front row and led 45 laps — most of if comfortably — but his high groove was no match for Carrier’s lower line during the critical final stages. Lee took his best shot at getting alongside Carrier again with three laps remaining, but when he slipped up into the guardrail between turns three and four, Carrier opened up breathing room that virtually clinched the victory.

“Man, we had an awesome race car again tonight. I’m not making excuses there, but I lost some brake pressure there,” Lee said. “The pedal started getting a little soft on me about lap 23. Man, I just kind of blocked that out and started driving the wheels off of it.

“The cautions there took me out out my rhythm (but) it was an awesome race car. I mean, this thing, I could drive about anywhere. I probably went a little softer than some of these guys on tires. I kind of took a gamble, but I thought if I could get out front and ride we’d be OK.”

Lee, a two-time winner of the race known simply as “The Butterball,” joked that he “let (Carrier) win one so he could say he won it,” but more seriously added congratulations to the fellow Kentucky native. “I kept looking at that (score) board. Fifty-nine laps around here is a long ways.”

Dohm never ran among the leaders and made a late flurry to finish third, assistant by the third-running Marlar’s departure with battery problems with five laps remaining.

“We went a little different tire choice than anybody — I think all three of us (on the podium) are a little bit different — but mine was just definitely coming in the longer we ran,” Dohm said. “I was kind mad. I looked up and saw there was only 19 laps left and I was still back there around 10th. I was like, ‘Good Lord!’ I don’t know.

“But this Swartz Race Car handled awesome. Congrats to Victor and Eddie. Eddie’s probably been one of my favorite racers since I started coming around and watching. He’s an awesome guy, so I’m glad to see him having such a good year.”

Notes: The race was a makeup of an Aug. 18 rainout. … Engine woes made Carrier's appearance at Richmond doubtful until just a few days before the track's biggest event. … Runner-up Victor Lee drove his James Barber-owned car to an Iron-Man Series victory the previous night at Lake Cumberland Speedway in Burnside, Ky. … Third-place finisher Zack Dohm was impressed when he checked out the grandstands after the race. “Every time I’ve ever been here it seems like it’s sold out. That’s pretty awesome,” he said. “It’s pretty cool to run good in front of all these people.”