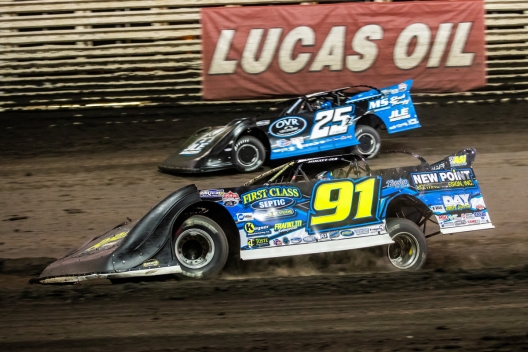 Slipping ahead of fellow front-row starter Mason Zeigler of Chalk Hill, Pa., on lap 17 of 25, Erb led the remaining distance to earn a $7,000 payday in the opening night of the 15th annual Lucas Oil Late Model Knoxville Nationals.

“I feel like I’ve been racing forever and it’s really not that long,” Erb said in victory lane. “But this is the sweetest feeling I’ve ever felt in my life.”

After an early battle with fourth-starting Chad Simpson of Mount Vernon, Iowa, Erb began closing the gap between himself and Zeigler, nearly getting into the turn-two wall when he slipped over the berm while attempting to pass for the lead on lap 10.

Regaining his composure, Erb reeled in Zeigler once again. The pair raced side-by-side in turns one and two and again in three and four, with Zeigler slipping over the cushion to relinquish his lead on lap 17. Pulling away in the final laps, Erb notched his sixth victory of 2018, his first since March.

“I was pretty good there,” Erb said. “I could keep up with him in the bottom if I didn’t hit that hole. They told me to go to the top. I was just waiting and waiting and waiting and once he jumped it, I figured that might have been my only shot. I sailed right off in there, got on two wheels. But words can’t even describe what I’m feeling right now. This is the most awesome thing that’s ever happened in my whole life.”

Pearson apologized for making contact with Simpson as the pair battled for position on the last circuit.

“That’s all my fault there,” Pearson said. “Me and Chad’s good friends and I miscalculated there on the slide job and hit the black and slid up in front of him. My apologies to him and I’m glad it didn’t take both of us out. I don’t drive that way. It’s a major miscalculation on my part.

“We wasn’t bad there. We just had to ride around the top. We wasn’t no good on the bottom. The caution, that definitely helped us starting on the outside.”

Simpson, a former Knoxville Nationals preliminary winner, was pleased to come away with a podium finish in the opening night of his home-state’s crown jewel weekend.

“We’ve got a really good race car,” Simpson said. “I think early in the race there when I was trying to take the lead and stuff, I think I used my right-rear tire up way too much. There late in the race I was just kind of wheel-spinning with it. It’s all shredded up pretty good. But it’s a good night for us, good finish. Third place is still good.”

Notes: Erb picked up his sixth win of the 2018 season, his first since a March 24 Mississippi State Championship Challenge Series victory at Whynot Motorsports Park in Meridian, Miss. … Polesitter Mason Zeigler led the first 16 laps before falling back to finish 10th. … The race was slowed by three cautions. … The first yellow flag flew on lap three when Jeremiah Hurst slowed in the top of turn two. … A smoking Kyle Bronson fell off the pace in turn one to draw a caution on lap eight. … A yellow flag waved on lap 18 when Bobby Pierce slowed in turn two.

Rolling around the top side, outside polesitter Kyle Bronson took an early lead, as Brandon Sheppard and Shannon Babb battled for second. Sheppard and Babb raced door-to-door in the opening laps, with fourth-running Brandon Overton joining the battle on the fifth circuit. With the top four cars distancing themselves from the field, Bronson held a comfortable lead when he entered lapped traffic at the halfway point. As Babb and Sheppard continued to battle, the pair began closing in on Bronson in lapped traffic. Sheppard pulled ahead of Bronson to lead the final two laps and win the consolation, with Bronson running second. Babb ran third, with Overton taking the fourth and final transfer spot.

Charging around the outside, second-starting Jared Landers took an early lead, with Jonathan Davenport battling polesitter Morgan Bagley for second on the opening lap. Seventh-starting Chad Simpson was on the move in the early running, moving into third by the third circuit. Davenport began reeling Landers at the halfway mark, closing the gap to a car length on lap seven. Pulling away on the final lap, Landers won the heat, with Davenport finishing second. Simpson rounded out the podium in third.

Reeling in polesitter Gregg Satterlee in the opening laps, third-starting Brian Birkhofer pulled ahead down the backstretch to take the lead on the third circuit. Seventh-starting Shane Clanton joined frontrunners in the early running, battling sixth-starting Jimmy Owens for third on lap seven. Birkhofer stretched his lead late-race, with Satterlee losing second to Clanton on the 10th circuit. Birkhofer won the heat, with Clanton finishing second. Owens overtook Satterlee on the last lap to run third and take the final feature transfer spot.

Polesitter Rob Toland led the opening laps, with fifth-starting Bobby Pierce challenging for the lead on lap three. The pair crossed the line side-by-side on lap five, with the advantage going to Toland. Pierce took the lead one circuit later, with Tyler Erb and Scott Bloomquist advancing from sixth and eighth respectively to run second and third. Erb and Bloomquist raced door-to-door on lap nine, with Bloomquist sliding ahead out of turn four to take second one lap later. Pierce held off a charging Bloomquist to win the heat race, with Erb rounding out the podium in third.

Polesitter Dave Eckrich charged to the lead at the drop of the green flag, with a yellow flag waving on the first lap when Austin Rettig spun in turn two, making contact with Chris Spieker. Eckrich held a comfortable lead when the race went back green, as Frank Heckenast Jr. charged from the sixth starting spot to run in second on lap five. Rolling around the top side, Pearson was also on the move at the halfway mark, advancing five spots to run third on lap seven. Pearson’s charged continued late-race, with the Dirt Million driver overtaking second-running Heceknast on lap 10. The pair raced side-by-side, with Heckenast reclaiming the spot one circuit later. Eckrich won the heat, with Heckenast and Pearson rounding out the podium.

Polesitter Jimmy Mars edged ahead of fellow front-row starter Chase Junghans to lead the opening lap, with fifth-starting Billy Moyer overtaking Junghans for second one circuit later. Junghans reclaimed the second-place spot on lap four, as eighth-starting Don O’Neal challenged Moyer for third. With Mars continuing to show the way out front, Moyer shot ahead of Junghans down the backstretch to retake second on lap seven, slowing off the pace on the frontstretch to draw a caution one circuit later. Powering ahead of Mars out of turn four, Junghans led the final two laps to win the heat. Sixth-starting Chris Simpson finished second, with Mars falling back to third.

With the front-row starters racing side-by-side down the backstretch, outside polesitter Jesse Stovall shot ahead out of turn four to take an early lead. With the top-two cars distancing themselves from the field in the opening laps, it was Mason Zeigler on the move early, slipping past Tim McCreadie to reel in the frontrunners at the halfway mark. Stovall began stretching his lead on the eighth circuit, as a smoking Hurst lost momentum. Stovall won the heat, with Hurst holding off Zeigler at the line to finish second. Zeilger took the third and final transfer spot over McCreadie.

The 15th annual Lucas Oil Late Model Knoxville Nationals presented by Casey’s General Stores kicks off with ideal weather: skies are partly sunny and high temperatures hit the mid-80s. The forecast calls for almost identical conditions on Friday and Saturday. … A 57-car field is signed in for competition, but there is one driver who is very noticeably missing: Mike Marlar of Winfield, Tenn., who won the last two Knoxville Nationals finales. Marlar decided to skip the weekend after a crash during last Thursday night’s World 100 preliminary program at Eldora Speedway in Rossburg, Ohio, left his 2-week-old Longhorn car needing a new front clip; he didn’t want to enter his XR1 Rocket machine because it is earmarked for duty in his World of Outlaws Craftsman Late Model Series championship battle stretch run. … Former Knoxville Nationals champion Jared Landers of Batesville, Ark., is entered in a brand-new Larry Moring-owned Black Diamond car that features several updates. He sat in the vehicle for the first time this afternoon to get comfortable in the cockpit. … Mike Mataragas of DeKalb, Ill., is making his first-ever visit to Knoxville with his XR1 Rocket mount. “Everybody talks about how great it is,” he said of the half-mile oval, “so we had to come check it out.” … Another first-time Knoxville competitor is Austin Rettig of Sikeston, Mo. … Brian Birkhofer of Muscatine, Iowa, is continuing his emergence from retirement in Jason Rauen’s Dirty 30 Black Diamond car, entering the Knoxville Nationals for the first time since he dramatically won the race’s 2014 edition after announcing he had decided to walk away from the sport. … Two weeks removed from a career-high $50,000 triumph in the Hillbilly 100, Brandon Overton of Evans, Ga., is in Knoxville’s pit area with Billy Franklin’s No. 76. It’s his first trip to the famed track since he ran the 2014 Nationals in a Troy Baird-owned car. … Lucas Oil Series technical director Steve Francis — a former Nationals winner now retired from driving — had his recent 51st birthday celebrated at the series trailer, where he was presented a cake of cupcakes. … Scott James of Bright, Ind., is in the pit area ready for competition on his 47th birthday. He repaired his Dolhun Racing Rocket after it was damaged in a qualifying accident last Thursday at Eldora. … Veteran Wisconsin engine builder Bill Schlieper arrived at Knoxville with his right arm tightly wrapped in a sling after he underwent surgery to repair his torn biceps. His suffered the injury while lifting an engine in his shop and is facing a 4-month recovery. … Hudson O’Neal of Martinsville, Ind., who underwent season-ending surgery on his left shoulder on Aug. 15, is in the pit area with his arm no longer in a sling. The just-turned 18-year-old said he is anxiously awaiting the opportunity to serve as the pit reporter for next week’s DirtonDirt.com pay-per-view broadcast of the Jackson 100 at Brownstown (Ind.) Speedway. ... Only Saturday night's 100-lap feature offers Lucas Oil Series points.

Mike Marlar of Winfield, Tenn., the two-time and defending Knoxville Nationals champion, will not be on hand for the weekend’s crown jewel event. Josh Richards of Shinnston, W.Va., the winner of last year’s opener, will be among the field.

Thursday’s program will include hot laps, time trials, heat races (with an eight-car inversion), consolations and the 25-lap main event. Drivers will earn points based on their performances over the first two nights of action, which will set the lineups for Saturday’s consolations and the 100-lap finale.

Friday’s program will be identical to Thursday’s. Drivers will use their best points night — not combined points — to see where they stand for Saturday’s alphabet soup of features, which are topped by the $40,000-to-win main event. Twenty-four drivers will be locked directly into Saturday night’s headliner at the conclusion of Friday’s program, with the remainder positioned in Saturday’s D- (if necessary), C- and B-Mains. DirtonDirt.com is offering live coverage of Thursday and Friday's prelims.