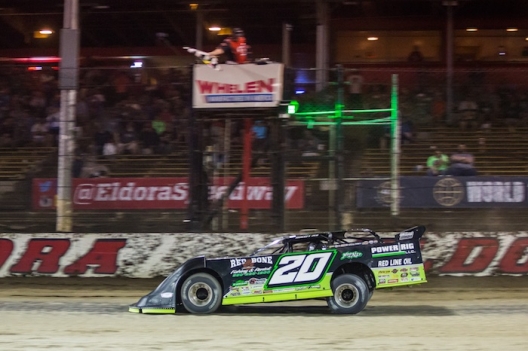 ROSSBURG, Ohio (Sept. 6) — Jimmy Owens has led some of this season’s biggest events. But the three-time Lucas Oil Late Model Dirt Series champion has frequently experienced bad luck, coming up short in what could have been a collection of high-paying victories.

“It seems like every time we get in the top five and it gets close to the end, something goes haywire,” said Owens, who waited out a long rain delay and visited victory lane just before 4 a.m. “My crew chief’s digging, my sponsors, they keep digging, and giving us stuff to race with. I’ve just gotta thank Leon Ramirez and Ramirez Motorsports.”

Running second in his heat race and redrawing to start on the pole of the 25-lap main event, Owens controlled the entire race, stretching his lead to nearly a half straightaway when the first yellow flag waved on lap 15. The two-time World 100 winner scored his first Eldora victory since the winning a prelim in the 2014 running of the crown jewel event.

“We had a good car,” Owens said. “I could really hit that middle (groove) real good. I wanted to stay in the middle, but the feature before, them guys were running up top, and that hole in the middle of (turns) one and two looked treacherous. And then there towards the end, I don’t know if we have a right-rear (tire) going down or what, but it got to where it was a-hopping doing into the corner there. I jumped the cushion that one time and I was like ‘Uh-oh!’ I said let’s just get away from the top and get back down to the middle.”

Overtaking Brian Shirley of Chatham, Ill., on the lap-15 restart, Birkhofer finished second, with Zack Dohm of Cross Lanes, W.Va., charging from 12th to post a career-best third-place finish at the famed half-mile oval. After running as high as second, Shirley finished fourth, with eighth-starting Tim McCreadie of Watertown, N.Y., rounding out the top five.

“I’m just glad to get back to second,” Birkhofer said. “If you start second and run worse, it always make you feel a little (bad). We’re close. I’m a little rusty yet. I’ve gotta work on my neck muscles a little bit more.

“I thought I might have a little run on him before that last caution, and then … it is Jimmy Owens, so he’ll get up on the wheel when he needs to.”

Birkhofer, a two-time World 100 winner, returns to Eldora this weekend for the first time since 2014. It was just a couple of weeks later that the Iowa driver announced he would be stepping away from the sport, departing after his Knoxville Late Model Nationals victory.

“I can’t ask for more,” Birkhofer said. “We’ve qualified well, won our heat, and run second on the preliminary night. It gives us a good start for tomorrow night. It’s fun to be back and see all the fans.”

Dohm, who finished seventh in last year’s World 100, continues to make gains at the Big E.

“I can only imagine how many times (the announcers) said ‘Zack Dohm digging on the bottom,’” Dohm said. “I don’t know what it is about this place. It seems like I run better here than we do anywhere else. That’s a good problem to have. We’ve just go our own little deal we do to the car. It ain’t no secret: it goes around the bottom real good here, and if I’ve gotta get up on the cushion, I’d pop a wheelie. I think we’ve got too much traction.

“I can’t thank everybody enough. We ain’t where we want to be just yet, but we’re getting there. This is my best run here. Before this was a fourth, now we’ve got a third. We’ve got two more nights to better it, hopefully.”

Notes: Owens is a two-time World 100 winner with his most recent globe coming in 2011; he also previously won a World 100 prelim in 2014. … The race was slowed by two cautions. … The first yellow flag waved on lap 15 when Jonathan Rowan slowed in turns one and two, collecting Kent Robinson. … Frank Heckenast Jr. slowed with a flat tire to draw a caution on lap 20. … Michael Page didn't make the call for staging because of engine problems before lining up for the feature.

Charging around the outside, outside polesitter Doug Drown led the opening lap, with Michael Page and Jason Jameson battling for third in the early running. As the race reached the halfway mark, the top two cars distanced themselves from the field, with second-running Austin Smith reeling in the race leader. A yellow flag waved on lap nine for debris on the racetrack. Splitting the front row, Page took the lead on the restart, with Drown slipping back to second. Page won the heat, with Drown edging out Smith to run second and transfer to the main event.

Polesitter Chris Ferguson stretched his lead in the early running, with Tyler Carpenter sliding ahead of outside poleistter Donald McIntosh to take second on the opening lap. With the leaders maintaining their positions, it was Chris Simpson on the move at the halfway point, improving from eighth to run in third. Holding a straightaway lead at the checkers, Ferguson won the consolation. Carpenter pulled away from Simpson in the final laps to finish second and transfer to the feature.

Kicking off his retiring car owner Bud Brinkmann’s final World 100 weekend in fine fashion, Chad Simpson of Mt. Vernon, Iowa, led every lap of the first heat. His lone scare came when he approached the lapped Brett Miller in turn three on the final lap. “Them lapped cars, I could see them out there so I kind of knew I had to plan it (to pass them),” he said. … Shannon Babb of Moweaqua, Ill., was scheduled to start third in Heat 1 but didn’t report for the green flag. The reason? Confusion over which heat he was in resulted in him not being ready when the first prelim hit the track. … Brian Birkhofer of Muscatine, Iowa, was feeling the effects of racing on the heavy, fast Eldora oval after winning the second heat. “The car’s pretty good. It’s better than I am,” said Birkhofer, who is driving Jason Rauen’s machine in his first Eldora appearance since 2014. “I’m out of shape. We’ve raced a little this year, but I’m trying to my neck muscles back.” … Sporting a throwback scene honoring his father, Robbie Hensley of Walton, Ky., was ecstatic after capturing the third heat. “We left a little bit on the table in qualifying,” he said. “I went down to my Penske (Shocks) guy and he made everything right for me. This car was awesome.” … Brian Shirley of Chatham, Ill., dominated the entire distance en route to winning the fourth heat as he seeks to rebound from two consecutive weeks of misfortune. Engine trouble sent him home early from the Aug 24-25 Dirt Million at Mansfield (Ohio) Motor Speedway and left him a DNQ for last Friday night’s Scheffler Memorial at Beaver Dam (Wis.) Speedway. … Darrell Lanigan of Union, Ky., won the fifth heat, but he wasn’t exactly smiling afterward. “I drew a 10 (starting spot for the even feature) so we got a lot of work to do tonight,” he said after the program’s final heat ended at 2:01 a.m. ... For Billy Moyer Jr. of Batesville, Ark., tangling with Chris Ferguson of Mt. Holly, N.C., in turn one on the opening lap of the first heat was frustrating enough. But several circuits later he experienced more trouble; a rock knocked the plug off the side of his engine’s oil pan, forcing him to the pit area. … Scott James of Bright, Ind., scratched from the fourth heat because his machine wasn’t yet repaired after he cracked the turn-three wall during qualifying. “I tried to go in wide open and it pushed,” he said. “I hope we didn’t mess the car up too much because it’s been so good since we fixed it after the North-South (100 last month).”

Polesitter Darrell Lanigan shot to the lead at the drop of the green flag, with Freddie Carpenter, Jimmy Mars and Earl Pearson Jr. running three-wide down the backstretch in a tight battle for second. A yellow flag waved on the first lap when Joey Moriarty spun in the bottom of turns one and two. Lanigan held his lead on the restart, with Mars closing the gap between himself and the race leader on the fourth circuit. It was a three-car battle for the lead on the sixth lap, with Lanigan maintaining the advantage over Pearson. Lanigan outran Pearson to win the heat, with Mars and Carpenter grabbing the other transfer spots.

Rolling around the outside, second-starting Brian Shirley took an early lead, with Jonathan Davenport charging from fifth to challenge Tim McCreadie for second on the second lap. Along with Davenport, it was Michael Chilton on the move early, advancing from the seventh starting spot to run in fourth at the halfway mark. As Shirley distanced himself from the field late-race, Davenport continued to challenge second-running McCreadie, unable to complete the pass. Shirley won the heat, with McCreadie and Davenport rounding out the podium. Chilton ran fourth to transfer to the feature.

Polesitter Robby Hensley led the opening lap, as third-starting Donald McIntosh slipped under Frank Heckenast Jr. in turns three and four to take second. Hensley stretched his lead at the halfway point, with McIntosh and Heckenast running side-by-side for second until Heckenast pulled away on the sixth lap. Hensley won the head, with Heckenast running second. Sixth-starting Brandon Overton finished third, with Ryan King edging out McIntosh for the fourth and final transfer spot.

Charging ahead of fellow front-row starter Kent Robinson out of turns one and two, outside poleistter Brian Birkhofer took an early lead. With the frontrunners racing single file at the halfway mark, Birkhofer stretched his lead. Fourth-starting Zack Dohm began closing in second-running Robinson in the final laps but was never able to make the pass for the position. Birkhofer took the checkered flag, with Robinson, Dohm and Shanon Buckingham all transferring to the main event.

A yellow flag waved on the opening lap when outside polesitter Billy Moyer Jr. and fourth-starting Chris Ferguson tangled in turn one. The race was brought to a complete restart, with Moyer and Ferguson returning at the tail of the field. Polesitter Chad Simpson shot to the front fo the field as the race went back green, holding a comfortable lead over Jimmy Owens at the halfway mark. Simpson won the heat, with Owens finishing second. Jonathan Rowan held off a charging Kyle Bronson to run third, with Bronson taking the fourth and final transfer spot.

Afternoon and then evening rain pushed back the start of the event. Time trials finally got rolling at 11:22 p.m. for a program destined to go into the wee hours. After rain from about 2:30-4:30 p.m., a drizzle began during hot laps shortly after 7 p.m. and turned into a light but steady rain 12 cars into time trials, forcing officials to red flag the qualifying session at 8 p.m. to wait out the weather. After the rain stopped pack trucks and then another session of hot laps whipped the track surface back into shape.