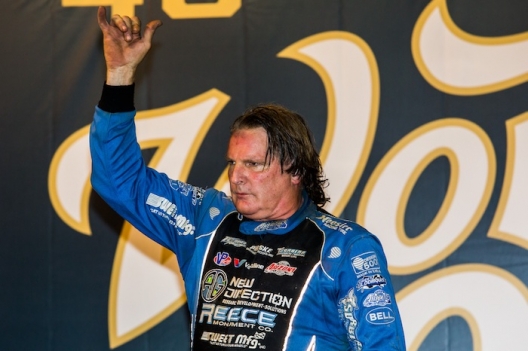 ROSSBURG, Ohio. — It was only a prelim. Still, Hall of Famers Scott Bloomquist and Billy Moyer of Batesville, Ark., showed just why their names are synonymous with success at famed Eldora Speedway.

Starting on the fourth row, Bloomquist of Mooresburg, Tenn., charged forward to win Thursday’s odd preliminary feature, opening the 48th annual World 100 weekend with a victory on a long day after action at the half-mile oval was delayed twice by rain showers.

Taking advantage of the polesitting Moyer’s bobble in turn two, Bloomquist zipped by to grab the lead on lap 20 and paced the final five circuits to win. It was a smooth night for the 54-year-old Bloomquist, who earned $10,000 for the victory.

“I was pretty sure we were going to get (Moyer),” Bloomquist said. “He ran a little harder tire than everybody out there, and it seemed to be working good for him, you know? … But I think our car was better. I’m just looking forward to Saturday.

“People think we like all that controversy, when actually I prefer a nice smooth weekend. Let’s hope we have one."

The late night — the green flag didn’t drop on the first feature until after 3 a.m. — didn’t seem to hamper the two Dirt Late Model titans.

Bloomquist, who won the first heat, had to work hard after being saddled with the seventh starting position following the redraw. While most opted to slide all the way up to the cushion, which was about two car widths off of the wall, Bloomquist instead dove to the bottom.

It paid dividends as he was up to sixth when fifth-running Mike Marlar tagged the wall in turn two to bring out the first caution. Bloomquist then went after another Eldora stalwart, O’Neal. Charging the corner in the low grove, Bloomquist grabbed the third spot from O’Neal on lap 10 and began to reel in Norris.

Four laps later he got the break he needed when Duane Chamberlain slowed with a flat tire and right side body damage to draw the second caution.

Bloomquist made quick work of Norris on the restart, getting by the young Pennsylvanian and setting his sights on the race-long leader. Moyer started from the pole and led comfortably until he jumped the cushion, giving Bloomquist the opening he needed.

Moyer said difficulties when a piece of his car’s nose fell to the track while he was running the cushion “definitely cost us the race.”

“Still, we’ll hold our head up. Second ain’t bad,” he added. “We’re still looking at the big picture here Saturday. We’re ready. Thanks to all the fans for hanging out until whatever time it is.”

Norris said he found himself a bit awestruck while racing two of the sport’s most recognizable stars. His third-place finish backed up his victory in a World of Outlaws preliminary feature at his home track, Lernerville Speedway, back in June.

“I learned a lot, but I was definitely fan-boying it pretty hard there,” said the 26-year-old Norris. “I’m like, ‘Wow, I’m racing with Billy Moyer and Bloomquist at Eldora.’ That’s what dreams are made of.

“I think I might’ve gotten a little excited there and got my stuff hot. I feel like I was pretty good, but they’re tough. We’re happy and it’s something to build off of.”

Taking advantage of a restart with two laps remaining, Devin Moran of Dresden, Ohio, used a slider in turn two to grab the lead from race-long leader Gordy Gundaker, Moran went on to win the second consolation in front of Duane Chamberlain and Jack Sullivan, as Gundaker slid all the way back to fourth. Powering into the lead from his outside front row starting spot, Gundaker led the opening lap and appeared to be on his way to a win until multiple cautions slowed his effort. The caution waved on lap four for Greg Roberson who slowed on the backstretch. A second caution appeared on lap 11 for Kody Evans and Cade Dillard, who got together in turn two. Second-running Ross Robinson slowed to bring out the third caution after suffering right front damage on a lap 11 restart.

Beating Jason Feger through turns one and two on a lap nine restart, Mason Zeigler of Chalk Hill, Pa., powered ahead to complete a flag-to-flag victory in the first consolation race. Zeigler beat Feger, the polesitter, by a second, while Feger nabbed the final transfer position after turning back an early charge from Dwight Falcon. Chase Junghans finished third and Forrest Trent was fourth. Falcon slowed on lap nine with a flat tire and a damaged right rear quarterpanel on lap nine ending the night for the young Louisiana drive and bunching the field with three laps remaining.

Scott Bloomquist of Mooresburg, Tenn., said he “didn’t qualify quite as well” as he would have liked, but his time-trial effort gave him the outside pole for the first heat and he took advantage of it to capture the race. “It took a lap or two to get some heat in the front tires … the car is good,” he related. … Cade Dillard of Robeline, La., experienced heartbreak in the first heat, blowing a right-rear tire while running third. The first-time Eldora entrant had crinkled his car’s right-rear bodywork on the opening circuit in a scrape with Bloomquist. … Chris Madden of Gray Court, S.C., didn’t sound too thrilled with his victory in the second heat. “We haven’t been any good since we’ve been here and we still aren’t any good,” he said. “We just started on the front row and managed to manhandle the thing to the win. The racetrack needs to slow down for us.” … Michael Norris of Sarver, Pa., parlayed an aggressive move to slide ahead of Dustin Nobbe on the race’s opening lap into a victory in the third heat. “I hope I left Dustin enough room there,” the Lernerville Speedway champion said. “But it’s Eldora … I thought I had him cleared so I went for it.” … Mike Marlar of Winfield, Tenn., overcame an inversion that started him fourth to win Heat 4. “I got a good start there,” said Marlar, who will also start fourth in the 25-lap even feature. “That was the key to the whole deal. That just made things way better in clean air (out front).” … Just days after winning the Baltes Classic at Eldora, Billy Moyer of Batesville, Ark., will start from the pole position in the odd feature after winning the fifth heat. “It felt decent,” the 60-year-old Hall of Famer said. “But everybody’s fighting those holes, so we’ll just have to stay on top of it.”

Surviving contact as the field raced to the green on the opening lap, polesitter Billy Moyer of Batesville, Ark., led all 10 laps to win the fifth heat. Dennis Erb Jr. fell in line in second to give chase. Don O’Neal took the second spot from Erb Jr. on lap five, but couldn’t catch Moyer, who won five five lengths. Jon Henry finished fourth to transfer to Thursday’s first feature. Joey Coulter slowed in turn four to bring out a caution on lap four.

Blasting into the lead from the fourth starting position, Mike Marlar of Winfield, Tenn., pulled ahead on the opening lap. Marlar had a comfortable lead on Ivedent Lloyd Jr. when Steve Casebolt slowed on lap two with a flat tire, bringing out the first caution. Restarting on the outside, Marlar pulled ahead again, this time in front of Tyler Erb, who took second from Lloyd on the restart. Marlar won easily, finishing 1.136 seconds in front of Erb, while Lloyd took third and Nick Hoffman finished fourth to take the final transfer spot.

Polesitter Michael Norris of Sarver, Pa., used a slider exiting turn four on the opening lap to grab the lead from Dustin Nobbe and pulled away to win the caution free third heat. The Pennsylvanian cruised to a 3.382-second victory over Nobbe. Nobbe jumped the cushion in turn two on lap five allowing Norris to skate away even further, but still managed to stay in front of third-running Bobby Pierce. Pierce settled for third, with 2008 World 100 winner Shane Clanton taking the final transfer spot. Devin Moran suffered some body damage to his right door and finished sixth.

Polesitter Chris Madden of Gray Court, S.C., jumped to a first-lap lead ahead of fellow front row starter Devin Gilpin and pulled away to win the second heat. Madden won by 1.421 seconds in front of third-starting Josh Richards who grabbed the second spot from Gilpin on lap two. Dale McDowell challenged Richards for the runner-up spot, but settled for third. Gilpin dropped all the way to fourth before turning back Chad Stapleton and Chase Junghans mid-race to take the final transfer spot.

Despite pushing high in turn two on the opening lap, four-time World 100 winner Scott Bloomquist of Mooresburg, Tenn., grabbed the lead over Cade Dillard as they completed the first circuit and raced out to a huge lead until a lap eight caution. Bloomquist restarted on the outside front row with two to go and immediately pulled away from Brandon Sheppard to win the evening’s first heat. Sheppard, who started fourth, finished second, 1.338 seconds behind the winner. Third-starting Greg Johnson finished third and Mike Spatola grabbed the fourth and final transfer spot after starting fifth. Dillard, who had right rear sheet metal damage from contact on lap one, shredded a right rear tire and brought out the lap-eight caution.

Afternoon and then evening rain pushed back the start of the event. Time trials finally got rolling at 11:22 p.m. for a program destined to go into the wee hours. After rain from about 2:30-4:30 p.m., a drizzle began during hot laps shortly after 7 p.m. and turned into a light but steady rain 12 cars into time trials, forcing officials to red flag the qualifying session at 8 p.m. to wait out the weather. After the rain stopped pack trucks and then another session of hot laps whipped the track surface back into shape.