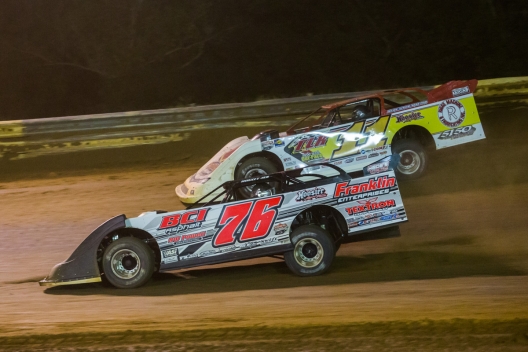 MIDDLEBOURNE, W.Va. (Sept. 2) — The last few weeks of racing haven’t been all that kind to Brandon Overton. But the 27-year-old Evans, Ga., driver earned a shot of redemption on Sunday night, scoring a career-richest $50,000 victory in Tyler County Speedway’s 50th annual Hillbilly 100.

“We had the worst two nights of racing I think I could have,” an emotional Overton said in victory lane. “Last week at Mansfield not making the race with all the circumstances … it’s miserable. We went home and ran regional a little bit and was doing good. We kind of got out here and was going to show everybody what we were made of and got beat down pretty quick.

“Different parts of the country, they just race a little different. The only way to figure it out is to stay out here and race. We was about to get lapped last night and everything and then came back tonight and won. I can’t thank Todd (Pruitt) and (Grant) Pearl and my fiancée and Billy Franklin and everybody that’s behind me (enough).”

Slipping under race-long leader Jared Hawkins of Fairmont, W.Va., out of turn two to assume the point on the 70th circuit, eighth-starting Overton led the remaining distance, pulling away in the final laps for his first career Hillbilly 100 victory and second Lucas Oil Late Model Dirt Series triumph of the 2018 season.

“I knew I had a good car, I was just trying to bide my time and not kill my tires trying to pass them,” Overton said. “One time I almost turned around and hit Gregg (Satterlee) in the left front. I didn’t mean to do that. It’s just tight racing. It’s a bullring. I love this place. I almost won my first Outlaw race here and Josh (Richards) passed me with a couple to go. So I feel like it owed me one.”

Leading the first 69 laps, Hawkins finished runner-up, while Mason Zeigler advanced from the 11th starting spot to run third. From running as high as second and challenging for the lead to nearly tangling with Josh Richards of Shinnston, W.Va., in the final laps, Jimmy Owens of Newport, Tenn., held on for a fourth-place finish, with Gregg Satterlee of Indiana, Pa., rounding out the top five.

“Early on, I tried to get out and see how the car felt and then just tried to maintain,” Hawkins said. “It felt like I was being easy on my stuff and trying to be there at the end. I guess I needed to move up. When he went by me, I thought maybe I got beat on tires. But he just got up on the wheel and got it done.”

“I’ve been racing here ever since I started,” Hawkins said. “If I was going to get one, this is where I wanted it. But it’s definitely a confidence booster and we’ve got some more racing this year.”

Zeigler, who currently leads the Lucas Oil Series Rookie of the Year title chase, didn’t join the battle up front until late-race. But the podium finish marked the weekend-best for the Pennsylvania driver, who finished 10th on Friday at Ponderosa Speedway in Junction City, Ky., and sixth on Saturday at Portsmouth (Ohio) Raceway Park.

“I wish we maybe could have started a little bit further up front,” Zeigler said. “I screwed up in qualifying. … Brandon (Overton) was really good. I think we maybe could have run second. I could run up on Jared (Hawkins) but once we got to him, I couldn’t really do nothing with him. He had a good car. We could pick them off back in the field there but these guys were a lot better than fourth on back. It would have been tough to get any better than where we were.”

Notes: Overton scored his fourth career Lucas Oil Series victory, his first since his Feb. 7 Georgia-Florida Speedweeks triumph at East Bay Raceway Park in Gibsonton, Fla. … Overton’s previous highest payday came in the 2017 Firecracker 100 at Lernerville Speedway in Sarver, Pa., where he earned $30,000. … The race was slowed by seven cautions, the final on lap 92 when Jimmy Owens and Josh Richards collided while battling for fourth.

Lap 92: Richards and Owens make contact in turn two while battling for fourth. Richards spins to collect Pearson and Bronson, while Owens never slows and is able to continue.

Lap 86: A yellow flag waves for Sheppard, who retires under the caution. Overton leads Hawkins, Mason Zeigler, Owens and Richards.

Lap 70: Edging ahead of Hawkins out of turn two, Overton takes the lead.

Lap 68: Rolling around the top side, Overton takes second, closing in on Hawkins.

Lap 59: Just as Owens was set to make the pass for the lead out of turn four, a yellow flag waves when Don O'Neal slows in the top of turn four. Ninth-running Bloomquist pits under the caution. Tim McCreadie also heads to the hot pit with mechanical issues. Hawkins leads Owens, Tyler Erb, Overton and Satterlee.

Lap 44: Tyler Carpenter falls off the pace in turn four to draw a caution. Hawkins leads Owens, Tyler Erb, Satterlee and Richards. Owens has been Hawkins's only serious challenger so far.

Lap 36: The first yellow flag waves on lap 36 when Kyle Thomas slows in turn two. Holding a comfortable lead in lapped traffic, Hawkins continues to show the way over Tyler Erb, Owens, Bloomquist and Satterlee. Starting 18th, Brandon Sheppard is up to ninth, while 20th-starting Jonathan Davenport has advanced to run 11th.

9:50 p.m.: Pre-race ceremonies are complete and drivers are given the call to start their engines. Cars start rolling out for pace laps.

9:32 p.m.: Feature cars roll on to the frontstretch for driver introductions.

With all of the Lucas Oil Series regulars qualifying for Sunday's Hillbilly 100 through prelims, two fast time provisionals were given out to Greg Oakes of Franklinville, N.Y., and Derek Doll of Greenwood, W.Va. … With Friday’s Hillbilly 50 winner Jacob Hawkins of Fairmont, W.Va., absent on Sunday, the race’s runner-up finisher Zack Dohm of Cross Lanes, W.Va., earned a spot in the starting lineup. … Kyle Thomas of Pennsboro, W.Va., was the other track provisional … Making their first-ever appearance at Tyler County, Ricky Thornton Jr. of Chandler, Ariz., and Bobby Pierce of Oakwood, Ill., qualified for the Hillbilly 100 for the first time. … Tyler Erb of New Waverly, Texas, Brandon Overton of Evans, Ga., and Kyle Bronson of Brandon, Fla., are among other drivers making their first-ever Hillbilly 100 start. Erb finished runner-up in Saturday’s unsanctioned Outhouse 50 at Tyler County. … Former Hillbilly 100 winners qualifying for Sunday’s feature include Scott Bloomquist of Mooresburg, Tenn., Jimmy Owens of Newport, Tenn., Don O’Neal of Martinsville, Ind., Earl Pearson Jr. of Jacksonville, Fla., and Jonathan Davenport of Blairsville, Ga.

Outside polesitter Brandon Sheppard edged ahead of fellow front-row starter Robbie Scott to take the lead, pulling away in the early laps. As the race neared the halfway mark, third-starting Davenport began reeling in second-running Scott to challenge for position. A yellow flag waved on lap eight when Derek Stefanick slowed on the backstretch. Sheppard held his lead on the restart, with Davenport overtaking Scott for second. With the top two cars distancing themselves from the field, Scott and Tim Dohm battle for the the final transfer spot in the final laps. Sheppard won the consolation, with Davenport running second. Scott finished third to transfer to the main event.

Rolling around the top side, Tim McCreadie took an early lead, with a yellow flag waving on the opening lap when Brian Baumberger and Ronnie Mayle collided on the frontstretch, with Baumberger spinning to a stop. Another yellow flag waved on the ensuing restart for a turn-two tangling involving Travis Brown, Dylan Bledsoe and Mayle and Baumberger. McCreadie maintained his lead as the race went back green, with Darrell Lanigan challenging Tyler Carpenter for the second-place spot. The pair raced side-by-side on lap eight, with Carpenter holding the advantage. Stretching his lead late-race, McCreadie won the consolation, with Carpenter and Lanigan rounding out the podium to transfer to the feature.

Polesitter Mike Benedum charged to the lead at the drop of the green flag, with Brandon Sheppard, Earl Pearson Jr., Josh Richards and Devin Moran taking it four-wide for third in turns three and four. A yellow flag waved on the first lap when Moran slowed in turn one, retiring to the pits under the caution. Benedum held his lead on the restart, with second-starting Brandon Overton and Richards in tow. As the top two cars distanced themselves from the field, Overton challenged Benedum for the lead on lap seven, coming up short. The pair raced side-by-side at the line on lap 10, with Benedum nosing ahead to hang on to his lead. Fighting of Overton, Benedum won the heat, with Overton, Richards and Pearson transferring to the feature.

Edging ahead of fellow front-row starter Kyle Bronson out of turn two on the first lap, polesitter Tyler Erb began stretching his lead in the early running. It was eighth-starting Jimmy Owens on the move at the halfway point, charging around the top to take third on lap seven. Continuing his run, Owens overtook Bronson for second one circuit later. A yellow flag waved on lap 12 when Derek Stefanick slowed in turn two. Holding off Owens, Tyler Erb won the heat, with Owens finishing a narrow second. Bronson ran third, with Dennis Erb Jr. finishing fourth to transfer to the feature.

Polesitter Scott Bloomquist took an early lead, with fellow front-row starter Bobby Pierce falling back to fourth on the second lap. Bloomquist stretched his lead to almost a full straightaway at the halfway point, as third-starting Chris Garnes maintained the second spot over Mason Zeigler and Pierce. Dominating the entire distance, Bloomquist won the heat, with Garnes, Zeigler and Pierce transferring to the main event.

Polesitter Jared Hawkins shot to the front of the field at the drop of the green flag, with a yellow flag waving on the first lap when outside polesitter Greg Oakes collided with Darrell Lanigan, spinning in turn four. Lanigan pitted under the caution with a flat tire, returning to the tail of the field. Another yellow flag waved on the ensuing restart when Dylan Bledsoe spun in turns one and two. Fourth-starting Gregg Satterlee began closing in on Hawkins as the race went back green, with the pair racing side-by-side on the fourth lap. With Hawkins maintaining his lead at the halfway mark, a tight battle ensued for the fourth-place spot between Travis Brown and Ricky Thornton Jr. Pulling away in the final laps, Hawkins won the heat, with Satterlee finishing second. Don O’Neal ran third, with Thornton taking the fourth and final transfer spot.

Lucas Oil Series points leader Jonathan Davenport of Blairsville, Ga., is the defending Hillbilly 100 winner, picking up a $25,000 payday at Tyler County before going on to score his second career World 100 victory last September. Other recent Hillbilly 100 winners on hand for Sunday’s event include Scott Bloomquist of Mooresburg, Tenn. (2016 and ’15), Don O’Neal of Martinsville, Ind. ('14), and Jimmy Owens of Newport, Tenn. ('13).

Home-state driver Eddie Carrier Jr. of Salt Rock was the winner of Friday’s series stop at Ponderosa Speedway in Junction City, Ky., while Brandon Sheppard of New Berlin, Ill., scored his fourth Lucas Oil victory of 2018 on Saturday at Portsmouth (Ohio) Raceway Park. Both drivers are among Sunday's field.

Sunday’s program includes hot laps, time trials, four heat races, two consolations and the 100-lap, $50,000-to-win main event. The top four cars from each heat will transfer to the feature, with the top three cars transferring from each consolation. Series and track provisionals will make up the final two rows of the feature lineup. Legends will also be in action.