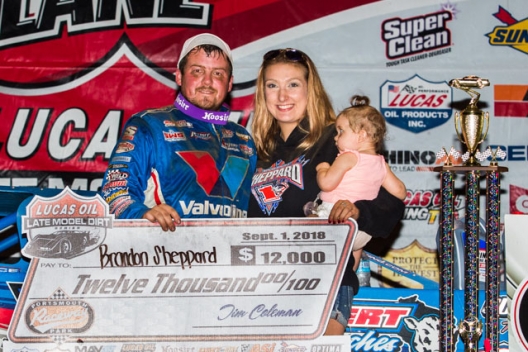 Sheppard flexed his muscle on a lap-12 restart when he vaulted from third to first place and dominated the remainder of the distance. He had little trouble pulling away from Josh Richards of Shinnston, W.Va. — Sheppard’s predecessor behind the wheel of the Rocket Chassis house car — following four restarts to secure his fourth Lucas Oil Series triumph of the season by a comfortable 2.331 seconds over the tour’s defending champion.

“This thing is awesome every time we come here,” Sheppard said. “I don’t know what it is about the place.”

Taking advantage of an off weekend in the World of Outlaws Craftsman Late Model Series schedule to challenge the Lucas Oil Series regulars, Sheppard looked right at home at Portsmouth. The track has, of course, treated him well in recent years; he won his first-ever crown jewel event at the track in 2013 when he captured the Dirt Track World Championship in a substitute role with the Rocket house car team and also captured a July Lucas Oil show in 2015 and the DTWC for a second time in ’16.

Sheppard’s performance had him eyeing a return to the track for the Oct. 19-20 DTWC that once again offers a $100,000 top prize.

“A hundred-thousand to win here later in the year … that was one of the reasons why we came here,” Sheppard said. “We didn’t have anywhere else to race either (over Labor Day weekend), but it’s definitely great to get here and get a little tuned up (for the DTWC).

“The track is probably not gonna have that big of a cushion at the Dirt Track (World Championship), but if it does it won’t bother me none.”

Sheppard started fourth — right alongside Richards, whose father, Mark, fields Sheppard’s iconic blue No. 1 machines — and ran in the position for the feature’s early laps. But he restarted third after a lap-12 caution for a multi-car tangle in turn two that collected the second-running Scott Bloomquist of Mooresburg, Tenn., who had started from the pole, and exploded to the front when the green flag flew, charging past Richards and grabbing the lead from race-long pacesetter Kyle Bronson of Brandon, Fla.

“I can’t say I wasn’t very good at the beginning of the race,” said Sheppard, who recorded his 10th career win on the Lucas Oil Series. “I didn’t really know what line I needed to be in and I was kind of moving around a little bit trying to figure it out. I knew I could restart really good on the bottom, and luckily Josh took the outside on that one (lap 12) restart and that allowed me to get a good run on him down the straightaway and then I think Kyle pushed in one and two and that allowed me to get the lead.

“After that I just had to find a smooth line that I could be consistent with and just make good laps.”

Richards, 30, slipped past Bronson for second on lap 14 and held the runner-up spot the rest of the way in his Best Performance Motorsports XR1 Rocket, but the winner of last October’s $100,000 DTWC at Portsmouth was never able to seriously threaten Sheppard.

“It was unfortunate that big crash off of two collected Scott and those guys,” Richards said of the lap-12 incident. “It was pretty sketchy over there, but luckily we were able to get through.

“We had a pretty good car,” he continued. “Brandon did a great job. He had the car to beat tonight and was up front, and I think we broke something in our right-front. I couldn’t quite keep it loaded to roll through the corner. Brandon was good at just keeping the car rolling right down through the center and I’d lose a little bit of time floating up the track.”

The 34-year-old Davenport drew close to Richards late in the distance but couldn’t push his Lance Landers Racing Longhorn car past his closest rival in the Lucas Oil points race.

“I finally got a run on Josh one time and I went in there and I couldn’t really see good enough, I couldn’t get to the cushion fast enough to get a run off the corner,” said Davenport, who left Portsmouth leading Richards by 175 points. “We had a decent points night going there so I didn’t want to jump the cushion and mess that up.

“We finally ran halfway decent here,” he added. “This place has been eluding me for a long time. I don’t know what it is. I just ain’t never been any good here. I think we might have some notes to go off and hopefully this parlays over to the Dirt Track World Championship.”

Five caution flags slowed the race, including the lap-12 incident that saw Bloomquist swept up in a tangle with the lapped cars driven by Don O’Neal of Martinsville, Ind., Shanon Buckingham of Morristown, Tenn., and Shannon Thornsberry of Martin, Ky. Bloomquist restarted at the rear of the field and salvaged a 12th-place finish.

Other cautions flew on lap 14 for Darrell Lanigan of Union, Ky., slowing on the homestretch with nose damage; lap 20 for Jimmy Owens of Newport, Tenn., slowing with a flat right-rear tire while running fourth; lap 30 when Earl Pearson Jr. of Jacksonville, Fla., spun while in a battle for fifth; and lap 33 for Bronson, whose once promising night came to an early end with a flat tire and other problems that resulted from damage his car sustained when he clipped O’Neal’s spinning machine in the lap-12 accident that doomed Bloomquist.

Notes: Bloomquist’s new-track-record lap of 13.840 seconds in time trials marked the first time a Dirt Late Model driver has ever broken into the 13-second bracket at Portsmouth. ... Jason Jameson of Lawrenceburg, Ind., who broke through  at Portsmouth in June to score his first career Lucas Oil Series victory, was never a factor. He pitted during the lap-20 caution period and retired after completing 38 laps, finishing 15th. … Don O’Neal used a provisional to start the A-main after his car’s nose was damaged during his heat race. … R.J. Conley of Wheelersburg, Ohio, rode out a wild series of flips for the second time in three weeks at Portsmouth. He bicycled into several rollovers between turns one and two on the opening lap of the fourth heat; he was shaken up and checked by EMTs as a precaution. … The Bob Miller Memorial honored the late racing sponsor and supporter from Leburn, Ky., whose businesses Miller Brothers Coal and Miller Brothers Construction adorned a number of cars through the years, including those driven by Bloomquist, Jack Boggs, Ronnie Johnson and Eddie Carrier Jr.