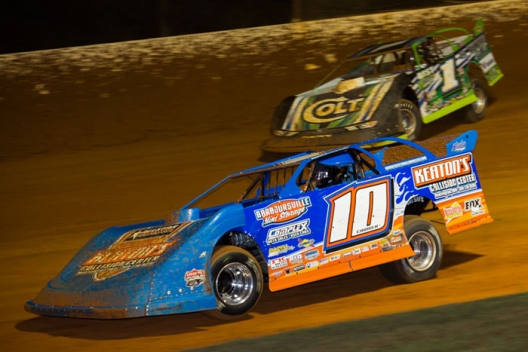 Carrier, who notched his 10th career series victory, was quick to express his gratitude in victory lane in front a record-setting crowd.

“Hallelujah,” Carrier said. “Thank the Lord for the rain. I don’t know if I could run 20 more laps like that or not. Look, I’ve got a left-rear flat.”

Starting outside the front row, Carrier shot to the front of the field at the drop of the green flag, falling to Pearson on lap six when the Dirt Million winner edged ahead at the line. Rolling around the top side to close the gap between himself and the race leader, Carrier nosed back ahead just as the rain started to pick up, scoring his third career John Bradshaw Memorial victory.

“When Earl (Pearson) got down on that bottom, it was kind of dirtying the top up on me,” Carrier said. “Under that (lap 19) caution, we had a little bit of rain then but nothing real bad. We could race in it. That top kind of cleaned off to where I could get off the corner a lot better. It seemed like I was spinning a little bit off the corner when they were running that bottom and it cleaned up. I just got it done.”

“Me and (Richards) was on a little bit softer tires than (Carrier) was, so we had to ride around the bottom there,” Pearson said. “We led it there for a while and Eddie was out there where he don’t usually run at. But he made it happen, so I’m happy for him and his dad and all of them guys. I hated the rain situation but we can’t control that. It was a good show.”

It was the lap-19 restart, brought on by a turn-two tangle involving Brandon Overton of Evans, Ga., and Tim McCreadie of Watertown, N.Y., that threw Richards a curveball, slowing his battle with the frontrunners.

“On that last restart, I knew the rain was coming and I didn’t know to choose the top or the bottom,” Richards said. “In hindsight, I probably should have chose the top. I knew Earl and I kind of gambled on tires a little bit and we got up through there. Then at that part we were just trying to ride and not get it hot. I thought we’d have a shot. Right before they had that last yellow, I was actually running them both back down and had a really good car.”

Despite the wet weather, it was still a special night for Carrier, who’s a native of nearby Burgin, Ky.

“We didn’t grow up far from here, about 20 minutes down the road,” Carrier said. “I’ve been coming here since I was a kid, watching my dad and (Russ) Petro race here a lot. All the guys was good around here. They used to have a playground right there behind the stands under the tower there. I grew up there. It’s a special place. To come in here and outrun these guys … it doesn’t matter if I’ve got 3,000 laps here. When them guys come in, you can’t take them lightly.”

Notes: Carrier scored his 10th career Lucas Oil Series victory, his first since the July, 3, 2017 event at Muskingum County Speedway in Zanesville, Ohio. … Carrier is a three-time John Bradshaw Memorial winner, with his previous victories coming in 2005 and 2010. … Sixteen cars completed 30 laps. ... The race was slowed by two cautions. ... A yellow flag waved on lap 19 for a turn-two tangle involving Tim McCreadie and Brandon Overton. ... The second caution fell on lap 30 for debris on the track; fifth-running Kyle Bronson retired under the yellow flag after shredding a tire. ... Ponderosa welcomed the Lucas Oil Series for the second time in tour history. ... Arriving to the track shortly after time trials, former series champion Scott Bloomquist failed to transfer to the night's main event through prelims. Per series rules, Lucas Oil regulars receive one excused tardy a season in which they can still use a provisional to start the feature. After he was tardy for the July 2 tour stop at Sharon (Ohio) Speedway, Bloomquist was ineligible for a series provisional at Ponderosa, where he won the previous series visit on Aug. 26, 2016.