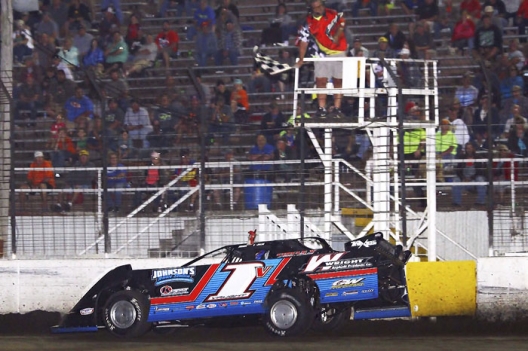 John Vass
Will Vaught takes the checkers at Lee County Speedway.
What won the race: Sixth-starting Will Vaught of Crane, Mo., used a restart following a lap-15 caution to wrestle the lead away from polesitter Tony Jackson Jr. and went on to lead the rest of the 40-lap MLRA main event for a $3,000 victory Friday at Lee County. Payton Looney advanced from ninth to finish second, while Chad Simpson moved from 11th to third.
Quotable: "The boys changed gears right before the feature and I think that was a lot of it on that restart (that gave him the lead). We got up off the corner and we got a good run into (turn) one,” winner Will Vaught said. “I knew we had to make something happen because if it we had went green flag I don't know if I would have ever been able to of passed him.”
Key notes: The victory was Vaught's fourth of the season and 11th of his career on the MLRA circuit. He has captured three of the last five series events ... Looney closed to a car length of Vaught in the waning laps but got no closer. … Tony Jackson Jr. had a flat shortly after giving up the lead. He pitted and returned to the track only to lose his car’s driveshaft six laps later. … Justin Zeitner earned his second top-five in a row. … Missing from the field was fifth-place points man and rookie contender Mitch McGrath, who stayed in his home state of Wisconsin to run the George and Russ Scheffler Memorial at Beaver Dam (Wis.) Raceway that honors his grandfather and uncle. ... Series action continues Saturday night at Lucas Oil Speedway with a $5,075-to-win event before moving to Monett (Mo.) Motor Speedway Sunday to close out the weekend.
On the move: Payton Looney of Republic, Mo., started ninth and finished second.
Winner's sponsors: Vaught's Rocket Chassis is sponsored by Johnson's Service Station, Wright Asphalt Products, Keyser Manufacturing, Integra Racing Shocks and GW Performance.
Points chase: Before Lee County, Chad Simpson (1,297) of Mount Vernon, Iowa, led Will Vaught (1,259), Tony Jackson Jr. (1,239), Payton Looney (1,130) and Mitch McGrath (1,117).
Car count: 20
Polesitter: Tony Jackson Jr.
Heat race winners: Tony Jackson Jr., Dave Eckrich, Matt Furman
Next series race: September 1, Lucas Oil Speedway (Wheatland, MO) $5,075
Editor's note: Results and race details are unofficial.