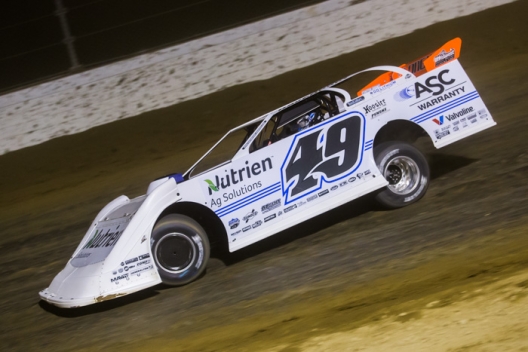 “We’re definitely going to sleep better knowing we’re locked in, so we don’t have to race our way in tomorrow,” Davenport said in victory lane. “Those heats are going to be tough. You’ve got to win your heat to get in or you go to the B-main. You could get in the wrong line on a restart, start on the pole and run second.

“We’re definitely going to rest easier knowing we are locked in. That’s just going to give us more time to overthink ourselves. I think I’ve got a good game plan of what we need to do. I’m going to discuss it with my guys over there and maybe we’ll make the right decisions and see if we can’t sweep this thing.”

Winning his heat race and redrawing to start on the pole of Friday’s second feature, Davenport charged to the front of the field at the drop of the green flag. Never seriously challenged for the lead, the 2018 Silver Dollar Nationals winner lead wire-to-wire to earn a $10,000 payday in his ninth Lucas Oil Series victory of the 2018 season.

“It felt pretty good there,” Davenport said. “This is a new car, only second race on it, so we’ve still got a little bit to tweak on it. It’s got a little bit different characteristics than my other one but I think I like them. It definitely turns a little better. So I think we can tighten it up better and be better yet in a 100 lapper.”

Using a late-race restart to his advantage, fifth-starting Ricky Weiss of Headingley, Manitoba, overtook Don O’Neal of Martinsville, Ind., for second in the final laps. O’Neal held off challenges from Devin Moran of Dresden, Ohio, to run third at the checkers, with Moran finishing fourth to grab the final transfer spot for Saturday’s 100-lapper.

“Our team’s just been digging,” said Weiss, who scored his richest career victory just two weeks ago in Florence Speedway’s Sunoco North-South 100. “I can’t think the boys enough that have been busting ass and working on this thing. It just seems to be paying off every time I say that.

“I was happy with fourth. There was a little bit of pressure because I was sitting on the bubble. Then when we got up to third it was a little more comfortable. Someone got into (Don) O’Neal a little bit there and I seen the door open up and got under him. But obviously didn’t want to make contact. (Jonathan) Davenport ran a good race. I really didn’t want to see that caution. I felt like we were coming pretty good there.”

As the frontrunners entered lapped traffic, second-running O’Neal closed the gap between himself and Davenport at the race’s halfway mark. But he eventually fell to Weiss with less than 10 laps remaining in the feature. He’ll hope to repeat his July 1 Lucas Oil Series victory at Mansfield on Saturday night.

“I just didn’t make a big enough arc getting into (turn) one on that last restart and it killed me in the middle of the corner, letting them guys get a run on me,” O’Neal said. “But other than that I’m pretty happy with the race car.”

Throwing everything he had at O’Neal in the final laps, Moran settled for a fourth-place finish at the checkered flag. But he joins the seven other drivers that are locked in to Saturday’s Dirt Million finale.

“A top four, I can sleep good tonight,” Moran said. “We know we’re in tomorrow. We weren’t horrible there. But we’ve definitely got to get better. We’ll just go back and put our thinking caps on and hopefully we can get tuned in for tomorrow.”

Notes: The first yellow flag waved on the first lap when Matt Irey spun on the frontstretch. … Jeep Van Wormer slowed with a flat right-rear tire to draw a caution on lap 23; Rick Eckert pitted with a flat tire under the caution. … After suffering mechanical issues in his own car during his heat race, Ricky Thornton Jr. climbed in Dan Angelicchio’s No. 14 to start the feature.

Polesitter Ryan Markham edged ahead of fellow front-row starter Eddie Carrier Jr. at the line to lead the first lap, with Carrier assuming the point one circuit later. Carrier began distancing himself from the field in the early running, as Jason Feger attempted to reel in second-running Markham. With Carrier holding nearly a full straightaway lead, a yellow flag waved on lap 10 when Ross Bailes slowed on the backstretch. Leading the final two circuits, Carrirer won the consolation, with Markahm holding off Feger to grab the second and final transfer spot.

Front-row starters Zack Dohm and Jared Landers raced side-by-side on the opening lap, with the advantage going to Landers. With Landers showing the way out front, third-starting Chis Ferguson slipped ahead of Dohm to take second on the second circuit. As Landers stretched his lead at the halfway mark, it was Jackie Boggs on the move, taking third from Dohm on lap six. Landers won the consolation, with Ferguson finishing second to transfer to the feature.

Polesitter Jonatahn Davenport powered to the front of the field on the opening lap, with third-starting Ricky Weiss slipping under Rick Eckert to take second on lap two. As Davenport stretched his lead at the halfway mark, a tight battle ensued between Gregg Satterlee and Eddie Carrier Jr. for the final transfer spot. With the top-two cars distancing themselves from the field, Davenport won the heat, with Weiss finishing runner-up. Eckert ran third, with Satterlee edging ahead of Carrier at the line to take the fourth and final transfer spot.

Polesitter Don O’Neal shot out to an early lead, with fellow front-row starter Ricky Thornton Jr. in tow. A yellow flag waved on lap four when second-running Thornton slowed on the backstretch, retiring to the infield. O’Neal maintained his lead on the restart, with Chub Frank and Zach McMillan battling for the final transfer spot. Holding a comfortable lead at the finish, O’Neal won the heat, with Shannon Babb running second. Frank and McMillan grabbed feature transfer spots.

Shooting ahead of fellow front-row starter Dale McDowell out of turn two, second-starting Brian Birkhofer took an early lead. As McDowell challenged Birkhofer up front in the early laps, third-running Jeep Van Wormer fought off a charging Chad Simpson. A yellow flag waved on lap five when Colton Flinner slowed off the pace. Birkhofer held his lead on the restart, with Jared Landers joining the battle for third. Birkhofer won the heat, with McDowell, Simpson and Van Wormer transferring to the main event.

Polesitter Devin Moran shot to the front of the field at the drop of the green flag, with a caution falling on the first lap when Steve Sabo came to a stop on the backstretch. Moran maintained his lead on the restart, with Dave Hess Jr. challenging Dennis Erb Jr. for second. As Moran stretched his lead at the halfway mark, Doug Drown battled Hess for third. Another yellow flag waved on lap six for debris on the racetrack. Moran won the heat, with Dennis Erb Jr. finishing second. Hess ran third, with Drown holding off Zack Dohm to finish fourth and transfer to the feature.

Devin Moran of Dresden, Ohio, was the quickest qualifier for Friday’s Second Duel, tripping the clock with a time of 16.954 seconds. Moran will start on the pole of the Second Duel’s first heat race, the night’s fifth heat overall. Other heat race polesitters will be Dale McDowell of Chickamauga, Ga., Don O’Neal of Martinsville, Ind., and Jonathan Davenport of Blairsville, Ga.

The semi-retired Brian Birkhofer of Muscatine, Iowa, is making another start in Jason Rauen’s Dirty 30 car, a brand-new Black Diamond machine after he had driven Rauen's Longhorn earlier this season. It’s possible he will add the upcoming World 100 and Knoxville Nationals to his schedule as well. … Jeep Van Wormer of Pinioning, Mich., is in competition for the first time since June’s Dream weekend at Eldora Speedway in Rossburg, Ohio. … Another driver ending an extended absence from action is Chris Ferguson of Mt. Holly, N.C., who last competed in the late June World of Outlaws doubleheader at Terre Haute (Ind.) Action Track and Federated Auto Parts Raceway at I-55 in Pevely, Mo. He is debuting a predominantly black Sweet-Bloomquist Race Car and is parked alongside Scott Bloomquist in the pit area. … Open-wheel modified ace Ricky Thornton Jr. of Chandler, Ariz., has his familiar No. 20RT on the doors of the SSI Motorsports car that normally carries Hudson O’Neal’s No. 71. Thornton is making his first start as a substitute for the teenage O’Neal, who is sidelined for the remainder of the season after undergoing left shoulder surgery on Aug. 15. … Zach McMillan made the long haul from Texas to compete at Mansfield. … Chad Simpson of Mt. Vernon, Iowa, skipped the Aug. 2-4 USA Nationals at Cedar Lake Speedway in New Richmond, Wis., so this weekend’s event marks his first action since a July 27 MLRA show at Lakeside Speedway in Kansas City, Kan.

The inaugural Dirt Million gets under way on Friday at Mansfield (Ohio) Motor Speedway with a pair of $10,000-to-win Lucas Oil Late Model Dirt Series events. The top four finishers from each of the two 30-lap features will be locked in to Saturday’s 100-lap main event.

With the event’s unique format, fans, sponsors and teams have helped grow Saturday’s crowd-funded feature purse through the purchase of tickets, camping reservations and pay-per-view packages. The winner’s share will pay more than $189,000, with the purse continuing to increase up until Saturday’s opening ceremonies.

Friday’s show will include two complete Lucas Oil Series events. The field will be split into First and Second Duels, with each program including hot laps, time trials, four eight-lap heat races and consolations and a 30-lap feature. The top four finishers from each heat race will transfer to their respective feature, with the top two cars redrawing for their feature starting spot. The top two finishers from each consolation will transfer to their respective main event, with Lucas Oil Series provisionals making up the final row of each feature lineup if needed.