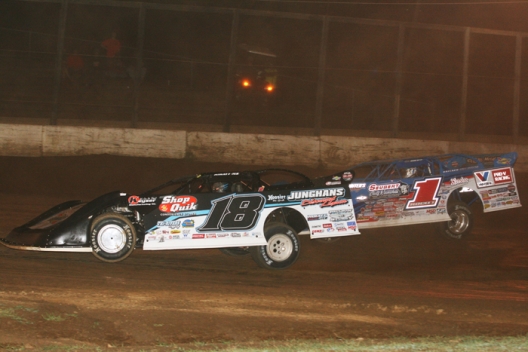 HAMMETT, Pa. (Aug. 19) — Chase Junghans earned his first World of Outlaws Craftsman Late Model Series victory in over three years. Brandon Sheppard made sure of it.

While Junghans led all but one circuit of Sunday night’s 50-lap feature at Eriez Speedway to snap a long, frustrating winless drought on the national tour, the 25-year-old driver from Manhattan, Kan., had to withstand a furious late-race challenge from New Berlin, Ill.’s Sheppard to secure the checkered flag.

Sheppard, 25, made a stirring charge forward from the 16th starting spot to grab the lead from Junghans on lap 37, but Junghans regained command the following circuit and made no mistakes the remainder of the distance to defeat the defending WoO champion and 11-time 2018 winner by 0.548 of a second for the race’s $10,000 top prize.

“Anytime you see that blue 1 car (Sheppard’s Rocket Chassis house car) behind you, you know it’s gonna be tough to beat him,” said Junghans, whose only previous WoO triumph came on June 26, 2015, in a Firecracker 100 preliminary feature at Lernerville Speedway in Sarver, Pa. “Luckily we got it done tonight.”

Junghans then let out a huge sigh of relief as he stood alongside WoO announcer Rick Eshelman in victory lane. All the on- and off-track struggles that followed his breakthrough 2015 victory — including his older brother Grant’s death in the spring of 2016 from a rare form of cancer and his decision to stop full-time WoO traveling from midway through the ’16 season and all of ’17 — were finally softened by a WoO celebration.

“This one’s been coming a long time,” Junghans said. “I’m definitely tickled to death. We’ve been really fast (in 2018) but we just got to time in good (in qualifying). It’s a lot easier when you start up front. We just need to work on timing in and staying up front. Luckily everything lined up tonight.”

WoO points leader Chris Madden of Gray Court, S.C., finished third, losing two points in the championship battle to Sheppard — the third-place driver in the standings who left Eriez 30 points behind Madden — but gaining two markers on fourth-place finisher Mike Marlar of Winfield, Tenn., whose deficit to Madden increased to 22 points after he advanced eight spots from his 12th starting position.

Boom Briggs of Bear Lake, Pa., completed the top five, placing fifth after earning overall fast-time honors in qualifying, winning a heat race and starting from the pole position in the feature.

Junghans took the race’s initial green flag from the outside pole and immediately shot his father Greg’s XR1 Rocket car ahead of Briggs to snatch the lead. The young racer from the country’s Heartland proceeded to pull away from the pack, maxing out at a healthy edge of just over 3 seconds on Madden just after the feature’s halfway point.

But after Sheppard’s rally brought him to second place with a lap-30 pass of Madden, Junghans’s advantage quickly began to evaporate. By lap 36 Sheppard was on Junghans’s back bumper and the next circuit he was scored the leader.

Junghans showed his grit, however, by taking the lead back from Sheppard on lap 38 while the pacesetters worked through slower traffic. Shortly thereafter, on lap 40, Mike Maresca of Potsdam, N.Y., slowed with a flat tire while running 10th to bring out a caution flag, providing Junghans a welcomed respite that ultimately helped him close out the race without having to deal with lapped cars.

“I used some of those guys as a blocker to try and zig-zag through ‘em, but the bottom (groove) got a little rough and you kind of had to bounce it right and land right to take back off,” Junghans said. “Luckily we had that late caution and my (crew) guys told me where to go. I don’t know if that’s where Sheppy was running or not, but luckily that all worked out and we’re here (as the winner).”

Sheppard stayed within striking distance of Junghans for the final 10 laps but never was able to mount a bid for the lead as strong as he did before the lap-40 caution flag. He settled for his second straight runner-up finish, duplicating his effort the previous night at Port Royal (Pa.) Speedway.

“He did a really good job,” Sheppard said of Junghans. “We’ve had a really fast race car all night long, it’s just … I didn’t really run the right line qualifying. I went out late and I kind of watched some of the earlier guys, the line that they ran, and it just wasn’t the right line. I made a bad call qualifying (and timed eighth-fastest in his group as a result). Then there in the heat race the track was really fast and it was pretty hard to pass (leading to a fourth-place finish and a starting spot deep in the feature’s field).”

Madden, meanwhile, couldn’t summon the speed to seriously contend for the win with his Barry Wright house car. He had to be satisfied with another consistent finish that moved him another race closer to the $100,000 WoO title.

“We hit those holes there pretty hard right at the start of the race and I think we killed something in the right front,” said Madden, who started fourth. “We faded right there a little bit. I thought we had a chance to get up there and race with Chase, but congratulations to them guys. They’re great people, love to race with ‘em. Good job to them guys.

“We’re very pleased with our night. We’ve been struggling in these conditions right here. We feel like we definitely made some headway tonight and we’ll keep working in that area and we’ll get it figured out.”

The big moment of Junghans’s memorable night came during the victory lane ceremonies when he was handed a pair of scissors and snipped some of the long, flowing hair his crew chief, Corey Richman, has been growing ever since Junghans’s last win over three years ago. Richman had pledged that he wouldn’t cut his hair until Junghans won again.

“I don’t know how much we’re gonna cut off,” Junghans said with a smile before going to work on Richman’s locks.

Just two caution flags slowed the feature. Prior to the lap-40 yellow flag for Maresca, a lap-two scramble in turn one eliminated Shane Clanton of Zebulon, Ga., Jared Miley of Pittsburgh, Pa., and David Breazeale of Four Corners, Miss.; Clanton's car suffered mechanical trouble when he bounced hard in a hole between turns one and two and he collected Miley and Breazeale.

Notes: Junghans had three top-five WoO finishes to his credit this season before emerging victorious: thirds on Feb. 14 at Volusia Speedway Park in Barberville, Fla., and June 15 at Ransomville (N.Y.) Speedway and a fourth in the 100-lap USA Nationals on Aug. 4 at Cedar Lake Speedway in New Richmond, Wis. … The checkered flag was actually the second of Junghans’s career at Eriez. He captured a weekly Super Late Model feature at the track on June 21, 2015. … Junghans’s triumph marked the seventh straight time Eriez’s WoO event has been won by a driving piloting a Rocket Chassis. … Non-qualifiers included Alex Ferree, Doug Eck and Chris Hackett. … The WoO tour will be idle for a month before beginning its seven-race stretch run on Sept. 21 at Outlaw Speedway in Dundee, N.Y.