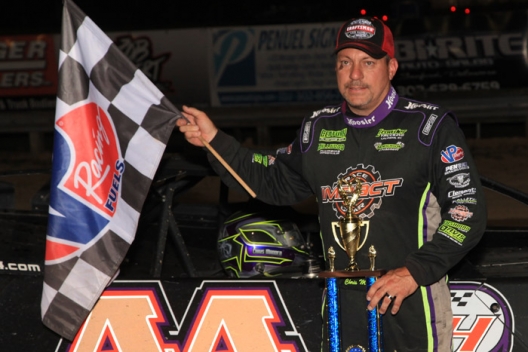 GEORGETOWN, Del. (Aug. 16) — Once Chris Madden outgunned polesitter Rick Eckert for the lead on the original start of Thursday’s Fulton Bank 40 at Georgetown Speedway, one thought was on his mind the rest of the way.

“I was just mainly focusing on me not giving the race away,” Madden said.

Madden, 43, of Gray Court, S.C., ultimately turned back several challenge from York, Pa.’s Eckert to pace every lap and capture the World of Outlaws Craftsman Late Model Series event’s $10,000 top prize, but the national tour’s points leader paid little heed to those threats. He was so confident in his Barry Wright-built machine’s speed that he felt only his own miscue could cost him the checkered flag.

“Nah, it wasn’t no big deal,” Madden said when asked about Eckert nosing inside him off turn two on laps 26 and 29. “Lapped traffic was just running in the infield and throwing some dirt out in front of me, so it had me loose.

“I don’t think it was as much about him being better than me,” he added. “It was just lapped traffic slowing me down, so it was a matter of me not screwing up and giving the race away and we didn’t. We done what we needed to do, so we got the ‘w’ tonight.”

Madden recorded his seventh WoO triumph of 2018, giving him a single-season career high on the series. It was his 21st career WoO victory, ranking him 10th all-time on the tour’s win list.

Eckert, 52, settled for a WoO season-best runner-up finish in his XR1 Rocket, 0.694 of a second behind Madden after being unable to mount a serious bid for the lead on the restart that followed the A-main’s only caution flag on lap 34.

Brandon Sheppard, 25, of New Berlin, Ill., started and finished third in the Rocket Chassis house car that was a bit too loose for him to deal with Madden and Eckert. Mike Marlar of Winfield, Tenn., placed fourth after grabbing the spot on lap 19 from Devin Moran of Dresden, Ohio, who went on to complete the top five one year after winning the inaugural WoO event at the sprawling half-mile oval in southern Delaware.

The first non-WoO regular in the final rundown was 23-year-old Amanda Whaley of Millsboro, Del., whose sixth-place finish from the 11th starting spot fell one position short of her fifth-place run in the 2016 WoO stop at Delaware International Speedway in Delmar that sits as the best A-main finish by a female driver in the circuit’s history.

Eckert started from the pole position with Madden alongside him, but the 2011 WoO champion was unable to surge ahead when the initial green flag was thrown. Madden powered into the lead rounding turns one and two and, with the track surface becoming largely one-lane, Eckert had few options to regain command if Madden didn’t make or a mistake or experience misfortune.

“Most of our races it’s really hard to start on the pole and get the jump,” said Eckert, who occupied the second spot from start-to-finish. “It’s like the guy who starts outside pole can arc in a littler easier — even if it’s a worse lane, you can carry a little speed.

“I beat him off four (on the initial start) and I thought I was gonna have a shot, and then down in the middle of one and two you gotta pinch so hard (on the bottom) and he beat me (off turn two). I knew that was gonna be trouble.

Eckert’s second-place finish surpassed his previous best performance on this year’s WoO tour — a third on July 14 at Ogilvie (Minn.) Raceway — but failing to capitalized on his pole starting spot disappointed him. He badly wants to reach victory lane for his car owner Paul Crowl, who informed Eckert during the WoO break following the Aug. 4 USA Nationals at Cedar Lake Speedway in New Richmond, Wis., that he will not field a Dirt Late Model operation in 2019.

“Paul gave us the word the other week that he was closing the team down at the end of the year so we’re trying to get him a win,” said Eckert, whose WoO winless streak reached 49 races since his last victory on Aug. 2, 2017, at Shawano (Wis.) Speedway “He’s been a great car owner, so we’re trying to get him and his sponsors a win but we just haven’t been able to pull it off.”

Madden, of course, isn’t having trouble gathering checkered flags this season. His latest score moved him closer to the double-figure win milestone for 2018 and extended his points lead to 32 points over Marlar and 40 over Sheppard with 10 events remaining on the schedule.

Ask Madden if title thoughts are beginning to overtake him, though, and he’ll tell you his mindset hasn’t changed a bit.

“Like I told a guy earlier tonight, if we win this championship, we do. If we don’t, we’ve done the best we can do and had fun doing it and not stressed over trying to win the championship,” said Madden, who finished second in last year’s WoO standings. “We’ve just raced and tried to do the best we can do. If our best is good enough to get a championship, that’s what we’ll get.

“I don’t even know what’s coming up,” he added when asked about the remaining tracks on the WoO slate. “I had to ask Shane (Clanton) today, ‘Where we going tomorrow?’ I’m here to race today. Tomorrow will be tomorrow.”

Notes: The feature’s lone caution flag, on lap 34, flew when Brent Larson of Lake Elmo, Minn., slowed with a blown right-rear tire. He had run in sixth place for much of the race’s first half. … Donald Lingo Jr. of Millsboro, Del., held the seventh spot for a majority of the distance before slipping to ninth in the final rundown. … Dan Stone of Thompson, Pa., made his first start in Leo Milus’s Super Deuce machine since blowing an engine during the late-June Firecracker 100 weekend at Lernerville Speedway in Sarver, Pa. He retired from the feature for precautionary reasons after the fluid he noticed coming from underneath his car’s hood was followed by a loss of water pressure. … Ross Robinson of Georgetown, Del., sailed off the track between turns three and four during the first heat with his car coming to rest backwards against the dirt berm in front of the pit grandstands. His machine had to be pulled out of thick mud by a wrecker, but he continued racing and won the B-main before placing 14th in the feature. … The newly-named driver of G.R. Smith’s No. 22*, Ross Bailes of Clover, S.C., missed his heat race (he was scheduled to start third) because his crew did not have quite enough time to repair an oil-pump belt that busted on his second qualifying lap. He was back out for the B-main and transferred to the feature but had to scratch due to an oil leak. … Georgetown promoter Brett Deyo was very pleased with attendance for his track’s second WoO event, estimating that the crowd was larger than last year’s inaugural show.