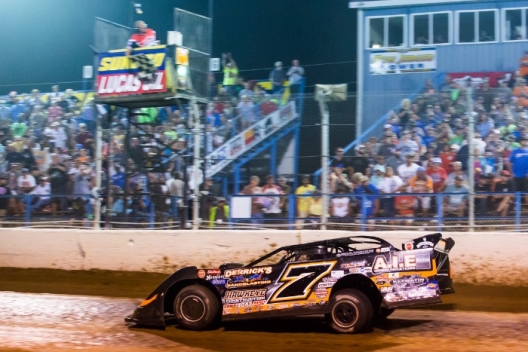 UNION, Ky. — Plenty of northern drivers have captured the Sunoco North-South 100, but none from as far north as Canadian standout Ricky Weiss.

"I still don't think it will ever sink in, even when I wake up tomorrow," Weiss said in victory lane. "Everybody who's part of our team, they just work so hard on this thing and it's definitely paid off this year. It's just been getting better and better and better."

The sixth-starting Weiss inherited the lead after Earl Pearson Jr.’s lap-59 flat tire, lost the point to polesitter Hudson O’Neal on lap-89 after a late-race restart, then led the final 11 laps in taking the checkers a comfortable 2.284 seconds ahead of 13th-starting Tim McCreadie, last year’s race winner from Watertown, N.Y.

Weiss, who in recent seasons has worked closely with his chassis builder Scott Bloomquist and engine builder Vic Hill in Tennessee, scored his 15th victory of the season and biggest of his career at the half-mile oval in northern Kentucky.

"I just know, listening to Scott (Bloomquist) a bunch, not to slide my tires," Weiss said. "Running with (Pearson) for about five or 10 laps, I was waiting for (Bloomquist crewman) Cody (Mallory) to tell me to quit doing that. I just figured it was a long race, maybe I'd hang back and try to judge off him and learn a little bit. Under the caution I was trying to tell (crewman) Shawn (Gage) that he was getting a flat. But I wasn't going to be the one to go tell him to pull off."

Inheriting the lead just past the haflway mark, Weiss crusied over the field, never seriously challenged until a lap-87 restart. Gaining momentum when the race went back green, second-running O'Neal slipped ahead of the race leader down the backstretch, nosing out front at the line to lead lap 89. With the pair running side-by-side, Weiss regained the lead on lap 90, pulling away in the final circuits to take the checkered flag.

"It was cool to run door-to-door with Hudson," Weiss said. "I know this will be his last race (of the year) and he probably wanted to win it more than anyone. But not (more than) me.

"It just kept looking at the laps up top. It's a good thing that they're there. But sometimes it's a bad thing because I was looking at it too much. We had a real good pace and when he got inside of me there I kind of stepped up a little bit. I didn't know how it would stick because I was a lane higher than I had been. But ti ran great. Once I could get back out ahead of him, I could judge off of him and I felt like we were pretty good."

O’Neal, the Martinsville, Ind., driver whose season will be over after his scheduled Aug. 15 shoulder surgery, finished third behind McCreadie, with three-time race winner Jimmy Owens of Newport, Tenn., in fourth. Lucas Oil Series points leader Jonathan Davenport of Blairsville, Ga., who didn’t break into the top 10 until lap 65, rounded out the top five.

After starting 13th, McCreadie, the winner of Thursday's North-South Shootout, didn't find himself among frontrunners until late in the race, pitting with a flat tire under a lap-34 caution. But he rallied to overtake O'Neal for second in the final circuits.

"You can look back at the race and I just needed a little break," McCreadie said. "A flat tire didn't hurt. You take any spot you can and I think we beat two guys out of the pits. Hats off to Weiss for doing it. I know it's hard to get your first one and they did a great job.

"We're happy, just wish we could have had some outside restarts. I just kept getting pinned on the bottom. When (Jimmy) Owens kind of cut left, I finally got all the way out in it and I thought, 'No use saving the rear deck anymore.' We were tracking. I just should have did it lap 81 instead of 91."

While a North-South victory would have made for a storybook ending to O'Neal's 2018 season, it was hard for the 17-year-old driver to be disappointed with his Florence weekend, which included a $12,000 victory in Wedneday's rain-shortened Ralph Latham Memorial.

"We were close," O'Neal said. "Me and Ricky had a good battle going on there. I got in to him a little bit here in (turn) one and I feel kind of bad about that. But overall we had a good race car. We've had a good week all week. I think we had a good weekend to end it. It would have been better if we would have won. But we'll take third."

His previous career-high payday before Florence came with a $20,000 check for July’s runner-up finish in the Silver Dollar Nationals at I-80 Speedway in Greenwood, Neb., on the Lucas Oil Series.

Lap 90: Weiss edges back ahead to lead at the line.

Lap 89: Hudson O'Neal slips ahead of Weiss to narrowly take the lead.

Lap 87: A yellow flag waves as Josh Richards returns to the track in front of the field after pitting.

Lap 85: Weiss holds a comfortable lead over Owens, who is fighting back challenges from Hudson O'Neal.

Lap 70: After pitting early, Jonathan Davenport has rallied back up to seventh.

Lap 66: Hudson O'Neal slips over the cusion, giving the second spot to Owens.

Lap 59: Don O'Neal and Jimmy Mars make contact on the restart, resulting in Mars spinning in turn two. Pearson returns to the hot pit under the caution.

Lap 59: Under the caution it is apparent that Pearson's left-rear tire is flat and he also heads to the pits. Weiss inherits the lead.

Lap 43: Pearson fights back challenges from Weiss, as Owens closes in on the frontrunners.

Lap 37: After racing side-by-side with Hudson O'Neal for a couple of laps, Jimmy Owens takes the third-place spot.

Lap 24: Pearson sets a blistering pace out front as he and Weiss distance themselves from the field.

Lap eight: Earl Pearson Jr. shoots ahead of Hudson O'Neal down the backstretch to take the lead.

Lap one: A smoking Josh Rice slows off the pace to draw the first caution.

10:16 p.m.: Driver introductions are complete and feature cars roll out for pace laps.

It was a three-car battle for the lead on the opening lap, with third-starting Jackie Boggs slipping ahead of front row starters Jared Hawkins and Josh Richards to assume the point. A yellow flag waved on lap four when Billy Green got into the turn-one wall. Sixth-starting Greg Johnson on the move on the restart, battling Tyler Erb for third. As Boggs stretched his lead at the halfway mark, Erb began reeling in Hawkins for the second-place spot. Johnson rallied again late, overtaking Erb to run in third. Boggs won the consolation, with Hawkins grabbing the second and final transfer spot.

Outside polesitter Scott Bloomquist shot to an early lead, holding a more than a half straightaway advantage by lap three. With polesitter Zack Dohm running a solid second, Dennis Erb Jr. challenged Kyle Bronson for third on lap five. Reaching the tail of the field, Bloomquist continued to stretch his lead at the halfway mark, with Bronson closing in on second-running Dohm. A yellow flag waved on lap nine when Craig Vosbergen slowed in turn three with a right-rear flat. Bronson used the restart to his advantage, overtaking Dohm to challenge Bloomquist for the lead. A yellow flag flew on lap 11 when Bloomquist cut a tire. Bronson assumed the point, with  Dohm sliding back ahead of Erb to reclaim second on lap 13. Bronson and Dohm crossed the line nearly side-by-side on lap 14, with Bronson narrowly edging ahead to win the consolation.

Polesitter Gregg Satterlee charged to the front of the field at the drop of the green flag, with fellow front-row starter Josh Rice in tow. With the top two cars distancing themselves from the field by lap five, Darrell Langian attempted to reel in Shanon Buckingham for third. As Satterlee and Rice caught up with the lapped car of Trevor Landrum mid-race, Rice closed the gap between himself and the race leader. Satterlee held off Rice to win the consolation, with Rice transferring to the feature.

A rain shower started falling around 6 p.m. Eastern. But just an hour later, the sun was back out and track prep was under way. Because of the rain, hot laps have been added to Saturday's program. ... Among the 16 drivers locked in to Saturday’s feature, Nick Hoffman of Mooresville, N.C., is the only first-time North-South 100 starter. … There are seven former North-South winners already locked in to the weekend finale, including Don O’Neal of Martinsville, Ind., Jimmy Owens of Newport, Tenn., Jimmy Mars of Menomonie, Wis., Jonathan Davenport of Blairsville, Ga., Bobby Pierce of Oakwood, Ill., Tim McCreadie of Watertown, N.Y., and Eddie Carrier Jr. of Salt Rock, W.Va. McCreadie is the defending race winner. … Michael Chilton of Salvisa, Ky., is the lone home-state driver already locked in to Saturday’s main event. … Topping Florence’s weekly track points standings, Robby Hensley of Walton, Ky., is eligible for a feature provisional. … Among the most notable drivers not yet locked in to Saturday’s feature is Scott Bloomquist of Mooresburg, Tenn., a two-time North-South 100 winner. Bloomquist will start outside the front row of the second consolation. … Planning to undergo shoulder surgery on Aug. 15, Saturday’s feature marks the final race of the year for polesitter Hudson O’Neal of Martinsville, Ind. ... For the second year in a row, Zack Dohm of Cross Lanes, W.Va., found himself just outside the cut off of drivers locked in to Saturday’s feature. He’ll start on the front row of at Saturday consolation next to Scott Bloomquist. “We didn’t have the car exactly right for the first round of heats and we only passed three cars. They did the math last night and if we would have passed one more car we would have been 11th. We’ve got a real good spot for the B-main,” Dohm said. … After winning last year’s non-qualifiers’ race, Dale McDowell of Chickamauga, Ga., will start 12th in Saturday’s main event. He finished third in the 2016 edition of the North-South 100. … Gregg Satterlee of Indiana, Pa., starts on the pole of Saturday’s first consolation. “I’d rather not be in the B-main. They’re stressful. There’s no room for error at all. Hopefully I can just get out front and make 15 good laps,” Satterlee said. … Among drivers scratching from Saturday’s action are Steve Casebolt of Richmond, Ind., Austin Rettig of Sikeston, Mo., Austin Burns of Morgantown, Ind., and Michael Brown of Pageland, S.C. … The 2018 National Dirt Late Model Hall of Fame induction ceremony was held Saturday afternoon.

A busy week of Lucas Oil Series action wraps up on Saturday with Florence Speedway’s 36th annual Sunoco North-South 100. The first eight rows of the feature lineup have already been set by a double round of heat races contested on Friday night.

Based on Friday’s combined passing points, Hudson O’Neal of Martinsville, Ind., and Brandon Overton of Evans, Ga., will start on the front row of Saturday’s $50,000-to-win feature. The 17-year-old O’Neal was the winner of Wednesday’s rain-shortened Ralph Latham Memorial.

Saturday’s program will include three 15-lap consolation races, with the top-two finishers from each race transferring to the main event. Provisionals will make up the final rows of the feature lineup. The show will also include a Late Model non-qualifiers’ race and a UMP modified feature.