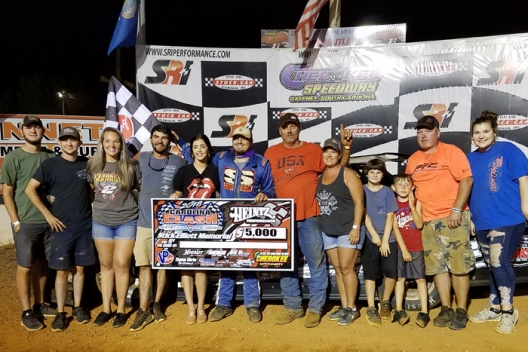 Amanda Lingerfelt
Zack Mitchell and his supporters celebrate at Cherokee Speedway.
What won the race: Surviving a bevy of cautions, Zack Mitchell of Enoree, S.C., won Saturday’s Stick Elliott Memorial at Cherokee Speedway. Mitchell reclaimed the lead from Ross Bailes when Bailes slowed with a flat tire. He then beat Dennis Franklin to the finish by 1.674 seconds to collect $4,000. Joey Coulter finished third.
Quotable: "I knew they were coming on the top there about halfway and I started to move up right before that, but I just didn't," winner Zack Mitchell said. "We got up there to the top and it just didn't seem like I was really that great on the top. I felt a lot better on the bottom. I was scared they was going to go around me on the outside, but we just held on to it. We led every lap and I can't ask for any more."
Key notes: Thirteen of the 24 starters finished the race with 12 completing all 40 laps. … Early race leader and last year’s Stick Elliott Memorial winner Ross Bailes suffered a flat tire that sent him to the tail. ... Mitchell regained the top spot he had just surrendered to Bailes and led the rest of the way. ... Mitchell pulled away over the final 10 green-flag laps. … There have been eight different winners in eight series races. … The series returns on Sept. 2 and Nov. 18.
On the move: Adam Yarbrough started 23rd and finished eighth.
Winner's sponsors: Mitchell’s Longhorn Chassis is sponsored by Eubanks Oil, Clary Hood Inc., Millwood Plumbing, Hi-Bridge Automotive, Charles West Grading, Mechanical Edge, FK Rod Ends and Big A's Custom Graphics.
Points chase: Ross Bailes (710) of Clover, S.C., leads Adam Yarbrough (647), David Yandle (618), Doug Sanders (616) and Dennis Franklin (614).
Car count: 30
Fast qualifier: Zack Mitchell
Time: 15.325 seconds
Heat race winners: Anthony Sanders, Doug Sanders
Next series race: September 1, Lancaster Speedway (Lancaster, SC) $4,000
Editor's note: Results and race details are unofficial.