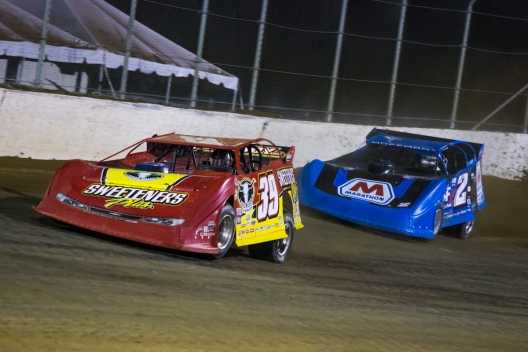 The 44-year-old Watertown, N.Y., driver returned the the half-mile oval in northern Kentucky under gloomier conditions: winless on the national tour, out of touch in the title chase and unloading his single race car in a modest, dually-towed trailer.

All that turned around in Thursday’s North-South Shootout.

Starting on the pole in the $10,000-to-win event, McCreadie led all 50 caution-free laps, turning back a mid-race challenge from Nick Hoffman and withstanding Bobby Pierce’s late charge for his first tour victory in nearly a year.

“It’s amazing how things can turn around,” the Longhorn Chassis house car driver said in victory lane. “We kind of meandered along all year, and it’s a weird deal. Some of the stuff we were doing, I just can’t drive it good enough, and these guys are putting great pieces under me and I’m making ‘em look bad.

“We went back to our motor combination that we used to run last year, we went back to the cars that felt really comfortable, and then I owe it all to (the crew). I’ve been home two weeks with family. I take not credit in the win because these guys put it (in victory lane) tonight. I just got lucky enough that I could see (crew chief Phillip Snellen) down the backstretch to let me know Bobby was. I don’t know if I could’ve held him off, but we held him off for half a lap, and that’s good tonight.”

McCreadie’s shot-in-the-arm victory, coming one night after a 24th-to-eight run during a busy week at Florence, came 0.759 seconds ahead of Pierce, the Oakwood, Ill., driver who charged from his seventh starting spot.

Hoffman, a modified-turned-Late Model driver from Mooresville, N.C., finished third for his best-ever series finish while while reigning tour champ Josh Richards of Shinnston, W.Va., and Scott Bloomquist of Mooresburg, Tenn., rounded out the top five.

McCreadie, who entered the week with just four podium finishes during a difficult season, brought a new Longhorn to four nights of action at Florence and quickly got a handle on it.

“I’m not always the most confident guy in the world. I roll with the punches the best I can,” McCreadie said. “Like I said, it’s the crew, these guys keep me built up, and they keep me feeling good. My family keeps me feeling good at home. Because this is a tough life, this whole deal … we’ve gotta drive 10 hours one way and be back 10 hours the other on a Wednesday. And I cherish the way you guys cheer for all of us, every one of us deserves a lot of cheers.

“It’s not always cool to ride around in the dualie, but if you win with a dualie and one car, it’s a lot of fun.

“We do this with one paid employee and a lot of help, whether it’s Longhorn taking their payroll to help us with guys or whatever, I’ve always said the last year I can’t imagine what would happen if we ever had an influx of cash to be on par. But we’ll keep doing the best we can with what we’ve got and try not complain.”

Pierce took second from Hoffman on the 40th lap and got within four-tenths of a second of McCreadie on the white-flag lap before settling for second on a track surface much improved from Wednesday’s rugged affair.

“It was a lot of fun. I really had to kick it up there towards the end,” Pierce said. “With those holes being there, it was something, but a great track. (Promoter) Josh (King) he was on this thing all night, I think, I don’t know if he went to sleep. He really got a lot of those holes out of the track. I’m sure another night working on it things should be pretty smooth tomorrow.”

Pierce figures a caution or two might’ve helped his cause in trying to chase down McCreadie.

“Even though (the car’s handling was free), it was tough, and I was definitely having to get up on the wheel, but that’s what made it really fun. Once again, congrats to T-Mac on the win. Hopefully we can get these heat races down tomorrow, get some good runs and get locked in (Saturday’s) show.”

Hoffman, who started on the pole in Wednesday’s main event and faded to 10th, found “something to build on to go onto this weekend” with his third-place finish.

“When (Pierce) got up on the board and right behind me (and started getting closer), he slid me there,” Hoffman said. “I probably had an opportunity to slide him back, but I knew he was going to be fast up there. So I just kind of fell in line to see and try and make sure I could hold onto third and not let those guys behind me catch up to us. It’s just really cool.

“This race two years ago was my first-ever start in a Late Model, and people called me crazy for coming the North-South for my first-ever Late Model start. To come back and get a top-three two years later, that’s pretty cool. I just gotta keep digging with it. We learn every time we go racing, we get better and we just keep improving. That’s the biggest thing.”

Mike Marlar of Winfield, Tenn., departed from Florence following Wednesday’s program, heading home to diagnose engine problems. … Among others missing from Thursday’s field is Duane Chamberlain of Richmond, Ind., who decided to forgo the remainder of the North-South 100 weekend after suffering damage to his car on Wednesday night. … Also absent are Michael Page of Douglasville, Ga., who retired early to finish 20th in Wednesday’s feature, and Kenneth Howell of Inez, Ky.. … After wildly rolling his No. 12 in a Wednesday heat race, Jason Jameson of Lawrenceburg, Ind., and his Rattliff Racing team have pulled out a backup car for the remainder of the weekend. But surprisingly, Jameson’s not feeling the aftermath of Wednesday’s rollover. “I thought I’d wake up sore as hell. But I’m fine,” he said. … Scott Bloomquist of Mooresburg, Tenn., is racing out of North Carolina driver Chris Ferguson’s hauler this weekend while his own rig is being repaired. Bloomquist did acquire a new powerplant for Thursday's program after suffering engine problems on Wednesday night. … James Rice of Verona, Ky., debuted a new Swartz Race Car on Wednesday night, failing to qualify for the main event. “He just wanted to shake it down. Hopefully we’ll be up to speed tonight,” said Jerry Rice, father and crew chief to James and younger brother Josh. … Lucas Oil Series points leader Jonathan Davenport of Blairsville, Ga., broke a J-bar and a driveshaft during Wednesday's feature. His team has made the repairs and he's ready for Thursday's program. ... Among drivers joining the field for Thursday’s show at Greg Johnson of Bedford, Ind., Eric Wells of Hazard, Ky., Michael Brown of Pageland, S.C., and David Seibers of Chapel Hill, Tenn.

The Lucas Oil Late Model Dirt Series action continues Thursday at Florence Speedway with the North-South Shootout. The $10,000-to-win event was added as a precursor to the crown jewel weekend for the first time last year.

Jimmy Owens of Newport, Tenn., was the winner of last year’s North-South Shootout. Owens is a three-time Sunoco North-South 100 champion, his most recent victory coming back in 2011. Entering his last weekend of action before undergoing Aug. 15 shoulder surgery, 17-year-old Hudson O’Neal of Martinsville, Ind., was the winner of Wednesday’s rain-shortened Ralph Latham Memorial.

Thursday’s program will include hot laps, time trials, six heat races, two consolations and the 50-lap main event. The top three cars from each heat race will transfer to the feature, with the top two finishers transferring from each consolations. Provisionals will set the final row of the feature lineup. Modifieds will also be in action, including a makeup feature from Wednesday’s rainout.