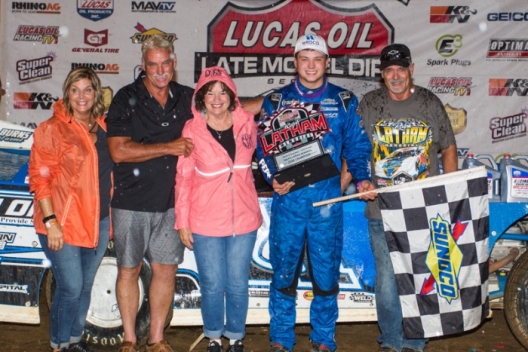 UNION, Ky. (Aug. 8) — Unforgettable might be the best word to use in describing Wednesday’s 32nd annual Ralph Latham Memorial at Florence Speedway.

Rolling off from the third starting spot, O’Neal powered to second on an early restart, quickly reeling in race leader Kyle Bronson of Bronson, Fla. With the pair racing side-by-side, O’Neal edged ahead out of turn four to assume the point on lap six of 25, leading the remaining distance for his second Lucas Oil Series victory of the season.

“(Bronson) was pretty good there around that bottom and I just happened to try up there one time and I got stuck out there,” O’Neal said. “I was like, ‘Man, this feels really good.’ It paid off  and we were able to drive to the front there.

“I didn’t think it would race near that good. But they did a good job at packing it in there and it definitely made it a little bit better.”

As the top three cars distanced themselves from the field, second-running Bronson attempted to close the gap between himself and O’Neal on lap 13, only to slow with a right-rear flat three circuits later. Erb inherited the position, challenging O’Neal for the lead on the restart. As rain halted the action on lap 22, Erb’s charge was slowed, with the Texas driver settling for a runner-up finish at the checkered flag.

“Weather played a big role,” Erb said. “But congrats to Hudson. … This was definitely a wild race. You could run the top. That’s where he was running. I could make up a little ground through the bottom there. You just had to be careful not to turn this thing over. It was all in all a good night.”

Notes: O’Neal scored his second Lucas Oil Series victory of the season. His first career series victory came on June 16 at Magnolia Motor Speedway in Columbus, Miss. … The feature was originally scheduled for 50 laps but was shortened because of rain. … The race was slowed by five cautions. … The first yellow flag waved on lap three when Mason Zeigler slowed on the frontstretch. …  Donald McIntosh spun on the backstretch to draw a caution on lap four. … A yellow flag flew on lap 16 when second-running Kyle Bronson slowed with a flat right-rear tire. … Fourth-running Jonathan Davenport drew a caution on lap 22 when he slowed on the frontstretch; a yellow flag flew on the ensuing restart when Scott Bloomquist and Kyle Bronson tangled on the frontstretch. … Ten of the 25 feature starters qualified for their first Ralph Latham Memorial.

Former Florence track champion Jason Jameson of Lawrenceburg, Ind., wildly rolled his No. 12 machine while running third in the fourth heat race. After coming to a rest in turn two, he was able to climb from the car on his own. … Scott Bloomquist of Mooresburg, Tenn., retired early from that same heat when his car started billowing smoke. He'll pull out a backup car and use a series provisional to start Wednesday's feature. … Steve Casebolt of Richmond, Ind., was running in a transfer spot when he suffered a flat tire in the second heat. … Defending Sunoco North-South 100 winner Tim McCreadie retired early from his heat after slowing with mechanical issues. … Brandon Overton of Evans, Ga., was among the biggest movers in heat race action, rallying from the seventh starting spot to win the sixth heat. … Winning the first heat race, Nick Hoffman of Mooresville, N.C., will make his first-ever Ralph Latham Memorial start. … Scott James of Bright, Ind., is sporting a throwback paint scheme in tribute to his father Bubby James, who is being inducted into the National Dirt Late Model Hall of Fame on Saturday. … Among drivers making their first-ever appearance at Florence are Rob Anderzack of Swanton, Ohio, Jeremy Conaway of Rochester, Ill., Rob Mayea of Bend, Ore., and Austin Burns of Morgantown, Ind.

Florence Speedway kicks off its Sunoco North-South 100 weekend with the 32nd running of the Ralph Latham Memorial. The $12,000-to-win Lucas Oil Late Model Dirt Series event was added to the crown jewel weekend after its original May 5 date was rained out.

Scott Bloomquist of Mooresburg, Tenn., enters the weekend as the fourth-time and defending Ralph Latham Memorial winner. Devin Gilpin of Columbus, Ind., and Jason Jameson of Lawrenceburg, Ind., are among drivers picking up big victories at Florence earlier this season.

Wednesday’s program will include hot laps, time trials, six heat races, two consolations and the 50-lap main event. The top three cars from each heat race will transfer to the feature, with the top two transferring from each consolation. Provisionals will set the final row of the feature lineup. Modifieds will also be in action.