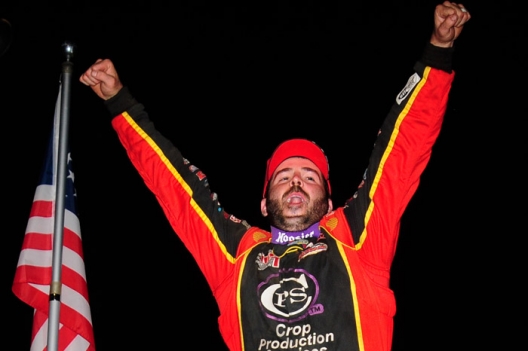 BROWNSTOWN, Ind. (Aug. 4) — Billy Moyer Jr. of Batesville, Ark., added his name to the list of  Hall of Fame Classic winners on Saturday at Brownstown Speedway, leading flag-to-flag for a $10,000 victory in the 14th annual event co-sanctioned by the MARS Racing Series and Schaeffer’s Iron-Man Series.

It was a perfect night for the 30-year-old Moyer, who clocked the evening’s overall fast time and and won his heat race to start on the pole of the 50-lap feature. Charging to the lead at the drop of the green flag, Moyer wired the field, outrunning Tanner English of Benton, Ky., for his third victory of the 2018 season.

“The track was really good,” Moyer said in victory lane. “It kind of got tough to pass there later on. But 100 degrees, when it’s really miserably hot, that’s about all you can ask for. … The track was good. Later on it did get that sweet spot. I got a little snug there and I wasn’t driving hard enough there. There’s a fine line … the harder you drive, the better. But then again you still can burn your right-rear tire off, so you’ve got to find that sweet spot.”

With Moyer holding a comfortable lead, third-starting English and outside polesitter Michael Kloos of Trenton, Ill., battled in the early running, the advantage going to Kloos on the high side. As Moyer entered lapped traffic on lap 18, Kloos began closing the gap between himself and the race leader, but was unable to gain enough ground to become a serious threat.

As Moyer continued to show the way out front at the halfway mark, it was English rallying late in the distance after slipping back to fourth mid-race. Pulling back ahead of Kloos and Kent Robinson of Bloomington, Ind., English set his sights on Moyer. With the frontrunners working their way through lapped traffic, the race’s final caution fell on lap 45, setting up a five-lap dash to the finish. Moyer sailed to the checkers, earning his second $10,000 payday of the season.

“I didn’t pay attention to that (score) board for a while,” Moyer said. “Then I seen (English) was in second. I knew he passed some cars and I knew he’d be tough. But I seen No. 96 and No. 7 and those guys aren’t going to run you over and I’m not going to run over them. I didn’t have to worry about that. As long as I hit my marks, I think we had the car to beat. I’m just glad to get a win here.”

English finished runner-up for the second straight night, with Robinson, the winner of Friday’s co-sanctioned event at Bloomington (Ind.) Speedway running third. Kloos finished fourth, with Michael Chilton of Salvisa, Ky., improving from the ninth starting spot to round out the top five.

“Right there before the caution I felt like I got it rolling and we had caught him in a pretty short amount of time,” English said. “I’ve been second so many times this year, it ain’t even funny. I want to win, but it’s good to run good.”

A podium finish capped off a solid weekend for Robinson, who earned a $3,000 payday at his hometown racetrack just one night earlier. But he would have enjoyed repeating his July 7 MARS victory at the Brownstown oval.

“I just knew when we got beat in the heat race, that just makes a little bit taller hill to climb throughout the night,” Robinson said. “I find myself making changes to the race car I probably shouldn’t make because I’m starting sixth. And I think that’s what happened tonight. Just a click here on a shock or a turn on a spring and we were just a little off. We got beat. That’s all there is to it. But we can’t hang our head.”

Notes: Moyer got his second career MARS victory (his first came last season at West Plains, Mo.) and first on the Iron-Man Tour. ... Saturday’s victory marked Moyer’s third on the 2018 season, including a World of Outlaws Craftsman Late Model Series triumph at Whynot Motorsports Park in Meridian, Miss. … The race's initial start was called back twice when Zak Blackwood and then Jared Bailey slipped over the berm in turns three and four on the green flag lap. ... John Clippinger stopped on the frontstretch to draw a caution on the second lap. ... A yellow flag waved on lap nine when David Webb slowed on lap nine with a flat right-rear tire. ... The final caution fell on lap 45 when fifth-running Nick Hoffman spun on the backstretch.