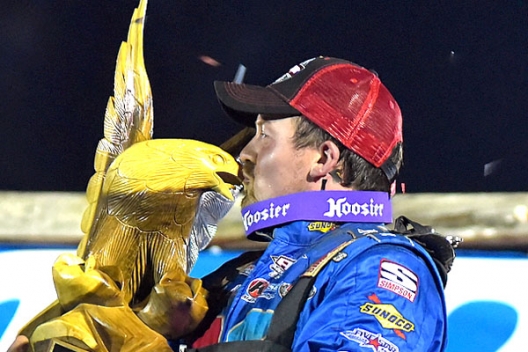 NEW RICHMOND, Wis. — It was seven years ago at Cedar Lake Speedway that Brandon Sheppard had his first conversation with Mark Richards that led to an eventual ride with one of Dirt Late Model racing’s top teams.

On Saturday, Sheppard, Richards and their Rocket Chassis house car teammates were enjoying the spoils of their potent combination at Cedar Lake, hoisting the carved wooden eagle trophy of Cedar Lakes 31st annual USA Nationals along with the $50,000 paycheck of one of the sport’s crown jewel events.

While documenting his car’s dominance in Saturday’s victory lane interview, the 25-year-old driver from New Berlin, Ill., paused with a sigh of relief — and accomplishment.

“Oh wow,” Sheppard said. “It’s going to take a while for this one to soak in, but it means the world to me.”

Completing a sweep of the weekend’s pair of features at Cedar Lake's third-mile oval and winning for the third time in four Wisconsin events, Sheppard grabbed the lead from Jimmy Owens of Newport, Tenn., on lap 23 and waved off threats from Brian Shirley of Chatham, Ill., and Owens the rest of the way.

A final restart on lap 94 of the 100-lapper tightened the field, but Sheppard eased away for his first USA Nationals victory and his 11th WoO win of 2018. He flashed under the checkered flag 2.507 seconds ahead of Shirley, who overtook Owens for second on lap 98.

“It’s a dream come true, honestly,” Sheppard said. “Actually in 2011 here, I had a really good run going and I was driving my Pierce car and I was still young, still learning.

“That’s the first night at met Mark Richards was at this race, and I remember him and (four-time WoO champion) Josh (Richards) came up and told me good job. I ran second to ‘em in a heat race, and that was a big deal for me just making the race.”

And seven years later, Sheppard’s goals are quite a bit loftier.

“It’s just a huge event and it means the world to me to get the win,” he said.

Sheppard’s victory made him the second driver in three years to win both WoO features during the USA Nationals weekend — joining Josh Richards, who preceded him in the familiar blue No. 1 Rocket machine.

Shirley grabbed second place from Owens for the first time on lap 25 and stayed within striking distance of Sheppard for some of the race’s middle stages, even nosing under Sheppard in turns one and two on lap 30. But Shirley couldn’t summon enough speed to seriously challenge Sheppard after the pacesetter adjusted his groove to run the extreme top of the track on lap 61 and ultimately spent the final 18 tours contesting Owens for the $20,000 runner-up spot.

Owens, who started from the outside pole, settled for a third-place finish after leading laps 1-22 and briefly drawing within striking distance after he overtook Shirley for second on a lap-82 restart. The 2014 USA Nationals champion spent the last six circuits following the final restart well behind Sheppard battling with Shirley, who finally regained second place with a hard slide through turns three and four heading to the two-to-go signal.

Chase Junghans of Manhattan, Kan., crawled forward from the ninth starting spot to finish a solid fourth and Bobby Pierce of Oakwood, Ill., tossed his family-owned Pierce Race Car around the outside of the speedway to finish fifth after starting 20th.

With Thursday’s narrow preliminary victory over Jonathan Davenport that paid $6,000, Sheppard new he had a chance at a special weekend.

“I’ve been coming here for quite a few years now and have had a really good car, won a few preliminary nights … man, I knew Thursday night, them last couple of laps there, I moved out to that middle, and I thought, ‘Man, our car’s pretty good.’ And I knew we had something if we made it through the double heat races,” Sheppard said. “It’s a dream to drive. I could run the cushion, I could run the bottom, I could run the middle, pretty much wherever I needed to put it it went.”

Sheppard still had to handle a relatively rugged surface that kept speeds high throughout the long-distance affair.

“It was one of them deals it was tough to lead. I didn’t really know where I needed to be,” Sheppard said. “That cushion in (turns) one and two was a lot better than what I thought it was going to be. My car was really good through that middle there, so I was hoping the middle would be good, but it was a little bit rough getting in (to the corner).

“So the cushion was a little bit smoother through one and two for me, and then in (turns) three and four, I got to where I could enter in pretty high and then roll the middle through the center of the corner, and that helped me out there keeping my tires underneath me a little bit better. The long runs, I felt like I was abusing (the tires) a little bit, but there on that last caution, I knew I could just let it all hang out and hope they hung on.”

Even if Sheppard wasn’t letting it all hang out, Shirley knew that overtaking the fellow Illinois driver was going to be difficult.

“We were pretty good there. I was probably just off a little bit compared to where Brandon was,” Shirley said. “I can’t thank (enough) Mark and Steve Baker of Rocket Chassis, really the whole Rocket team. They put me in this position to be as good as we are this year. … We always want to win, but when them guys help us out as much as they do, we appreciate that. But all in all it was a great night.”

Owens settled on a pacing strategy that never let him seriously get back into contention after he led early.

“We’ve had some good runs here in the past, and we led a little while there to begin with,” Owens said. “Those guys passed me and I let ‘em go on a little bit, I thought, ‘Man, they’re racing awfully hard. I’m going to slow the pace down here and see if I can save something for the end.’ I could get up against that cushion and run ‘em down, but it was going to take a pretty good hot rod to beat (Sheppard).

“You had to get your wheels spinning right there, and with the grit and stuff in the track, I was thinking we were going to blister our right rear … heck, those guys were hammering on it and going, and it seemed like the harder I ran, the better it got. But I’m happy with a good third-place finish. We were competitive.”

Iowan Tyler Bruening spun in turn four on lap 45 to erase a half-straightaway lead for Sheppard while the final cautions appeared for the slowing cars of Chris Simpson (lap 82) and Ricky Weiss (lap 94).

Half the 28 starters completed 100 laps and 16 were running at the finish.

Lap 100: Sheppard pulls away after last restart, wins by 2.507 seconds over Shirley, who overtook Owens for second on lap 98. Owens finishes third, followd by Junghans and Pierce.

Lap 23: Sheppard sails around outside of Owens off turn four to take lead.

Cedar Lake’s famed driver introductions — with the track lights turned out and fans waved blinking cups, each car rolled onto the track bathed in a spotlight — ended at 9:50 p.m. and the 28-car field pulled off to begin pace laps. … Provisional starters for the 100-lapper include Rick Eckert and Brent Larson (WoO points); Rob Mayea (FANSFund); and A.J. Diemel (track). … Hudson O’Neal had the first shot at the FANSFund provisional for being the highest-finishing driver in the earlier dash who did not qualify, but he declined the spot after smacking the wall with significant force during a B-main.

A caution flag that set up a green-white-checkered finish gave Nelson a final shot but he settled for second place, 0.495 of a second behind Matthees.

The NASCAR Late Model headliner ended at 8:59 p.m., leaving only the 100-lap USA Nationals to be run. Track reconditioning and driver introductions will take place before the weekend finale hits the track.

Jason Feger passed Matt Furman for the lead on lap five and turned back a late challenge from Dale McDowell to capture the 15-lap event. McDowell overtook Furman on lap nine and finished 0.472 of a second behind Feger to claim the final transfer spot.

Frank Heckenast Jr. scored a flag-to-flag victory, racing unchallenged the entire distance. Bobby Pierce held off Jason Rauen to finish second, 2.258 seconds behind Heckenast. Caution flags flew on the first circuit for Al Humphrey stopping on the homestretch and on lap two when Hudson O’Neal smacked the backstretch wall to set off a scramble that swept up Joey Moriarty and Jordan Yaggy.

Tyler Bruening led the entire 15-lap distance to emerge victorious, but he had to survive challenges from both Shane Clanton and Chris Madden in the final laps to preserve his triumph. Clanton’s final-circuit bid came up just 0.170 of a second short while Madden claimed the third and final transfer spot in the caution-free event.

Ricky Weiss romped to victory in the 12-lap FANSFund Dash reserved for drivers who accepted invitations to attend the USA Nationals and compete for bonus appearance money, easily outdistancing Dale McDowell by 5.114 seconds.

The victory earned Weiss a cool $2,900 from the $27,450 in cash that was collected by the FANSFund and spread across the remaining starters in the dash.

After heavy rain struck the track shortly after the completion of Friday evening’s USA Nationals Pole Dash and continued periodically through the overnight hours and lighter showers lingered until early afternoon, the precipitation ceased around 3 p.m. Teams began unloading around 4 p.m. to prepare their cars — everyone quickly loaded up Friday night to beat the rain — and officials announced that hot laps would be moved up a half-hour to 6 p.m. With the racetrack already sealed from a night of action when the showers hit on Friday, the surface appears to be on schedule for the 6 p.m. start time. … The schedule of events is likely subject to change depending on the weather. Rain looks to have passed by the track, but the chance for showers does remain throughout the night. … The downpours have left more than half the pit area extremely sloppy. Teams have been working to pack down their sections of the pits the best they can; one interesting plan of attack was employed by Jimmy Mars of Menomonie, Wis., whose 14-year-old son, Sam, was seen running a four-wheeler in circles with a wooden pallet dragging behind it. When it became evident that the pallet needed some weight on it to better pack the mud, Sam himself sat on it as another crewman drove the ATV. … Former USA Nationals winners among the 16 drivers locked into the 100-lapper through Friday’s double-heat program are Mars, Jimmy Owens of Newport, Tenn., Jonathan Davenport of Blairsville, Ga., and Don O’Neal of Martinsville, Ind. … Two drivers who transferred to the A-main on Friday are first-time USA Nationals feature starters: Ricky Weiss of Headingly, Manitoba, and David Breazeale of Four Corners, Miss. … Five-time USA Nationals champion Billy Moyer of Batesville, Ark., headed home after suffering dismal Friday results that left him buried in the back of a B-main. He opted to end his weekend early, marking the first time since 2009 that the Hall of Famer will not be in the USA Nationals feature field.

Last-chance races and the FANSFund Dash held over from Friday night are on Saturday’s agenda for the WoO Late Models. The field will be rounded out by provisional starters.

Devin Moran of Dresden, Ohio, will start from the pole position in the 100-lapper after winning Friday night’s Pole Dash. Jimmy Owens of Newport, Tenn., was second in the 8-lap sprint and will take the green flag from the outside pole.