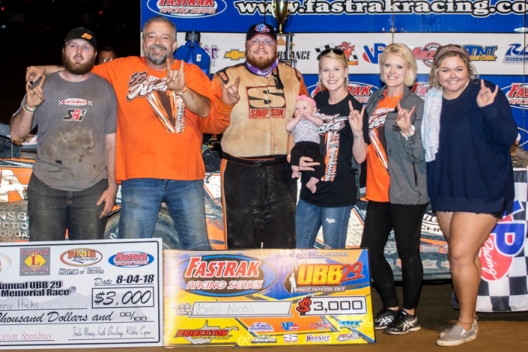 Peeping Dragon Photography
Benji Hicks won his second straight UBB Minors Memorial.
What won the race: Benji Hicks of Mount Airy, N.C., earned $3,000 Saturday at Princeton Speedway in a repeat victory of the UBB Miners Memorial on the Fastrak Racing Series. Hicks took the lead from polesitter Brandon Umberger on the 15th lap and led the rest of the 40-lapper, taking the checkers 3.774 seconds ahead of Umberger.
Quotable: “I knew the high side was a little treacherous up there. I could get enough momentum and then we had that caution and I was like, you know if I can screw a little more rear brake to it to get the car bent a little bit more getting in then I can drift up to the cushion and be alright and that’s what I done,” said Hicks. “I hate I got into Brandon (Umbergen) there on the bottom but I hit that slop and I know I came across Mathew’s nose too. Mathew gave me just enough room to see the high side going into (turn) three and that’s really all I needed.”
Key notes: Hicks, who also won the event last season, was among 13 drivers completing 40 laps. ... Brandon Umberger settled for second while Fastrak Racing Series points leader Matthew Nance was third. ... Princeton hosted the eighth annual UBB 29 Miners Memorial, which honors the 29 miners who passed away in the Upper Big Branch Mine disaster in April 2010.
On the move: Michael Bland of Pineville, W.Va., started 10th and finished sevent.
Winner's sponsors: Hicks drives a Longhorn Chassis sponsored by T&K Enterprises, Hooker Harness, Dayton Lube, SBS Bearing, Butler Built, RE Suspension, Auto Zone, South Main Street Service Center and Randy’s Custom Lettering.
Points chase: Entering the weekend, Matthew Nance (238) of Ronda, Ga., led Brett Hamm (170) and Ross Bailes (169).
Car count: 17
Fast qualifier: Brandon Umberger
Time: 17.001 seconds
Polesitter: Brandon Umberger
Dash winner: Brandon Umberger
Heat race winners: Brett Hamm, Hunter Stinnett
Next series race: August 31, Beckley Motorsports Park (Beckley, WV) $2,000
Editor's note: Results and race details are unofficial.