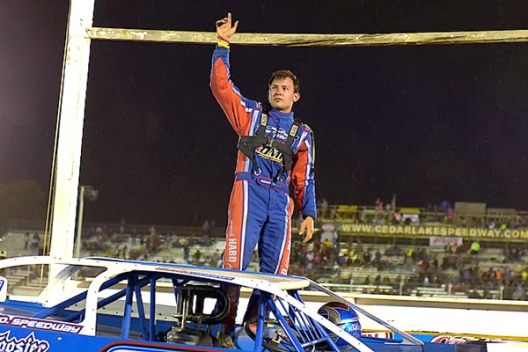 Less than one week removed from scoring a career-high $30,000 victory in the July 28 Prairie Dirt Classic, Moran, 23, overtook Jimmy Owens of Newport, Tenn., for the lead on lap two of the 8-lap sprint for the top eight drivers in the evening’s passing points and controlled the remainder of the distance. The rising young star beat Owens to the finish line by 0.873 of a second.

Owens, who led the race’s first lap after starting from the pole, will take the green flag in Saturday’s 100-lapper from the outside of the front row. He won the USA Nationals in 2014.

Moran set himself up for his success in the dash with a pair of runner-up finishes in the evening’s double-heat program, the first time in the 31-year history of the USA Nationals that the unique qualifying format was used. He advanced from the seventh starting spot in Round 1 and third in Round 2, tying him with Owens, who finished third in Round 1 and won his Round 2 heat, for the most combined passing points (120.56).

While Owens earned the pole for the dash thanks to a tiebreaker, Moran wasn’t hampered by starting on the outside pole. He kept his Tye Twarog-owned XR1 Rocket alongside Owens from the initial green flag and pulled ahead for good on lap two.

From Moran’s seat, the third-mile oval’s surface was to his liking. He isn’t sure if the conditions will be quite the same come Saturday night, however.

“Right there in that dash I think me and Jimmy ran side-by-side for the first four laps,” Moran said. “It was really good racing. I’d say they’ll have a little more juice up tomorrow with the way the weather is (heavy rain hit the facility moments after the dash ended), but we’ll have to just take it how it is and see if we can stay up front.

“I don’t really know if I like starting on the pole in this deal,” he added. “I’d rather start third, fifth, seventh in this deal, but we’ll just take it. I don’t know exactly what we’re gonna do. I don’t know what our game plan is. We’ll sit down and talk, me and Keith (Berner of Accu-Force Dynos) and (younger brother) Wylie (Moran) and (crewman) Kicker. I think we’re just gonna have to see what they do to the track and see what the weather’s like and we’ll go from there.”

Moran is eyeing a second major-event triumph in the span of a week — and a victory in a crown jewel event that his Hall of Fame father Donnie, who isn’t at Cedar Lake this weekend because he’s back home overseeing a Kids’ Night racing program at the family’s Muskingum County Speedway in Zanesville, Ohio, captured in 1998.

“My dad won this race exactly 20 years ago,” said Moran, who has ripped off 13 top-five finishes in his last 17 WoO A-main starts. “He’s got the check sitting up on the wall in the shop. I see it every day when we’re at the house.

“Getting my first big win last weekend at (Illinois’s) Fairbury (American Legion Speedway), that was real special. If we could go back-to-back, words couldn’t describe that.

Moran will seek to become the second driver in the last three years to win the Prairie Dirt Classic and USA Nationals in consecutive weeks, joining Josh Richards of Shinnston, W.Va., who pulled off the double in 2016.

Brandon Sheppard of New Berlin, Ill., who won Thursday night’s 40-lap WoO feature, finished third in the Dash and will start inside the second row in the 100-lapper. Brian Shirley of Chatham, Ill., placed fourth in the dash to put him outside of Sheppard in the A-main.

Friday’s 10 heat races did not see a single repeat winner. Jason Rauen of Farley, Iowa, WoO points leader Chris Madden of Gray Court, S.C., Shannon Babb of Moweaqua, Ill.,, Kyle Bronson of Brandon, Fla., and Shirley captured Round 1 heats, while Dale McDowell of Chickamauga, Ga., Owens, Sheppard, Jimmy Mars of Menomonie, Wis., and Tyler Erb of New Waverly, Texas, won Round 2 prelims. Raven, Madden and McDowell were the only heat winners who did not earn enough combined passing points to rank among the 16 drivers who transferred to the USA Nationals feature.

Rain began spitting during the Pole Dash, signaling the arrival of threatening rain that had led officials to push the program along. With a downpour inundating the track shortly after the race, officials postponed the 12-lap FANSFund Dash — the only race remaining on the Friday schedule — to Saturday night.

Fourth-starting Brandon Sheppard grabbed the lead on lap two with a breathtaking three-wide move in turn two — splitting lap-one pacesetter Billy Moyer and Dennis Erb Jr. — and marched on to a convincing victory over Erb. A caution flew on lap nine when Hudson O’Neal slowed with a right-rear flat tire while running fifth.

Capping off a thrilling heat race in dramatic fashion, Jimmy Owens overtook Nick Anvelink off turn four with the checkered flag flying to triumph by a mere 0.217 of a second. Anvelink had swapped the lead multiple times with A.J. Diemel — Diemel led laps 1-3 and 5-8 while Anvelink paced laps 4 and 9-11 — before Owens completed his charge to the front from the seventh starting spot.

Dale McDowell led all the way, surviving a last-lap challenge from Devin Moran to beat the Prairie Dirt Classic winner by 0.644 of a second. Mike Marlar made the biggest move, advancing from eighth to finish third. A caution flag was needed on lap two when the turn-four start cone was dragged onto the racing surface; three laps later a red flag was put out for a hard backstretch crash that saw Don Shaw smack the wall, spin into the middle of the track and get clipped by the passing Brent Larson. Shaw’s car was heavily damaged but he wasn’t injured.

With rain threatening Cedar Lake Speedway from the west, officials decided to scrap the NASCAR Late Model B-main that was scheduled to run between the two rounds of WoO heats. Round of the WoO prelims was moved up with the first heat beginning to line up in the pit area by 8:07 p.m.

Brian Shirley overtook Mike Marlar for the lead midway through the 12-lapper and drove away to beat the Tennessee driver by 2.116 seconds.

Kyle Bronson scored a flag-to-flag triumph, beating Devin Moran to the finish line by 0.629 of a second. Ricky Weiss settled for third after ceding second to Moran.

Shannon Babb overtook Don Shaw for the lead on lap seven and marched on to beat the Minnesota driver by 1.356 seconds. Brent Larson, who led laps 1-5, settled for third and fourth went to Brandon Sheppard, who survived a hard bounce over the front end of a spinning Steven Roberts in turn two on lap five.

Chris Madden dominated the 12-lapper, scoring a wire-to-wire win. Chase Junghans passed Jimmy Owens for second on lap seven and crossed the finish line in the bridesmaid position, 0.950 of a second behind the victor.

Jason Rauen led all the way, staving off a mid-race challenge from Jonathan Davenport to beat the former USA Nationals champion by several car lengths. Davenport swapped second with Frank Heckenast Jr. before securing the runner-up spot. Caution flags flew on lap two for Tyler Erb sitting sideways between turns one and two and lap five for Jeff Massingill sliding lightly into the tires at the end of the inside wall off turn two.

Overcast skies with temperatures in the upper 70s prevail for Friday’s qualifying program. Thunderstorms were in the area Friday morning but didn’t hit the track. … The 45-car field signed in for the USA Nationals qualifying program is exactly the same as competed in Thursday night’s WoO show. … Chris Madden of Gray Court, S.C., gained sole possession of the WoO points lead with a sixth-place finish in Thursday’s 40-lap A-main, but he was disappointed with his run. He started from the pole position, after all, but couldn’t stay there because his car’s throttle linkage fell off as he headed onto the track. “I was racing on two (carburetor) barrels the whole race,” said Madden, who maintained a spot in the top five until a caution flag flew on lap 23. “It felt like I was driving a crate motor.” … Mike Marlar of Winfield, Tenn., who entered Thursday’s program tied for the WoO points lead with Madden, was never a factor all night while struggling to an 18th-place finish. He was at a loss to understand the source of his subpar performance; in an effort to get back on track, Marlar and his crew changed the rearend and lift-bar, among other components, and gave the car a thorough check-over on Friday afternoon. … There won’t be any further change in the WoO points standings this weekend because the USA Nationals finale offers only show-up points. … Don Shaw of Hamm Lake, Minn., loaded up and headed back to his shop after failing to qualify for Thursday’s WoO A-main. He’s back this evening, though, and has two cars unloaded so he can pull double-duty and also compete in the companion NASCAR Late Model action highlighted by a 40-lap feature. … Other drivers running both full-fender divisions this evening include Jimmy Mars of Menomonie, Wis., who will drive his father-in-law’s red No. 28 in the NASCAR Late Model competition; A.J. Diemel of Elk Mound, Wis., who will be behind the wheel of the injured John Kaanta’s No. 85 in the NASCAR ranks; Ricky Weiss of Headingly, Manitoba; and Jeff Massingill of Keewatin, Wis. … Jason Feger of Bloomington, Ill., replaced the driveshaft, among other parts, and hammered his car’s bodywork back into place in the wake of Thursday’s B-main crash that saw him nearly flip on the frontstretch. … Veteran Al Humphrey of Giltner, Neb., was also swept up in the B-main incident involving Feger, inflicting significant cosmetic damage to his Victory Circle car. Billy Moyer’s longtime crewman, Steve Norris, pitched in to help Humphrey get his machine repaired; Norris noted that he put that car together before its first racetrack appearance nearly a decade ago. … Mark Richards, who owns the Rocket Chassis house car that Brandon Sheppard of New Berlin, Ill., drove to victory in Thursday’s WoO feature, succinctly summed up the torrid, down-to-the-wire battle between Sheppard and Jonathan Davenport of Blairsville, Ga., that made the 40-lapper so memorable. “Like I just told Davenport a little bit ago, ‘You’d thought we was racing a $100,000-to-win and we was racing for $6,000,’” Richards said. “When it comes down to it, the money doesn’t matter. You want to win.”

The 31st annual USA Nationals weekend continues on Friday night at Cedar Lake Speedway with a World of Outlaws Late Model Series-sanctioned qualifying program featuring a brand-new format. Time trials have been abandoned for 2018 in favor of a double-heat concept that uses a draw to set lineups and passing points to determine the transfers to Saturday night’s 100-lap, $50,000-to-win finale.

Each round of preliminaries will include five, 12-lap heat races. The top 16 drivers in passing points following the events will lock into the 100-lapper; the top eight in the points will also line up in that order for an 8-lap dash this evening with the finish of the race setting the first four rows of the USA Nationals.

Eleven drivers accepted invitations to participate at Cedar Lake as part of the FANSFund, which annually raises money through fan and sponsor donations in an effort to attract additional entrants to the crown-jewel event. The group of drivers will line up by voting order in Friday night’s 12-lap FANSFund Dash, which pays a minimum of $2,500 to win and $1,500 to start and allows the competitors to race for their portion of the fund’s travel money.

Friday’s program, which also includes a full show for Cedar Lake’s NASCAR Late Model division, is scheduled to begin with hot laps at 6:30 p.m. CT. Racing is set to get the green flag at 7:10 p.m.