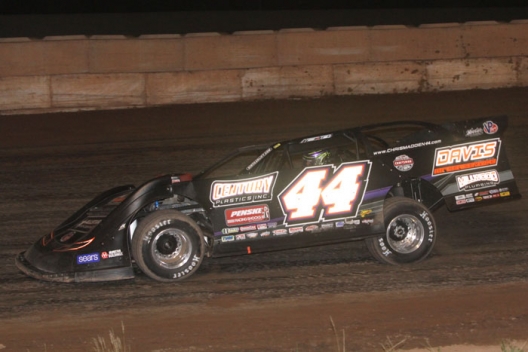 “I needed to win tonight,” Madden said. “I sure did. We’ve been off just a little bit, we’ve been searching for some things, and we needed a win tonight.”

The 43-year-old star from Gray Court, S.C., did just that, dominating the Sun Drop Shootout to earn $10,000 for his sixth World of Outlaws Craftsman Late Model Series victory of 2018. He led the entire 50-lap A-main off the pole without facing a single significant challenge.

Topping off his flawless feature performance, Madden moved back into a tie for the WoO points lead with Mike Marlar of Winfield, Tenn., whose seventh-place finish wiped out his 14-point edge entering the event.

Shane Clanton of Zebulon, Ga., overtook outside polesitter Jonathan Davenport of Blairsville, Ga., for second on lap six and ran in the position for the remaining distance to earn the $5,000 runner-up check, but he never drew close enough to Madden to offer even a cursory challenge. Clanton crossed the finish line 2.240 seconds behind the victor.

Davenport settled for a distant third-place finish, a couple car lengths ahead of fellow Lucas Oil Late Model Dirt Series regular Don O’Neal of Martinsville, Ind., who passed Devin Moran of Dresden, Ohio, for fourth on lap 29 — the only change in position among the top 10 during the race’s second half. The third-starting Moran slipped to fifth in the final rundown.

Madden began the night in a state that certainly couldn’t be considered a slump — since his last WoO win, on July 14 at Ogilvie (Minn.) Raceway, he had registered two second- and two fourth-place finishes — but he was antsy about his performance nonetheless. He was still stewing over his fourth-place run in the July 28 Prairie Dirt Classic at Fairbury (Ill.) American Legion Speedway.

“We let one get away from us over there at Fairbury,” Madden said of his Barry Wright Race Cars house car team. “We had an extremely good car over there and just had some circumstances happen on a (lap-32) restart (a scrape with eventual winner Moran) that kind of took us out of contention to be able to get that win.

“Last night (at Wisconsin’s Plymouth Dirt Track) we missed it just a little bit again (finishing fourth), so we wanted to kind of redeem ourselves tonight and get back on track.”

Madden’s evening started off with a victory in the second heat, albeit one that came with some controversy. After he passed rival Brandon Sheppard of New Berlin, Ill., for the lead in the prelim, Sheppard’s bid to regain command with an inside move in turns three and four ended with B-Shepp spinning.

Sheppard, who ended up starting 17th in the feature due to the twirl and could only manage an eighth-place finish, said Madden “chopped me off” to precipitate his spin. Madden felt differently, saying Sheppard “run into the back of me going down there into three.”

Whatever the case, Madden was in absolute control for the remainder of the program.

“We had a really good effort in the heat race to get us a win and draw up front at this big ol’ place and drew a one,” Madden said. “Everything just lined up the way it’s supposed to line up tonight.”

During the 43-lap stretch of green-flag racing that closed the race, Madden stretched his edge over Clanton to over 3 seconds at some points. His advantage shrank only because the half-mile oval took rubber on the inside lane during the race’s second half, making it more difficult for Madden to deal with lapped traffic.

“I caught one car there a little too fast and had to let off and get me another run at him and make sure I made my move where I needed to make my move,” said Madden, who recorded his 22nd career WoO triumph. “Early I was kind of out in the middle of the racetrack and cutting back left, but it took some rubber about halfway through. We just had to judge where to pass lapped cars at the right time after that.”

Madden’s victory came one year after his debut visit to Shawano ended with a late-charging runner-up finish to Rick Eckert of York, Pa.

“Last year we needed a half a lap and we could’ve won,” Madden recalled. “(Eckert) had a straightaway on me with 10 to go and we were on his door when we come to the checkered flag.

“I honestly thought I could deal with him (after reaching second place from the fourth starting spot) and then that second restart (on lap seven) he just drove away,” said Clanton, who won the 2015 and ’16 WoO events at Shawano. “I knew then the only thing I could hope for is we get in lapped traffic and they box him in and I drive by him on top, but it cleaned up and rubbered on the bottom and we couldn’t even pass a lapped car barely.

“About lap 25 it got to where you needed to be on the bottom. It was pretty much over by lap 25.”

Clanton remained winless on this year’s WoO tour, but he said his failure to reach victory lane can be attributed at least somewhat to bad luck. He experienced misfortune just one night earlier at Plymouth, in fact, retiring from the feature on lap four due to a broken torque arm while running fifth.

“We add it up and that makes number 11 this year that we’ve been running top five and fall out,” Clanton said. “Just bad luck or whatever you want to call … we ain’t been finishing good. It feels good to get a good finish.”

The 34-year-old Davenport wasn’t disappointed in the least with his third-place run, noting that he effectively earned $3,000 for a test session.

“We wanted to run this other (Longhorn) car,” Davenport said of his Lance Landers Racing team’s decision to compete at Shawano before heading to this weekend’s USA Nationals at Cedar Lake Speedway in New Richmond, Wis. “We thought about trying to make some laps somewhere, going to test. We really just needed to make three or four laps to make sure it was fixed.

“It’s the car I qualified with at Wheatland (Missouri’s Lucas Oil Speedway on July 14) and then we put it back up because something was messed up with the steering and we didn’t have time to fix it. We worked on it at Wheatland and we thought we found our problem so we just wanted to make sure we had a good backup car for Florence (the Kentucky track’s Aug. 8-11 North-South 100 weekend). It’s fine.”

The race’s two caution flags both flew on lap seven. First Tyler Bruening of Decorah, Iowa, slowed on the backstretch while running 12th due to a broken oil-pump belt. On the restart Brent Larson of Lake Elmo, Minn., spun out of ninth place in turn four and was clipped by Frank Heckenast Jr. of Frankfort, Ill., damaging the nose of Larson’s car sufficiently that he had to be towed off.

Notes: Madden downplayed the significance of tying Marlar for the WoO points lead. “It’s nice to get back up there, but these points aren’t really bothering me,” he said. “We come to race and have fun. We’re too far away from home and our family not to enjoy it. We’re trying to enjoy it and win races. I’m very competitive. I want to win. I don’t want to run second or third just to try and win a points battle. I want to win races so that’s what we’re here to do.” … Eckert finished ninth after surviving an especially scary lap-seven run-in with A.J. Diemel of Elk Mound, Wis. The two drivers came together in turn three with Eckert’s car bouncing in the car from the blow he took in the left-side door; Eckert lost two spots but maintained control and went on to finish ninth while Diemel placed sixth. … The eventful prelims included a Heat 1 incident that saw Don O’Neal spin between turns one and two after contact to his Clint Bowyer Racing car’s left-rear corner from Marlar. David Breazeale of Four Corners, Miss., and Australian Craig Vosbergen were also swept up in O’Neal’s twirl; O’Neal continued racing, however, and charged from the rear to finish second. … Ricky Weiss of Headingly, Manitoba, was set down for the night by WoO officials after throwing a rock at Craig Vosbergen's car in the pit area and then grabbing Vosbergen's helmet visor as Vosbergen was still in his machine’s cockpit. Weiss was angry about a Heat 1 scrape with Vosbergen that sent him spinning in turn two; he later hit the wall in turns three and four, knocking him from the prelim with rear deck damage. … Chase Junghans of Manhattan, Kan., spun into the inside berm in turn one after tangling with Chris Engels of Green Bay, Wis., during the second heat. Junghans climbed out of his car and gestured angrily to a passing Engels. … Former WoO director Tim Christman attended the event; he co-promoted the show with the group that operates Shawano, which hosted the WoO tour for the ninth straight year.