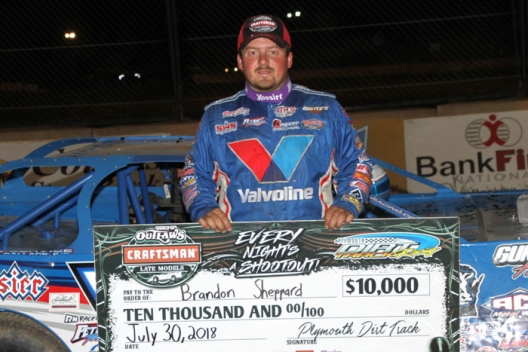 After being outdueled by Moran for a Priairie Dirt Classic victory two days earlier at Fairbury (Ill.) American Legion Speedway, Sheppard gained a dose of redemption in the Badger State, turning back a late-race challenge from Moran to emerge victorious in Plymouth’s 50-lap World of Outlaws Craftsman Late Model Series feature.

Sheppard, 25, of New Berlin, Ill., grabbed the lead from polesitter Tyler Erb of New Waverly, Texas, on lap five and was never headed while maintaining firm control for most of the remaining distance. But to secure the $10,000 triumph Sheppard had to withstand a final, furious bid by Dresden, Ohio’s Moran, who caught the pacesetter in lapped traffic with five circuits left and mounted a last-lap outside charge rounding turns three and four that fell a mere 0.246 of a second short at the checkered flag.

Erb, 21, finished third after leading laps 1-4 and falling as far back as fifth. He rallied on the outside of the quarter-mile oval to come out on top of a tight battle with Chris Madden of Gray Court, S.C., that stretched for the race’s final 13 laps.

A series-leading ninth triumph of 2018 put a smile of Sheppard’s face less than 48 hours after he watched Moran cash the $30,000 PDC check that he wanted.

“We weren’t bad by any means at all at Fairbury,” said Sheppard, who swapped the lead four times with Moran between laps 72 and 79 of the 100-lap PDC before losing touch with the 23-year-old driver and ultimately finishing third. “We just got a little bit free there at the end and Devin could carve around that bottom a little bit better than I could.

Starting third, Sheppard quickly pointed his Rocket Chassis house car toward that goal. He wasted no time surging past Erb for the lead following a lap-four restart.

“I know how Terbo is,” Sheppard said of Erb. “He was pretty well committed to the top, so I thought maybe if I could get beside him off the restart and get through (turns) one and two better than he could on the top then I could get beside down the backstretch and maybe do something.

“It worked out for us. The bottom was just good enough in one and two to where we could get down there and carve around the bottom good.”

Five more caution flags flew through lap 32, largely keeping Sheppard out of lapped traffic and thus allowing him to build as much as a half-straightaway edge over Moran, who passed Erb for second on lap 12. But the race closed with 18 laps of uninterrupted racing, forcing Sheppard to deal with slower cars in the final circuits.

With Sheppard uncertain about moving up on the track to overtake lapped cars, Moran was able to catch the leader on lap 45.

“I didn’t know if that top was still good enough down in three and four to get past ‘em,” Sheppard said. “The problem is, when you get down to one and two you had to be on the bottom, so if I couldn’t have got by (the lapped cars) I would’ve been in no-man’s land in one and two so I didn’t really want to chance it. Luckily, the were messing up just enough to where I could get by one every once in a while off two.

“It was just one of them deals where it was really hard to lead because lapped traffic was all over the place and you didn’t know where to go.”

While Moran closely tailed Sheppard after running him down, he didn’t swing his Tye Twarog-owned XR1 Rocket car to the outside of the track in an attempt to pass B-Shepp until the final set of corners. It turned out to be too little, too late.

“Man, I wish I would’ve went to that top and committed to it just a little bit harder,” said Moran, who started fifth. “I went up there in three and four on the last lap, but I feel like if I would’ve done it right we actually would’ve had a shot.

“I think if I could’ve just seen it two laps earlier, I don’t know if I would’ve passed him, but I at least would’ve got myself comfortable with where I need to be to rip it on that last lap. I didn’t know you could move up in three and four until the last lap, but when I seen Tyler (Erb) ended up third I knew the top must have come in. I wish I would’ve looked up at the scoreboard and seen he was up to third and I would’ve kind of known that the top would’ve been there.

“But congrats to Shepp and them,” he added. “They’ve had a ton of bad luck this year and they still have a chance to win this points deal. It just shows how good them guys are, so to be up there trying to pass them for the win, it’s pretty awesome.”

Moran recovered from a poor lap-32 restart to earn a $5,000 runner-up finish, his 12th top-five run in his last 16 WoO starts. Madden overtook him for second when the green flag flew, but Moran was back in control of the spot the following circuit.

“I couldn’t restart as well as I have been these past couple weeks and (Madden) got in there and got down and I just went even lower below the uke tires,” Moran said. “I passed him without bending any spindles or anything so it was an alright night.”

Erb, meanwhile, worked hard for his third-place finish. He churned up the outside groove following the race’s lap-32 restart, racing neck-and-neck with Madden for most of the green-flag stretch until finally pulling ahead in the final laps.

While Erb was disappointed to again fail to achieve his coveted first career WoO win, he considered his podium finish another step in his chase of that elusive victory.

“The cautions just killed us tonight,” Erb said. “I really needed to keep my speed up. But overall, it was a good night. We’re happy.

“This has been a learning year for sure, to stay dialed in and just mature as a driver,” he added. “The more patient I am the better I seem to do, so I need to take that and move forward.”

The 43-year-old Madden would have liked to finish better than fourth, but his run allowed him to move within 14 points of WoO points leader Mike Marlar of Winfield, Tenn., who finished a quiet eighth in a race that saw him bend up his car’s right-rear bodywork in a bout with the outside wall.

“We passed Devon on that (lap 32) restart and got to second, but we couldn’t enter the corner as good as those guys,” Madden said. “We were probably a third-place car, but in those last two laps … me and Tyler probably run side-by-side for 10 laps or more, and then we run up on a lapped car that was in my lane and that left it open for Tyler and he got third and we got fourth.”

The race’s first caution flag, on lap four, was for Shane Clanton of Zebulon, Ga., whose car limped to a stop with a broken torque arm as he ran in fifth place. He lost fourth place in the WoO standings to Moran as a result of his 26th-place finish.

Other cautions were caused by Brent Larson of Lake Elmo, Minn., who spun in turns one and two on lap seven and in turns three and four on the ensuing restart; Jared Siebert of Luxemburg, Wis., who slowed with body damage on lap 20; Mitch McGrath of Waukesha, Wis., who rode the turn-two wall on lap 23; and debris on lap 32.

Notes: Sheppard’s 33rd career WoO triumph moved him within 44 points of Marlar and 30 markers of Madden as he chases his second consecutive series title. … Jimmy Owens of Newport, Tenn., started on the outside pole and ran in the top five early, but his hopes effectively ended on lap 29 when he caught the turn-four wall and ripped up the right-rear bodywork of his car. He continued racing at the back end of the top 10 with sheet metal dangling behind his machine until retiring for good on lap 41. … The WoO victory lane ceremonies weren’t held immediately after the feature’s checkered flag; with the track’s 10 p.m. midweek curfew looming and one support-division A-main still to go, officials postponed Sheppard’s celebration until the very end of the program. … Jimmy Mars of Menomonie, Wis., who won a Dirt Kings Tour event at Plymouth last year, saw his night end after time trials due to engine trouble. … The event was a co-promotion between SLS Promotions’ Steve Sinclair and Bob Cullen, a Wisconsin resident who fields the cars driven by fifth-place feature finisher Brian Shirley.