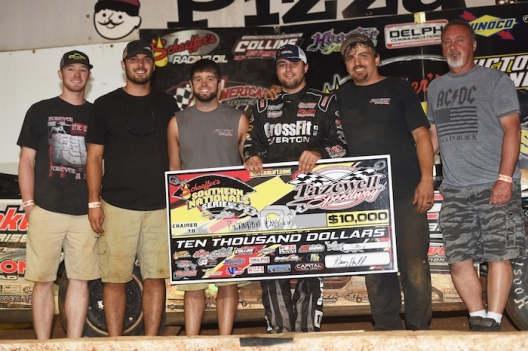 TAZEWELL, Tenn. (July 28) — Just when it looked like Michael Chilton of Salvisa, Ky., was headed for the biggest win of his career, Brandon Overton of Evans, Ga., had other plans.

Sliding ahead of Chilton as the pair exited turn two, Overton retook the lead with just three circuits remaining in Saturday’s 53-lap Schaeffer’s Southern Nationals Series finale, holding on through the final distance to score a $10,000 victory at Tazewell Speedway.

“The fans got their money’s worth tonight,” Overton said after the race. “I got out front and (crewman Grant) Pearl was telling me I was good and then all of a sudden he closed them sticks up. I said, ‘Oh, man.’ I had a little bit of trouble with that lapped car. When I went around Michael (Chilton), I run in the wall. I said, ‘I’m going to have a flat.’ I knocked the tow and stuff out. I could just feel it. The steering wheel was all crooked. But man, that was awesome.”

Starting outside the fourth row, Overton worked his way through the front of the field to run in third when a yellow flag slowed the field on lap 31. Using momentum from the restart, Overton powered around the top side, overtaking Chilton to lead lap 31. But the race was far from over.

As Overton approached the tail of the field on lap 40, Chilton began closing the gap between himself and the race leader, slipping under the No. 76 to lead lap 44. With the pair continuing to work their way through lapped traffic, Overton remained right on Chilton’s back bumper, pulling back ahead on lap 50 en route to his fifth series victory of the season.

“The track was good,” Overton said. “This new car, places that I’ve not been, it just takes me a little bit to get it dialed in. I was bad off in the heat race and qualifying and everything and finally got it tuned up for this race and it showed.”

Slipping past Chilton in the final laps, fifth-starting Donald McIntosh of Dawsonville, Ga., ran second, with the Kentucky driver settling for a third-place finish at the checkered flag. Forced to pull out a backup car after damaging his Blount Motorsports entry during time trials, Casey Roberts salvaged a fourth-place finish, with Dale McDowell of Chickamauga, Ga., rallying from the tail to finish fifth after suffering a mid-race flat tire while leading.

Starting outside the front row, it was McDowell charging to the front of the field at the drop of the green flag. With Chilton closing in on the race leader in lapped traffic, the pair raced side-by-side on lap 20, making slight contact as they battled for the race lead. As McDowell headed to the pits with a flat tire under a lap-21 caution, Chilton inherited the lead, showing the way out front before eventually falling to Overton.

Chilton’s disappointment was visible after the race, as he expressed his displeasure with Overton’s final slider for the lead.

“We lead for a while there and Brandon (Overton) got around us in lapped traffic,” Chilton said. “He wasn’t quite cleared of me on the backstretch. But it is what it is. We’ll remember it next time. We’ve raced together quite a bit already and raced clean I thought. But for $10,000, I guess you can wreck somebody. That’s what it is. It was either turn him in the fence and wreck us both or just lift and run third.”

Notes: Winning the Southern Nationals finale for the second straight season, Overton scored his 10th career series victory. … Roberts clinched the Southern Nationals title for the second time in his career, capturing the championship for the first time back in 2015. … A red flag fell on lap seven for a turn-four melee that resulted in Kenny Collins rolling his No. 1C machine. He climbed from the car apparently uninjured. … A yellow flag waved on lap 21 for the slowing Mitchell Burke; race leader Dale McDowell pitted under the caution with a flat tire. … Steve Smith slowed with a flat tire to draw a caution on lap 30. … The final yellow flag flew on lap 31 when Vic Hill slowed with a flat tire.

Polesitter Michael Chilton edged ahead of fellow front-row starter Eric Wells to lead the first lap, with Carder Miller and Kenny Collins battling for third in the early running. Chilton began stretching his lead at the halfway mark, with Miller continuing to hold off Collins as the pair raced side-by-side. Making slight contact with the frontstretch wall, Miller fell to Collins in the final laps. Chilton won the consolation, with Wells running second and Collins rounding out the podium in third.

Polesitter Dale McDowel shot to the lead at the drop of the green flag, with second-running Donald McIntosh attempting to reel in the race leader at the halfway mark. Never challenged for the lead, McDowell won the heat, with McIntosh finishing second and Brandon Overton running third.

Charging around the top of the racetrack, outside polesitter Chad Ogle edged ahead of fellow front-row starter Ivedent Lloyd Jr. to take an early lead. With Ogle holding a comfortable lead at the halfway mark, the top-two cars distanced themselves from the field, as Casey Roberts worked his way from the tail to run in fifth on the seventh circuit. Ogle pulled away to win the heat, with Lloyd and Steve Smith rounding out the podium. Roberts ran fourth after starting on the rear of the field.

Tripping the clock with a time of 11.813 seconds, Ivedent Lloyd Jr. of Ocala, Fla., was the overall fastest qualifier for Saturday’s Southern Nationals finale at Tazewell. Lloyd will start on the pole of the night’s first heat race. Other heat race pole sitters will be Dale McDowell of Chickamauga, Ga., and Michael Chilton of Salvisa, Ky.

Making hard contact with the wall as he exited turn two on his first qualifying lap, series points leader Casey Roberts failed to clock a time. His No. 101 heavily damaged, the Blount Motorsports team quickly began unloading a backup car. Dakotah Knuckles of Ewing, Va., also failed to record a time after getting into the turn-two wall during his time trial session.

Tazewell is the only track to ever host the Southern Nationals finale. … All drivers in attendance for Friday’s rained out show at Smoky Mountain Speedway in Maryville, Tenn., received equal show-up points. … Ross Bailes of Clover, S.C., has rejoined the field at Tazewell after posting a runner-up finish in the July 21 series stop at Swainsboro (Ga.) Raceway. … Dakotah Knuckles of Ewing, Va., is the defending Tazewell track champion He was also the winner of the Spring Nationals event at the high-banked oval on April 13. … Noticeably absent from the Southern Nationals field is Joey Coulter of Concord, N.C., who is forgoing Tazewell for Saturday’s Ultimate Southeast event at Dixie Speedway in Woodstock, Ga. Coulter was sixth in points heading into the series finale. … Chad Ogle of Sevierville, Tenn., is making his first series start of the season at Tazewell. He’s a former Iron-Man Series winner at the East Tennessee oval. … With his World Racing Group suspension keeping him out of Fairbury (Ill.) American Legion Speedway’s Prairie Dirt Classic, it was rumored that Scott Bloomquist of Mooresburg, Tenn., would be on hand for Saturday’s Tazewell event. But he is not among the field for the Southern Nationals finale.

Brandon Overton of Evans, Ga., a four-time winner on the 2018 Southern Nationals tour, was the winner of last year’s series event at Tazewell. Among other recent Tazewell series winners expected to be on hand Saturday night is Vic Hill of Mosheim, Tenn., who won at the high-banked East Tennessee oval in 2015 and 2011.